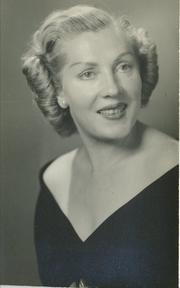 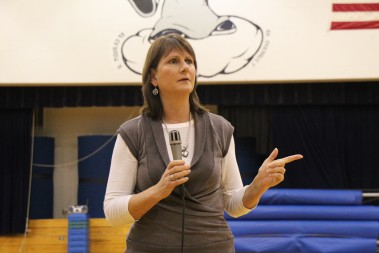 FORT WAYNE — The inspiring story of one young woman’s steadfast faith and courage in the face of unfathomable circumstances was told and retold across the Diocese of Fort Wayne-South Bend recently. Jeannie Opdyke Smith, the only child of Holocaust rescuer Irene Gut Opdyke, visited all four Catholic high schools and the Brookside Mansion at the University of Saint Francis proclaiming her mother’s powerful message that “one person can make a difference.” The Jewish Federation of Fort Wayne sponsored the presentations.

Irene Gut Opdyke was a 19-year-old high school graduate beginning her first year of nursing school when Hitler invaded her home land of Poland. As a Polish Catholic cut off from her family, she joined the Polish underground working with a small group in a forest to fight the atrocities forced on the Jewish population of the area. At one point she was captured, severely beaten, raped and left for dead. She was taken to a Russian hospital where she recovered and eventually escaped. As she moved through town she witnessed more of the murderous atrocities the Nazis perpetrated against the Jews of the area. It was then that she vowed to take every opportunity to help.

During the time she was housekeeper to a high-ranking German soldier, she hid a dozen Jewish people she had met in a German factory’s laundry, in the cellar of the soldier’s very home. Eventually they were discovered and the soldier promised her secrecy if she would serve as his mistress. To save her friends, Opdyke agreed.

After much heartache and atrocity the Nazis were eventually pushed out of Poland and Opdyke was able to move her Jewish friends out of hiding into safety.

She was again captured, this time by Russians who restrained her in a camp, from which she eventually escaped. Once in a camp for displaced persons she discovered that her parents had died during the war. And after being invited by a kind United Nations diplomat to immigrate to the U.S., Opdyke boarded a ship and made her way to America where she eventually became a U.S. citizen.

The day she was granted citizenship she met the very man who five years before had invited her to the U.S. while she was in the displaced persons camp. They married soon after and made their way to California where Opdyke became a much sought after interior designer who kept her past safely locked in her heart.

Growing up with this faith-filled woman as mother, Smith learned with “absolute positive assurance that our lives were in God’s hands.”

“I never saw her (Opdyke) fret. She was at peace,” she said. “She believed that God could make beauty out of the ashes we found ourselves in. My faith really comes from her example.”

Smith, who noted that she was unaware of her mother’s heroic past until she was 14 when her mother told her story to a student writing a paper on the myth of the Holocaust, said it was then that her mother realized that by keeping her past secret she was perpetuating evil. And she began to tell her story across the country.

“It’s very common for survivors to come to another country and put it all behind them,” said Smith.

Following her 85-year-old mother’s unexpected death in 2003, Smith, a self proclaimed introvert, “picked up the torch,” rising to the public speaking challenge in her mother’s stead inspiring audiences of all ages in schools, churches, camps, organizations, fund-raising groups and clubs throughout the United States. She is part of a new generation of Holocaust speakers called “2nd Generation” who share the life stories from their parents’ firsthand experiences. She is a member and speaker for the Oregon and Washington Holocaust Speakers Bureau, a regular speaker for the Anti Defamation League as well as the Bearing Witness Program, international speaker for the Jewish Federation across the United States.

Smith speaks on her mother’s behalf so her message of love and forgiveness will replace hatred — one person at a time.

“History keeps repeating itself,” Smith said. “Holocausts, genocides and bullying happen all over the world.”

“If we can’t get these joint numbers to get involved, then we have to do it on an individual basis,” she said.

Smith begins her presentation reminding her audience that her heroic mother was just like them — a bystander.

“The truth is each one of you could do what my mom did. Each one of us has the opportunity, the choice,” Smith said.

Smith speaks to the young because “they are the future generation. We have to start with the youth. Their values and opinions are still being formed,” she said. She wants everyone to know that her mom was not a powerful political figure but a young Catholic girl who was away from home with no family to support her.

“But she still made a difference. No matter your background or how much money you have, you can do little things to make a difference,” she said, encouraging her audience.

“Love and forgiveness are the strongest influences. They can open the hardest heart and the closed mind,” concluded Smith.

One of Smith’s favorite teachings imparted by her mother that she shares across the country is, “Hate is easy. It takes real courage to love.” Irene Gut Opdyke was truly an example of real courage.

The Israeli Holocaust Commission named Irene one of the Righteous among the Nations, a title given to those who risked their lives by aiding and saving Jews during the Holocaust. She was presented with the Israel Medal of Honor, Israel’s highest tribute in a ceremony at Jerusalem’s Yad Vashem Holocaust Memorial. The Vatican has given Irene a special commendation and her story is part of a permanent exhibit in the United States Holocaust Memorial Museum in Washington, D.C. In 2008 Irene was presented posthumously the Commanders Cross — the Polish medal of honor, given by the president and first lady of Poland and in 2009 Irene was presented posthumously the Courage to Care award by the Anti Defamation League in a special ceremony in Washington, D.C. Both of these awards were accepted by Jeannie Smith.

Opdyke has written her story in “In My Hands: Memories of a Holocaust Rescuer,” (Knopf/Random House) and a Broadway play titled “Irene’s Vow,” portrays her powerful story for the masses.