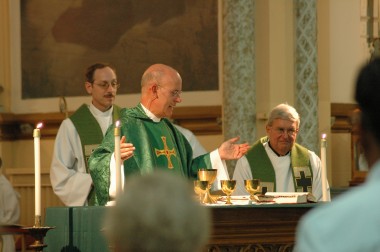 FORT WAYNE — Just as Catholic priests traveled to serve rural Americans in pioneer days, diocesan priests and seminarians went to the Hispanic community at first to minister to their needs.

“Father Peter Forrestal was a Holy Cross priest who taught Spanish in Texas and taught at Notre Dame,” Father Lemos recalled. “I don’t know all the details, but he went out on his own to the people living on the farms to minister to them. Joe Ruetz (father of Father Ed Ruetz) of the St. Vincent de Paul Society and Father Forrestal were a team, and ministered to Hispanic families for their pastoral and social needs.”

Father Lemos explained that Hispanics came from Texas in the 1940s, ‘50s and ‘60s to pick crops and work on farms. They stayed in camps on or near farms, working long hours for their pay. Many in the camps would not have made it to church due to limited transportation, so the priests went to them.

“Father Forrestal’s friends in Texas gave him money for a bus,” Father Lemos said. “Father Forrestal got (the seminarians) excited about Hispanic ministry and (those) who could drive drove the bus to the farms.”

The bus was used to transport the migrant workers to St. Stanislaus Kostka Church in New Carlisle and then to Holy Family Church, he said. Hispanics could attend Mass and the children could attend religious-education classes. The seminarians would teach children to play the guitar and music for Mass, take groups on picnics and organize other activities.

“They prayed and worked for the day when they would have an Hispanic parish,” Father Lemos said.

By 1968, Father Lemos said the Hispanic community was growing in the South Bend area and many were moving from the farms to live in South Bend.

“Father Forrestal knew he needed to get a home for the Hispanic community that was growing …,” Father Lemos said.

In April of 1968, members of the Guadalupana Society celebrated the community’s first Mass at St. Stephen King of Hungary Parish.

FAther Forrestal had also celebrated Mass in Spanish at St. Mary of the Assumption.

Many of the seminarians involved at the time either knew Spanish or were studying it and went on to become missionaries in Chile, South America. Father Lemos had an advantage in learning the language; having grown up in California, he started learning Spanish in seventh grade.

Still, working with the Hispanics in South Bend “helped me learn my Spanish,” he said.

At this point, Father Forrestal was aging, so some Spanish-speaking priests studying at Notre Dame helped out at Masses, Father Lemos said. Then with Vatican II, Mass went from being said in Latin to English and Spanish.

By 1972, Bishop Leo Pursley saw how the Hispanic community had grown and the diocese purchased a car service station in the Milford area, Father Lemos said. The site became the home of Our Lady of Guadalupe Parish about a year later.

Holy Cross Father Bob Baker was hired by the diocese to be the vicar for the Hispanic community from Milford and Plymouth to South Bend in 1972, Father Lemos said. Hispanic ministry offices were opened in South Bend and Fort Wayne and Father Baker was considered the administrator of Our Lady of Guadalupe.

The pastoral team of the Spanish Speaking Ministry Office worked out of the South Bend Catholic Charities building, while Father Carlos Rozas worked as vicar for Hispanic Ministry at St. Paul’s Parish in Fort Wayne.

The Sisters of St. Joseph of the Third Order of St. Francis also got involved as part of the team.

By 1973, the need for youth ministry was becoming apparent, Father Lemos said. Father Phalen helped start a singing group with Benito and Berta Salazar and a youth group was started around singing called “La Vida” (the life). Later, a place was needed for the gathering youth so a house, which had been an old Polish neighborhood department store, became La Casa de Amistad, Father Lemos said. This grew into a youth center, which still exists but is no longer formally connected to the Church.

Later, Father Korcsmar went to serve as administrator of Our Lady of Guadalupe and took care of the Goshen and Plymouth communities.

From 1977 to 1979, Father Lemos was pastor of the Milford church. By 1980, Bishop William McManus reinforced the idea of moving Hispanic ministry from an office directly to the parishes. Then Father Lemos was named pastor of St. Stephen, with Father Phalen as associate pastor.

In 1986, Father Lemos was reassigned to Phoenix, Ariz., and he stayed there eight years. Father Phalen was assigned to an Hispanic parish on the east coast.

Other priests serving the community included Holy Cross Father David Porterfield (July 2001), who moved with the parishioners of St. Stephen Parish to merge into St. Adalbert Parish in the summer of 2003, and Holy Cross Father Chris Cox, (July 2004), who helped to develop a community-organizing organization called TAP, that the Hispanics are very much involved in.

Hispanics have continued to work in the community in factories, restaurants, grocery stores and as students at Saint Mary’s College, Holy Cross College, Ivy Tech, the University of Notre Dame and Indiana University-South Bend.

“In the 1970s and ‘80s, it was hard to get them to think beyond high school (for education),” Father Lemos said. “A lot of their families worked in the fields. … It’s wonderful for me to come back here and see so many going to college.

“Again, when I returned from 10 years in Colorado, a third time to serve the Hispanics on South Bend’s West Side in December 2010, I saw even more growth, such that now there are two Spanish Masses at Our Lady of Hungary Parish with their new bilingual pastor, Father Kevin Bauman,” Father Lemos said.

Hispanics are now working as lawyers and bankers as well, Father Lemos said.

“I thought I was going to be spending my life in Chile being a missionary,” Father Lemos said, “but there was a mission right here in my back yard. … I don’t feel I do ministry by myself. The Holy Cross community made a commitment to the Hispanic community in the South Bend area. For me, Holy Cross is my family, and it is as the Holy Cross Religious Community that we are grateful to be able to serve.”

Father Lemos also has enjoyed working in this ministry.

“I’ve learned to be a good priest because of the good people,” he said. “It’s a joy to see how important faith is in the life of Hispanics … they live the Gospel and are taking ownership and responsibility for themselves.”