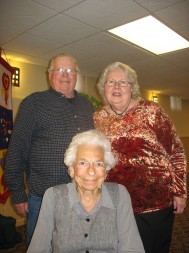 Jim and Sharon Garman (standing), co-president and secretary, respectively, of St. Michael and St. Anthony of Padua Harvest House movement, pose for a photo with past president Mary Ann Heitz. Jim was a maintenance worker at Immaculate Conception Parish, Auburn, and Sharon served as the director of religious education at St. Michael, Waterloo.

This Scriptural passage from the Gospel of St. Luke certainly applies to the St. Michael/St. Anthony Harvest House movement. The two parishes — St. Michael the Archangel in Waterloo and St. Anthony of Padua in Angola, have joined together for the purpose of mutual understanding, self-help and community service in a movement called Harvest House.

Founded in 1972 by Holy Cross Father Louis J. Putz, in South Bend, Harvest House was set up in the Diocese of Fort Wayne-South Bend as a six-point program to help adults age 55 and over assert themselves as an important part of our society, said Jim Garman, co-president of the combined group. The six-part program includes social awareness, service to others, new religious experiences, continuing education, celebration and recreation, and community involvement.

Officially, Harvest House is dedicated to the purpose that older adults acknowledge their value and their dignity, and that they come together in organization to remain active and alert members of society.

As part of their “social awareness” program, Harvest House groups meet on the fourth Thursday of the month, usually at 11 a.m. The rosary is recited at 11:10 a.m. followed by Mass at 11:30 a.m. A carry-in pot luck follows with entrees prepared by one or two volunteer members or a luncheon is held at a local restaurant.

“After lunch we often have a speaker to fulfill the “continuing education” portion of our group, but if no one of interest is available, we play Bingo,” Jim Garman said. On the day that Today’s Catholic visited the monthly meeting in Waterloo, the speaker was Marsha Wright, Garman’s classmate, who presented a program about Margaret Ringenberg, born in Fort Wayne, who began her aviation career in 1943 during World War II when she became a ferry pilot with the Women Airforce Service Pilots (WASP). She logged more than 40,000 hours of flying time during her career.

To provide “service to others,” members volunteer at local nursing homes, call on shut-ins and on those who are ill, and transport the elderly to Mass, meetings and other functions, Garman continued.

Once a year all the groups attend Older Americans Day held at various parishes. This year, it will be held on June 9 at St. Michael’s, Waterloo, and will follow the same monthly meeting format. As part of a “new religious experience,” members are encouraged to volunteer as lectors, Eucharistic ministers, ushers and greeters at Mass.

“Each meeting includes a ‘celebration and recreation’ portion,” said Jim, “with a social hour of games or videos of vacation trips and presentations on various subjects. We acknowledge birthdays, anniversaries and send cards to the sick and shut-ins.”

With regard to “community involvement,” the groups write letters to area representatives on subjects such as right-to-life and senior citizen concerns, Garman explained. Members work on election boards and drive people to the polls. “We also support many local charities in Steuben and Dekalb counties, such as the St. Martin ministries in Garrett and shelter ministries in Angola,” he continued. “We also donate to the parish for the scholarship fund and the youth group,” he said.

Garman proudly recalled how their organization helped an area police officer who was injured, providing for many of his needs during six months of recovery.

“I think we’ve done many charitable things for being such a small group of only about 20 people,” added Mary Ann Heitz, past president.