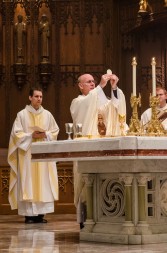 Bishop Kevin C. Rhoades celebrates a Mass for the Pope in thanksgiving for the election of Pope Francis on Monday, March 18, at the Cathedral of the Immaculate Conception in Fort Wayne. Bishop Rhoades is wearing a chasuble with a St. Francis of Assisi depiction. In his homily, Bishop Rhoades said, “Cardinal Bergoglio’s choice of St. Francis of Assisi as his namesake gave me the greatest joy. Describing the birth of St. Francis, the great Italian poet Dante Alighieri wrote that ‘a sun was born into the world.’ St. Francis was truly a giant of Christian holiness who played a great role in the renewal of the Church in his day. He was a living icon of Christ. His ideal in life was ‘to be like Jesus, to contemplate Christ in the Gospel, to love him intensely and to imitate his virtues’ (Benedict XVI). In the life and words of St. Francis, we see the fulfillment of the first Beatitude: ‘Blessed are the poor in spirit, for theirs is the kingdom of heaven.’ ”

The following is the text of the homily of Bishop Rhoades at the Mass for Pope Francis in the Cathedral of the Immaculate Conception on March 18th.

Last Wednesday, March 13th, after the white smoke came forth from the chimney above the roof of the Sistine Chapel, the world’s attention focused on the balcony, the loggia, of Saint Peter’s Basilica. Millions awaited with great anticipation the announcement and the appearance of our new pope. I was in a room in the Archbishop Noll Center with many of our diocesan employees and members of the local media.

The excitement grew during the hour of waiting. Finally, the doors opened and Cardinal Tauran said the traditional words: Annuntio vobis gaudium magnum; habemus Papam. “I announce to you great joy; we have a Pope.” The crowd in Saint Peter’s Square cheered with jubilation as the Cardinal revealed the identity of the new successor of Saint Peter: Cardinal Jorge Mario Bergoglio and his chosen name of Francis. And then Pope Francis came out on the balcony for the first time. It was indeed a moment of great joy, not only for the huge crowds in Saint Peter’s Square, but for people around the world.

I think most of us were very surprised since Cardinal Bergoglio was not one of the top names that had been circulating in the news about the possible new pontiff. There was great joy in the fact that we have the first Pope from the Americas, the first Jesuit Pope, and the first Pope to choose the name Francis.

Cardinal Bergoglio’s choice of Saint Francis of Assisi as his namesake gave me the greatest joy. Describing the birth of Saint Francis, the great Italian poet Dante Alighieri wrote that “a sun was born into the world.” Saint Francis was truly a giant of Christian holiness who played a great role in the renewal of the Church in his day. He was a living icon of Christ. His ideal in life was “to be like Jesus, to contemplate Christ in the Gospel, to love him intensely and to imitate his virtues” (Benedict XVI). In the life and words of Saint Francis, we see the fulfillment of the first Beatitude: “Blessed are the poor in spirit, for theirs is the kingdom of heaven.”

Many have already noted Pope Francis’ simplicity and humility and his love for the poor. In the first days of his pontificate, we have also seen his love for the Blessed Mother, traveling across Rome on the first morning after his election to pray and place flowers at the image of the Blessed Virgin Mary that is venerated in the Basilica of Saint Mary Major.

Saint Francis of Assisi loved the Blessed Mother and prayed: “Blessed Virgin Mary, no one like you among women has ever been born in the world, daughter and handmaid of the Most High King and heavenly Father, Mother of our Most Blessed Lord Jesus Christ, spouse of the Holy spirit. Pray for us…. to your most blessed and beloved Son, Lord and Master.” Today, we gather at this Mass to pray for our new Holy Father. Let us especially entrust him and his papal ministry to the intercession of Mary Most Holy.

In his first words from the loggia of Saint Peter’s, Pope Francis spoke of the Church of Rome presiding in charity over all the Churches. In these words, he was referring to an ancient testimony given by Saint Ignatius of Antioch at the beginning of the second century. The bishop Ignatius, on his way to martyrdom in Rome, referred to the Church in Rome as the community that presides over charity. This expresses the primacy in that communion of charity which is the Church, a communion that includes the service of authority, the ministry of Saint Peter and his successors.

When Jesus conferred the primacy on Saint Peter, he first asked him three times: “Simon, son of John, do you love me?” When Peter affirmed his love, our Lord commanded him to feed and tend his sheep. Peter and his successors are empowered by the Lord to feed the Church with the word of God, to teach the Gospel with authority, and to shepherd and lead the people of God throughout the world.

By the will of Christ, Peter and his successors have been placed over the apostles and their successors, the bishops, as the visible source and foundation of our unity of faith and communion. Jesus founded the Church and established the papal primacy to serve the Church’s unity in faith and love throughout the world. It is Christ’s will that the successor of Peter exercises his authority in a spirit of humble service and with the aim of preserving the Church’s unity. This universal pastoral mission of the Pope is a very heavy responsibility and entails a profound participation in the mystery of the cross. That is why it is so important that we pray for our new Pope, that he will have the strength from the Lord to carry the cross and to fulfill his tremendous responsibilities faithfully and well.

On the loggia of Saint Peter’s last Wednesday, Pope Francis said to the immense throng of people: “pray for me.” His words were addressed to all of us. So this evening, at this holy Mass, we pray for Pope Francis. May Jesus, the eternal Shepherd, bless his Vicar on earth! May Mary, the Mother of the Church, and Saint Francis of Assisi intercede for Pope Francis that he may be a good and holy shepherd after the heart of Christ!