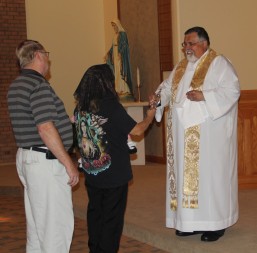 Father Dan Cambra, a priest of the Marians of the Immaculate Conception, hands a first-class relic of St. Faustina to a parishioner for veneration during a mission at Immaculate Conception Church in Auburn. Father Cambra discussed the Divine Mercy message and its devotion at a recent interview with Today’s Catholic.

“The devotions of Divine Mercy is what is unique about St. Faustina’s revelations,” Father Cambra told Today’s Catholic after a presentation at Immaculate Conception Parish in Auburn in October. “St. Faustina received a series of revelations — over 80 — from Jesus Christ explaining to her what His will was for all of us to show gratitude to God’s mercy.”

The other side of the discussion is the message of Divine Mercy. “It is impossible to talk about God without talking about God’s mercy,” Father Cambra said, “because God’s mercy is mentioned in every single liturgy of the Eucharist” — in the opening prayers, the preface to the Eucharistic canon, the canons themselves.

When it comes to talking about mercy, “we always begin with the Scriptures,” Father Cambra said. “There is not a single book in either the Old Testament or the New Testament that in one way or the other does not talk about God’s mercy.”

After studying the diary of St. Faustina, theologian, psychologist and healing minister Father George Kosicki realized that the Divine Mercy message could be summarized in three simple Scriptural verses. He called them the ABC’s of mercy.

Matthew’s Gospel 7:7 says: “Ask and you shall receive.”

“Ask for the things that you need,” Father Cambra said, “to become the saint you are called to be at Baptism.”

“B” stands for “be merciful.” Again, from Matthew’s Gospel 5:7: “Blessed are the merciful, for they shall obtain mercy.”

Father Cambra said, “Sometimes we forget, even though we say the Our Father every day … the command to be merciful is a kernel of how we are to live out our Baptismal promises.”

In the Our Father, one says, “Forgive us our trespasses, as we forgive those who trespass against us.”

“If on the other hand we genuinely attempt to show mercy towards others by forgiving them, even if they don’t deserve it, even if they don’t ask for the forgiveness — to forgive them. Then we are doing what St. Therese the Little Flower called ‘taking that first little step.’”

St. Therese talked about the importance of taking those first little steps “to show God that you are trying to do His will,” Father Cambra noted.

When St. Therese referred to herself as a “little child,” she told St. Faustina, in St. Faustina’s “Diary”: “Unless we take those first steps, like just any other child, God our heavenly Parent, is going to scoop down, pick us up, take us up the staircase to heavenly glory in His bosom because that is what a parent does, because that’s what God does, because God is love. And He can’t be anything other than love.”

St. Francis de Sales said, “Love is the flower, and mercy the fruit.”

“God certainly pours His love into our lives,” Father Cambra said. “But as we read in the Gospel, ‘We’re called to bear good fruit.’ If we fail to bear good fruit, He’s going to prune us. And after He prunes us, if we still are resistant to His will, then I’m afraid we end up in the trash pile, in the burn heap.” It’s in the Gospel.

“C” stands for “completely trust in God’s providential care for you, complete confidence in God’s trust for us.”

In Romans 4, St. Paul talks about Abraham, and because Abraham trusted in God’s providential care for us, God made him the father of all those who would follow in his example of trust. Abraham becomes our father in faith precisely because of his trust, Father Cambra said.

“You and I are called to trust,” he said.

Returning to St. Therese’s conversation with St. Faustina, St. Therese said: “The only thing that separates saints from sinners is their ability to trust.”

Despite her lack of education, St. Faustina desired in her heart to be a saint for God. She asked St. Therese how to do this. St. Therese told Faustina, “First you have to get better at trusting.”

People ask Father Cambra, “How do I grow in trust?”

Father Cambra remarked, “I say, ‘Were you not listening, Ask, and you shall receive.’”

It is in the everyday life experiences — picking up laundry after the children — that we embrace the cross, noted Father Cambra. “A mother loves her children despite how badly they behave at times, and it is precisely in those moments that you realize how much God loves you,” Father Cambra said.