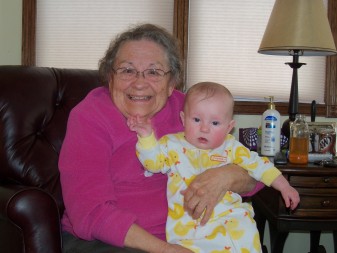 St. John the Evangelist senior Pat Turco is shown at home with her great-granddaughter, Saphirra, who along with mom recently moved into Pat’s Goshen home.

GOSHEN — St. John the Evangelist senior Pat Turco is known as “Grandma Pat” to the Goshen parish’s youth and has dedicated many years of service to not only St. John youth but also youth around the country with her involvement in the Catholic HEART Workcamp.

Turco was born and raised in Detroit. She attended Catholic schools, graduating from Holy Redeemer High School. One aunt was a nun and an uncle was a priest and she said, “My aunt and uncle did a lot to make me the person I am today.”

As a young adult she worked as a waitress at Jack and Jill Dude Ranch and also as a USO hostess and said she had “a blast.” She met her husband Jim at the dude ranch, about whom she said, “He was an absolute gentleman. I’ve never been treated as good as Jim did.”

Turco became a licensed practical nurse and worked in a hospital where she said she “caught a bug that almost killed me, but it changed my life. … When the Lord opened up my eyes it’s been a brand new life and a much closer one to God.”

Pat and Jim married a year after they started dating and moved to Fort Benjamin Harrison in Indianapolis. After Jim got out of the service they bought a house in Muskegon, Michigan. The couple had four children — Raymond, Brian, Kathy and Steven — but they also lost four babies.

“Life was a challenge and I enjoyed challenges,” Turco said. “We just counted on God in everything. “

Turco started teaching Sunday School when they lived in Muskegon and said, “That’s when I got bit by the Holy Spirit.” 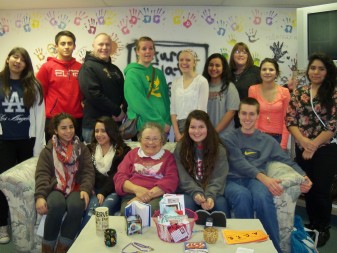 The family moved to the Goshen area around 1980 and began attending St. John the Evangelist. Jim passed away about seven years after they moved to the area.

Turco said, “God talks to me in different ways. So with my two-year certificate in hand I bravely went up to the person in charge of religious education at the time and told her I was qualified to teach. So she asked, ‘Would you like to teach second grade?’”

Turco has continued to teach since then and said when the kids in her religious education classes moved up to youth group she followed them and started helping with the youth group, too.

When with the youth group she said she’s not there to push her ideas on the kids but to reinforce what Youth Minister Sarah Knight teaches them. She said Sarah does “a fabulous job with these kids” but said she does see a need for the part she plays in the ministry. Turco said every week prior to helping with the youth, “Before I do anything the Lord and I have a discussion,” she said.

Sarah Knight said, “So many older people feel they have no part to play — especially with teens — but these kids listen to every word she says. Especially with the climate of today with respect for life — not just the unborn but also the elderly — she’s a perfect example of having so much to give. She plays an integral role on Wednesday nights.”

The kids seem to think so, too. TJ Longacre said, “She feels like another grandma. She’s always able to relate stories to the things we’re talking about and things going on in our lives.”

Pat Turco and her daughter, Kathy, just came back from a conference in Florida with the people who organize the annual HEART youth workcamps. The mother-daughter duo takes charge of chaperoning St. John’s youth when they attend the service camp and host teens from other states that come to the area. The organization sends a staff team to conduct the camp. Kathy is the local manager and the local site the last few years has been in Mishawaka.

After a hard day’s work in the community the kids have dinner at 5 p.m. and it’s always served cafeteria-style. Turco said she was inspired to pass out napkins.

“It’s really a nothing job,” she said. “But I decided to pass out napkins so the kids have to come to me and they don’t get a napkin unless they smile at me. So, I’m the napkin lady and by the end of the week I have these kids right where I want them.”

But Turco doesn’t only take care of youth. As an LPN she worked in a local nursing home. “It was a wonderful time. I enjoyed taking care of the people,” she recalled. “When I put people to bed I’d ask if they wanted me to pray with them and would pray with the ones who wanted to. I think that brought me closer to them. “

Now, along with Kathy, she’s been helping to care for a senior autistic parishioner — an uncle to the music director’s wife.

“These things just pop up. I didn’t go to Becky (Royal) and say I want to take care of him. Becky heard of my experience and asked if we’d take him out to lunch,” she said.

She said Becky warned her that Uncle Jim Brownell wouldn’t go to church. Undaunted, Turco would say, “This is where Becky’s husband plays organ; you have to come in and listen.” Or she’d ask, “Would you like to go in and talk to Jesus? Whenever you want to leave; we’ll leave. We’ll walk right back out.”

At first he fell asleep, but after about a year he met with Father Christopher Smith, who was pastor at the time and after receiving Reconciliation, he was baptized.

“If you treat people with respect that’s the name of the game, no matter how old or how challenged they are,” she said. “You don’t take them down a rosy path. Take them where they are, walk with them and go from there.”

She used to bring Eucharist to the homebound and she’s a proclaimer of the Word.

“I feel the Lord puts you where He feels you can do the most good and puts you in situations so He can help you, too,” Turco said.

“I’m a very happy person,” she said. “And smart enough to know that God is in control.”