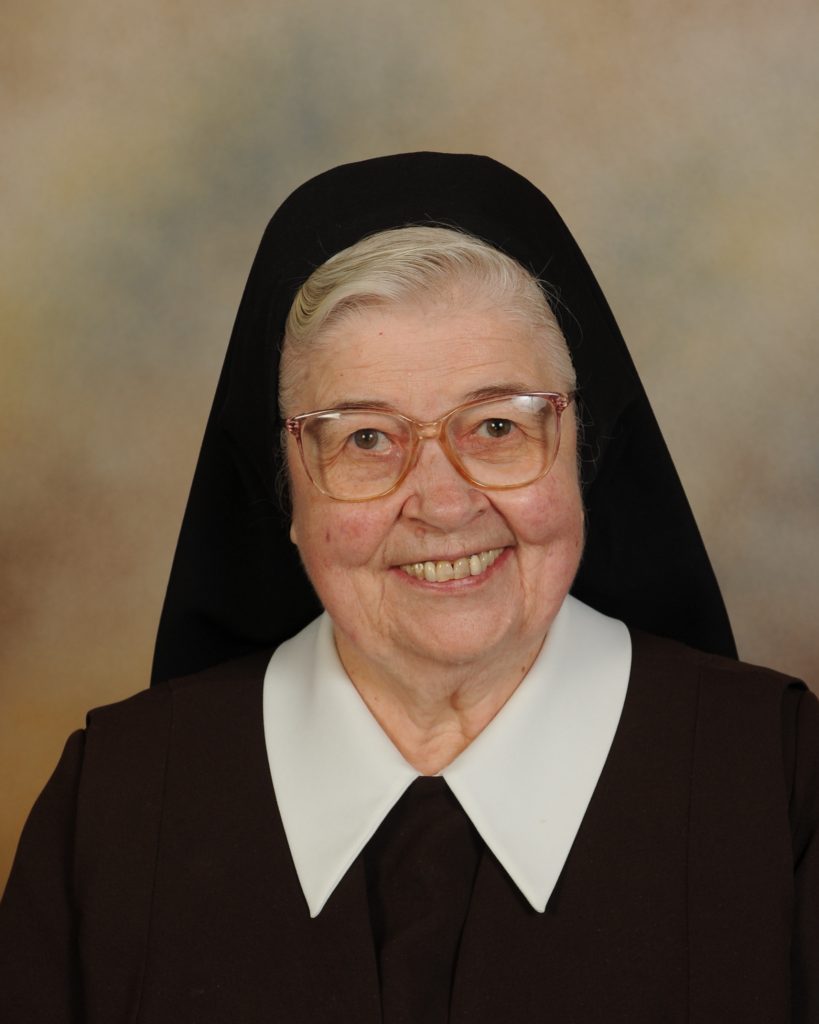 The eucharistic funeral liturgy for Sister M. Rose Agnes will be on Friday, Feb. 1 at 10 a.m. Bishop Kevin C. Rhoades will be the celebrant. Burial will follow in the convent cemetery.

Ruth was the second oldest of seven children born to George and Clara (Wilding) Pfautsch in Berger, Missouri, on May 14, 1933. She was preceded in death by her parents, her sister Dorothy and her brother Johnny. She is survived by three brothers, Gene, George and Robert, and her sister Marilyn.

Sister M. Rose Agnes received a Bachelor of Science degree in elementary education from St. Francis College and a Master of Science degree in education from DePaul University. She completed post-graduate work at St. John College in Cleveland, Ohio, the College of St. Thomas in St. Paul, Minnesota, Viterbo College in LaCrosse, Wisconsin, the University of Notre Dame and Indiana University. She served in the elementary schools of the province for 16 years, 10 years as a teacher and six as principal in Huntington, Indiana, and in Southfield, Michigan. She served as director of education for the province for 12 years.

Sister M. Rose Agnes served in some form of leadership for 56 years, from 1963 until the time of her death. She was a local superior for 14 years, college treasurer, provincial treasurer, formation director for the Junior Sisters, a member of the Provincial Council for 18 years, provincial superior from 1986-98 and a member of the General Council of the Congregation from 2004-15, serving as general treasurer for six of these years. She was invaluable to the congregation in many ways, with her knowledge of German. She also served on numerous boards and committees.

Sister M. Rose Agnes served on the board of trustees of the University of Saint Francis for 27 years. During her years as provincial she served as the chairman of the board. She was a member of the board of trustees of Franciscan Alliance (formerly Sisters of St. Francis Health Services) from 1974 until the present. Since the beginning of the Franciscan Leadership Enhancement Program, Sister M. Rose Agnes provided a session to each group on the foundress of the Sisters of St. Francis of Perpetual Adoration, Blessed Mother Maria Theresia Bonzel. And as she did everything, she did it with much joy and enthusiasm.

One of the questions on her application for entrance to the convent in 1949 was, “Are you willing to subject yourself to any kind of work?” At the time she marked ‘yes’, although no doubt she had no idea what was in store for her. However, the daily witness she provided to her sisters was evidence of the fact that no task was unimportant or beneath her. She worked in the convent library, the archives, cleaning in the serving room after meals and in so many ways. She was very faithful to her hours of eucharistic adoration and took care of the daily adoration schedule. Her knowledge of canon law and her knowledge of the order’s history was an invaluable resource. She was highly organized and could produce anything requested, either from one of her beloved binders or a flash drive. She was quite adept on the computer.

She gave many presentations over the years and she did so with enthusiasm. Her joy seemed to come from serving and trusting in Divine Providence. She never stopped serving the community and she never stopped being excited about the community, whether the past, the present or the future. She was an avid “pray-er” for vocations. She kept an ongoing list of young ladies that she knew were discerning religious life and prayed for them daily.

There is a saying that one should not allow themselves to be “burnt out” but to be “burnt up,” like a candle. As much as she did, she never became burnt out or gave up. The sisters learned so much from her and now she passes the torch on to each one of them.

Her pastor in Hermann, Missouri, Father Roger Niemeyer OFM, wrote in his letter of recommendation many years ago: “I heartily recommend Miss Ruth Pfautsch to you. With her great love for the Eucharist, her sincere piety and a love for virtue, she has ever been a model to her many friends. Yes, we all consider her a very lovable character. Her sincerity in her endeavor to follow Christ in the narrower and steep climbing paths of virtue I do not question.”

Sister M. Rose Agnes loved life: She was grateful for her faith, her family and her congregation. She was a tireless promotor of the life and charism of Blessed Mother Maria Theresia Bonzel. She enjoyed playing euchre and regularly putting out candy for the sisters. She loved to read and to engage in conversations on subjects both serious and lighthearted. She endeared herself to sisters of all ages.

On her application to enter the convent, Sister M. Rose Agnes wrote: “I wish to become a religious with the intention of better attaining my final end, of loving God more entirely, of serving God more devotedly, and thus striving more earnestly to secure the eternal happiness of heaven. I wish to enter this religious community to dedicate my life to the service of God.” And indeed, she did.