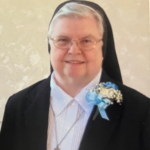 Sister Lois Ann Cline, OSF, was born in Shelby, Ohio. She professed her first vows in 1955 as a Franciscan Sister of the Sacred Heart whose Motherhouse is in Frankfort, Illinois. The first part of Sister Lois’ professional life was spent in the field of education for nearly 24 years. In the Diocese of Fort Wayne-South Bend, she ministered as a teacher and vice-principal at St. Charles School from 1974-1978. Following that, she served in various positions: Director of Religious Education, Congregation Leadership and Temporal Affairs Assistant, Coordinator of Portiuncula Center for Prayer in Frankfort, Illinois and local community hospitality/homemaker. In retirement, Sister Lois continues to share her gifts and the wisdom of her many contemplative experiences. 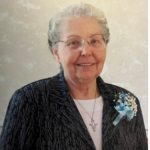 Sister M. Alexine Knotek, OSF, was born in Fremont. Her home parish was St. Anthony of Padua Catholic Church in Angola. She professed her first vows in 1955 as a Franciscan Sister of the Sacred Heart. For nearly 40 years, Sister Alexine ministered in health care as a registered clinical nurse specialist in the field of mental health and as an administrator. In the Diocese of Fort Wayne-South Bend, she served as Administrator of Ascension Living Sacred Heart Village, Avilla, from 1986-1991. During her tenure there, one of her major accomplishments was the addition of the Alzheimer’s Unit, St. Francis Hall. In addition to the above, she held various other positions: Congregation Archivist, General Secretary and Novice Minister. In semi-retirement, Sister Alexine continues to serve as the Motherhouse sacristan, to assist with various needs at the Motherhouse, and to work for a greater awareness and diminishment of human trafficking. 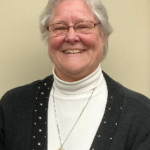 Sister Mary Elizabeth Imler, OSF, was born in Fort Wayne. She professed her first vows in 1985 as a Franciscan Sister of the Sacred Heart. She taught at Saint Joseph High School in South Bend and at Bishop Luers High School in Fort Wayne from 1985-1990. Sister Mary was involved in Adult and Ongoing Formation Ministry and was the congregation’s Candidate and Novice Directress for four years. During the next five years, Sister Mary was Co-Director of the Portiuncula Center for Prayer in Frankfort, Illinois. She was then called to serve as the General Superior of the Congregation for two terms. Presently, Sister Mary is enjoying serving as Vice President for Mission Integration at the University of St. Francis in Joliet, Illinois. With her Franciscan academic background and love of all things good and beautiful, she is privileged to lead pilgrimages to Assisi and always seeks to instill a love of God through the Gospel spirit and values.