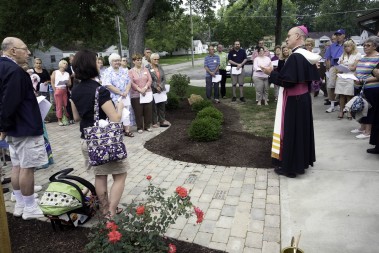 Bishop Kevin C. Rhoades speaks during the blessing of the The Franciscan Center building at 1015 East Maple Grove Ave. in Fort Wayne on Sept. 2. Named in honor of one of the cofounders, Jean Kelly, the new structure was remodeled to fit the various needs of The Franciscan Center. The center provides sack lunches that are delivered to 1,100 people on Saturday mornings. The ministry also provides a food pantry and Medicine Cabinet and serves 1,400 to 1,700 people every week.

“The Father of mercies and God of all consolation, who strengthens through His Son in the Holy Spirit, bestows His love and blessing in a particular way on those who are in need, and on those who minister to them,” Bishop Rhoades prayed, at the center on Sept. 2.

“Today, we ask for God’s blessing on this new home of The Franciscan Center, which is celebrating 25 years of service to the local community,” Bishop Rhoades continued. “It is a place where you will continue to help feed the hungry, aid the poor and needy and tend to the sick. By this great work, you will further the mission of Jesus Christ, and bring His people closer to Him.”

An open house with tours of the operations building and refreshments followed the blessing ceremony.

“Derived from the Secular Franciscan Order, The Franciscan Center was founded in 1989 by Kelly and Sally Ley,” said Tony Ley, executive director. “The genesis of its beginnings was a single homeless woman living in Johnny Appleseed Park in need of food,” he continued. “Sally started by helping her with food, then shelter.”

By preparing a few small lunches out of her own home kitchen and delivering them to the homeless population in Fort Wayne, Sally soon had Kelly’s assistance along with Paul Savage. “This simple mission grew from there,” added the executive director, who with his mother also was involved with the center from its beginning. “They later opened two homeless shelters, one for men and one for women,” he added.

After a few years, it was decided the shelters should be turned over to Vincent House, now Vincent Village, a transitional shelter with affordable housing for homeless families in Fort Wayne, he explained. The mission’s focus to the poor would be on providing food and other basic essentials. After several years of operating a sack-lunch program out of St. Peter’s Catholic Church, the operations were moved to the former school building of Sacred Heart Parish at 4643 Gaywood Dr. 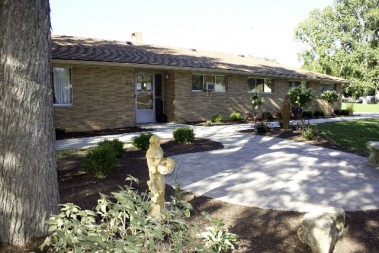 The exterior of The Franciscan Center is shown above. Bishop Kevin C. Rhoades blessed the center on Sept. 2.

“By 2011, a mission that began with a single sandwich, had evolved into an organization with a support staff of five employees and over 60 volunteers, providing its services over 80,000 times a year to many repeat clients,” said Tony Ley, who was named executive director in 2011.

Even though the use of the Sacred Heart School building was a definite blessing, Ley continued, it had disadvantages, mostly due to its lack of accessibility. “Because of the building’s design, reaching any of our services required trekking up and down a long flight of stairs,” said Ley.

An adjacent building, which had served as Sacred Heart’s convent until 1975, was purchased in April 2013 from The Church, a local ministry operating out of the facility. The structure subsequently was remodeled to fit the various needs of The Franciscan Center to include a room addition.

“This acquisition has allowed us to provide all of our services on the ground floor making us accessible to those with mobility issues. As an added bonus, this new building at its payoff will account for $20,000 in annual savings,” Ley explained. “Because of her silent strength and her devotion to the poor, we honored the late Jean Kelly by naming this new building after her,” he concluded.

The Franciscan Center volunteers deliver 1,100 sack lunches every Saturday morning beginning at 8 a.m. The ministry also provides a Food Pantry on Tuesdays and Thursdays from 9-11 a.m. and offers a Medicine Cabinet on Tuesdays from 10-11 a.m. The center serves approximately 1,400 to 1,700 people every week.