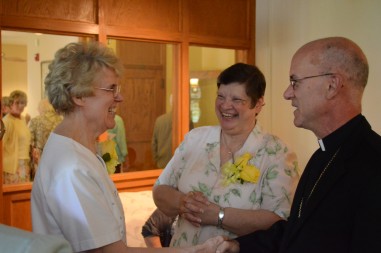 During the summer and sometimes on other occasions during the year, I enjoy visiting the Sisters and celebrating Mass at the motherhouses of the women’s religious congregations in our diocese. At every visit, I am reminded, in the words of Blessed John Paul II, that “the consecrated life is at the very heart of the Church.” I am particularly moved and inspired when I speak to the elderly and retired Sisters who have given their lives in service of Christ and the Church, faith-filled women who continue to serve the Church through their lives of prayer and their example of faithful love.

It is pretty amazing that, in a diocese our size, we have four motherhouses of religious sisters. This is truly a blessing! Each community has its own special charism and spirit. Each community has helped to build the Church in our diocese and beyond.

The four women’s religious congregations with headquarters (motherhouses) in our diocese (in historical order according to their establishment here) are as follows:

Sisters of the Holy Cross

The Sisters of the Holy Cross are an international community with approximately 450 Sisters serving in eight countries (Ghana, Uganda, Bangladesh, India, Mexico, the United States, Brazil, and Peru). Their motherhouse is located next to Saint Mary’s College, Notre Dame. I look forward to Mass and a visit with the Sisters at the Church of Our Lady of Loretto on August 7th.

On July 7th, I was happy to celebrate Mass in the beautiful chapel at Ancilla Domini, the motherhouse of the Poor Handmaids of Jesus Christ in Donaldson, for the installation of the congregation’s new leadership team.

Through the past 145 years, the Poor Handmaids of Jesus Christ have served in our diocese in the areas of health care, Catholic education, orphan care, and parish ministries. They opened Saint Joseph Hospital in Fort Wayne in 1869.

There are many ministries of the Poor Handmaids at Donaldson, including the Catherine Kasper Home and the Lindenwood Retreat and Conference Center.

Following the example of Bishop D’Arcy, my home when I am in the South Bend area of the diocese is at the motherhouse of the Sisters of Saint Francis in Mishawaka. I am deeply grateful for the Sisters’ hospitality and generosity.

Like the Poor Handmaids of Jesus Christ, the Sisters of Saint Francis of Perpetual Adoration began in Germany. Their foundress, Mother Maria Theresia Bonzel, will be beatified this coming November. I hope to travel to Paderborn, Germany for the beatification Mass. Mother Maria Theresia founded the Congregation in Olpe, Germany in 1863 so this year marks the 150th anniversary of the Sisters of Saint Francis.

It was the second Bishop of Fort Wayne, Joseph Dwenger, who welcomed the first Sisters of Saint Francis to our diocese. In 1875, Mother Maria Theresia accompanied the first six missionary Sisters who settled in Lafayette, then part of the Diocese of Fort Wayne. The U.S. Province of the Sisters of Saint Francis of Perpetual Adoration was formed in 1886, with its motherhouse located in Lafayette. It moved to Mishawaka in 1943.

The Sisters of Saint Francis have been extensively involved in health care, education, and other ministries in our diocese and beyond. They sponsor the University of Saint Francis which moved from Lafayette to Fort Wayne in 1944. They founded, and continue to sponsor, the Franciscan Alliance, a Catholic health care system with 13 hospitals and many medical practices.

I look forward to celebrating the Mass of Religious Profession at the motherhouse chapel on August 11th, during which two Sisters will make their perpetual vows.

The motherhouse has Perpetual Adoration of the Blessed Sacrament in which each Sister makes a daily Holy Hour. During the day, many faithful of the area stop by to pray before the exposed Blessed Sacrament, a great blessing for so many in the South Bend area of our diocese.

Our Lady of Victory Missionary Sisters

Last Friday, I celebrated Mass and visited with the Our Lady of Victory Missionary Sisters at Victory Noll, the motherhouse in Huntington. Each year I visit and celebrate Mass there in late July, near the anniversary of the death of Archbishop John Noll who was such a beloved friend and benefactor of the Victory Noll Sisters. In fact, he is buried in the Victory Noll cemetery.

Unlike the other religious congregations mentioned above, the Victory Noll Sisters were founded here in the United States. They were founded in 1922 by a Chicago priest, Father John Joseph Sigstein. A few years later, thanks to the efforts of Bishop Noll, the Sisters (then called the “Missionary Catechists of Our Blessed Lady of Victory”) settled in Huntington, where the motherhouse at Victory Noll was established.

The Victory Noll Sisters grew in numbers through the years and served as missionary catechists, providing religious education especially in the west and southwest United States. They have also served at several places in our diocese throughout the years.

Victory Noll is also an oasis of prayer in our diocese. The beautiful Chapel of Our Lady of Victory, modeled after the missionary churches of the Southwest, has beautiful Spanish architecture like that of the motherhouse. The Archbishop Noll Memorial Chapel is a place for worship and prayer, connected to the Holy Family Building, the facility for elderly and ill Sisters.

Religious sisters in our diocese

Presently, there are approximately 450 women religious in our diocese, the great majority from the four congregations with motherhouses here. Let us continue to pray for an increase of religious vocations in our diocese, that many young women will be open to God’s call to the consecrated life!