More photos from this event can be found in the photo gallery. 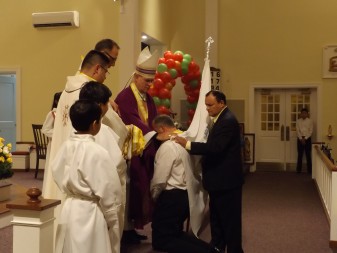 Bishop Kevin C. Rhoades places the Nocturnal Adoration Society medal on new member George Fattal at the installation Mass and ceremony held Saturday, Dec. 12 at St. John the Evangelist, Goshen. Treasurer of the National Nocturnal Adoration Society Eduardo Elizondo places the flag across the shoulders of each candidate. Looking on from left are Father Fernando Jimenez and Father Tony Steinacker.

GOSHEN — In an installation ceremony and Mass celebrated by Bishop Kevin C. Rhoades on Saturday, Dec. 12, the feast of Our Lady of Guadalupe, St. John the Evangelist Church in Goshen was established as an official chapter of the Nocturnal Adoration Society.

A number of Spanish-speaking parishioners have been committed to this devotion for approximately three years, staying with the Blessed Sacrament all through the night. They were joined by a handful of English-speaking men.

On Saturday evening approximately 50 members were officially inducted as nocturnalists and presented special medals and candles blessed by the bishop.

Members of the National Nocturnal Adoration Society, President Raul Mendoza and Treasurer Eduardo Elizondo from Laredo, Texas, were present for the installation Mass and earlier in the afternoon explained more about the society.

The Office of the Most Blessed Sacrament is similar to the Liturgy of Hours with some adaptations in keeping with the Second Vatican Council’s Constitution of the Sacred Liturgy.

“Now it’s truly a bilingual movement,” Elizondo said. “And with the bilingual book we hope it continues.”

There are 500 parishes with chapters in the United States and 161 of them have been established since 1986. St. John the Evangelist is the first chapter in the state of Indiana.

Once a month, nocturnal adorers stay all night at the church. The night usually begins with a prayer service around 9 p.m. and Exposition of the Blessed Sacrament. Two people are assigned for every hour to stay with the Sacrament, but the rest of the members remain on the premises throughout the night. According to Elizondo, women are not supposed to stay all night. They should attend the first two to three hours and return in the morning prior to the closing Mass. He said this is for the safety of the women and to avoid any potential scandal.

“We consider ourselves soldiers of God,” he said. “We intervene and pray to mitigate and ask for forgiveness on behalf of mankind and our role is to defend the Mother Church against any spiritual attacks.”

Requirements to establish a local chapter

Elizondo said a minimum of 15 men, who are committed to remain constant participants in Nocturnal Adoration, is required to establish a chapter and there are rules that must be followed by the nocturnalists, most of which are to remain committed, prompt and avoid anything that could bring disgrace to the society.

Raul Mendoza spoke to the candidates prior to the evening Mass. He told them how special it was that it is happening on the feast of Our Lady of Guadalupe. “It was the Holy Spirit that chose the date,” he said. He told the candidates that they were patient and had worked hard to get more people involved.

Several children were also being inducted as members. Mendoza said when people ask him why they allow children when the children don’t really understand what they’re doing he replies that parents know what they want for their children and the children will someday understand.

Loren Hartman one of the English-speaking candidates spoke about why he was joining. “To pray the Office (of the Blessed Sacrament) was beautiful and powerful,” he said. “Adoration of the Blessed Sacrament has changed my life and changed Joanne’s (Hartman’s wife) life profoundly. And He has spoken to me in Adoration.”

Rosa Hernandez, one of the bilingual women candidates said participating in Nocturnal Adoration was an act of thanksgiving. “I want to give my time to Jesus and the Sacrament for all the blessings in my life,” she said.

During the installation, Bishop Rhoades asked each candidate about their commitment and why they wanted to join. They each responded that their intent in becoming members was to make Jesus in the Eucharist the center of their lives, to participate frequently in the celebration of the Mass, to be loyal to their monthly hour of Adoration and proclaim and extend Christ’s love in the witness of their daily lives.

As the bishop blessed the medals to be given to the members he prayed that “whoever wears the medal and humbly strives to serve and honor Your Son through Nocturnal Adoration may by His merits and intercession be granted Your abundant grace in this life and share His glory in the eternal kingdom.”

Medals were first given to Bishop Rhoades, Father Fernando Jimenez, parochial vicar, and Father Tony Steinacker, pastor, who was given the authority to accept members or delegate that authority to any priest of his choice.

The Nocturnal Adoration Society flag was placed across the shoulders of each candidate as they approached the altar to receive his or her medal. The medals were symbols of sacramental love and were to serve as shields against the snares of any malignant spirit. Each candidate was also given a candle. The flag given to St. John Church by the national society was blessed and waved by Bishop Rhoades, then Father Jimenez and St. John’s chapter president Gilberto Loesa as the congregation cheered “Viva!” amidst applauds.

Afterwards the officials of the new chapter spoke of what it meant to them. Father Jimenez said, “It’s a dream come true. Some didn’t think it would happen. It’s a special occasion for all of us to celebrate this feast and to celebrate in the presence of the bishop is very special.”

Father Steinacker said everything was connected. “The fact that St. John the Evangelist — the beloved disciple — calls every one of us to be that beloved disciple in all ways and the fact that this (the establishment of the chapter) is happening on this day proves that nothing happens by coincidence. We chose to have this society under the patronage of Juan Diego and how beautiful that everything is culminating on Our Lady of Guadalupe’s feast day and Gaudete (joyful) Sunday. It is indeed a joyful day for each member, for our parish and the diocese.”

St. John’s Nocturnal Adoration Society President Gilberto Loesa said, “I’m very happy. Thanks to God and to all the brothers and sisters who prepared for this day and thanks to Father Tony, Father Fernando and the bishop for all their hard work.”

As Bishop Rhoades posed for photos with new members of the society he said of the event, “It’s a blessing for the parish and the whole diocese. It’s such a beautiful devotion and to see so many in our Latino community involved and making the commitment to spend time in Adoration during the night.”