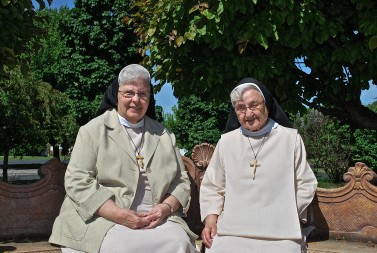 SOUTH BEND — On Aug. 23, 1954 the first teaching Felician Sisters for Holy Family School arrived in South Bend from their motherhouse in Livonia, Mich. Nearly 60 years later, the two remaining Felician Sisters assigned to the school for the past two decades, Sister Joan Marie Shillinger and Sister Mary Annelle Krych, are retiring and returning to the convent in Livonia.

The first group of Felician Sisters, who are officially known as the Congregation of Sisters of St. Felix of Cantalice Third Order Regular of St. Francis of Assisi (CSSF), came to St. Adalbert School in South Bend in September of 1911.

According to the Felician Sisters archives in Livonia, the sisters took charge of over 500 children at St. Adalbert. By 1926, the registration at the school totaled 1,056 pupils in grades 1-8 taught by 16 sisters and two secular teachers.

From 1944 to 1954 the Felician Sisters of St. Adalbert School conducted religion classes for the children of Holy Family Parish in South Bend. When Sister M. Adonia, superior, Sister M. Marietta, Sister M. Firmina, Sister M. Bernice and Sister M. Francesca officially began teaching at the new Holy Family School on Sept. 8, 1954, there was an enrollment of over 200 students. 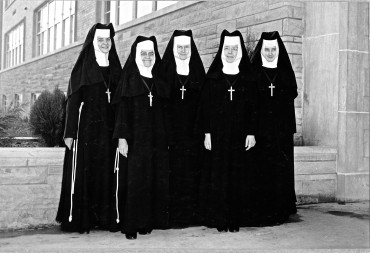 Sister Joan’s journey began in seventh grade at St. John Vianney School in Wyoming, Mich. Sister Caesaria was the principal and a teacher at the school. Sister Caesaria did not drive and Joan asked her mother if she could drive Sister to different locations around town. During this period Joan became close to Sister Caesaria and the sister convinced Joan to go to the Felician Academy in Detroit, which was designed for those aspiring to the vocation of becoming a nun.

Although initially reluctant to go to the academy, Joan completed her education there and entered the adjoining convent in June of 1958. After completing her final vows at the convent, Sister Joan was assigned to St. Damian School in Westland, Mich., as a second-grade teacher with 58 students. After teaching for a number of years, Sister Joan went into school administration and has been a principal at Holy Family School for the past 21 years.

Coming from a large family of eight children, Sister Annelle describes her youth as “being a tomboy.” With two brothers dying in infancy, and a third brother at age 14, Sister Annelle’s mother, who was pregnant with her older sister Mary, “promised the Lord to give the child to the convent,” Sister Annelle recalls.

Her sister Mary did indeed become a nun, and because Sister Annelle loved her sister and the other nuns, she entered the convent in 1940. Six years later after taking her final vows, Sister Annelle became a first-grade teacher.

One of the things Sister Annelle has enjoyed teaching is showing sounds of words through “blowing” consonants, blends and diagraphs. She believes this method is very helpful in teaching children to read.

Over the years, there have been several memorable events at Holy Family School. During construction of Holy Family’s new church building in the late 1990s, the students of the school took up a challenge to raise money for church bells. Money collected from the students each morning went into a large gallon water bottle that was stored in the back of the principal’s office. By December of 1998, approximately $3,000 had been collected.

On Dec. 3, 1998, while Sister Joan was at a meeting and the school secretary had momentarily gone across the hall to the kindergarten room, the water bottle, along with its contents, was stolen. After a local media outlet reported the theft, money flowed in from donors eager to replace the stolen funds. Eventually over $10,000 was raised for bells, which can still be heard today at the church.

Sister Annelle’s big moment came during her 50th anniversary of becoming a Felician Sister. While the students surprised Sister Annelle with a pizza party, another surprise was awaiting outside of the school building. At a dedication ceremony attended by students, staff and local South Bend leaders, a street sign named Sister Annelle Drive was unveiled. “Of course I cried,” says Sister Annelle.

The most difficult part of the sisters’ retirement will be missing the students. Sister Joan recalls that one student who claimed he could not wait to graduate from Holy Family School as an eighth grader and moved to Ohio, recently returned as a high school senior to tell the sister how much he missed them and the school.

With the departure of Sister Joan and Sister Annelle, only two Felician Sisters remain in the South Bend area. Sister Mary Anthony Kubat is a pastoral minister at St. Adalbert Parish, and Sister Catherine Ryzewicz is an administrative assistant at St. Adalbert School.