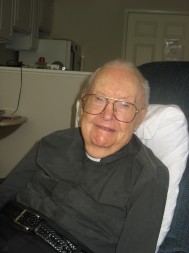 Father Robert Traub, shown at his home at Saint Anne Home and Retirement Community in Fort Wayne, will celebrate his 100th birthday on Friday, Aug. 23, at the 12:05 p.m. Mass at the Cathedral of the Immaculate Conception in Fort Wayne.

Born in Muncie to Adam and Anna Traub, he is the oldest of nine, with five brothers and three sisters. And it appears longevity runs in the family. Two brothers have died but the rest are living. His father and mother lived to be 82 and 86, respectively.

Young Robert attended St. Lawrence School, Muncie, and Columbia College, Dubuque, Iowa. He enrolled at St. Meinrad Seminary, St. Meinrad, and was ordained to the Priesthood on June 3, 1939, by Bishop John F. Noll in the Cathedral of Immaculate Conception, Fort Wayne. Among his 12 classmates was Msgr. William J. Voors, deceased, former chancellor and head of the Marriage Tribunal of the diocese.

Asked when he was first aware of a vocation to the Priesthood, Father Traub said, “In grade school I practically lived in the church. I was there serving Mass more often than I should have probably, and I was there winter and summer. And sometimes we lived pretty far from the church.”

After his ordination, he obtained a teaching degree from the University of Notre Dame, and initially was appointed as an assistant at St. Joan of Arc Church, Kokomo, in September of 1940 with residence at St. Joseph Memorial Hospital. In July of 1943, he was named to the teaching staff of Catholic Central High School, Hammond, where he enjoyed teaching a variety of courses including Latin, religion, civics, economics and American history, which was his major subject.

Father Traub retired on Sept. 11, 1978, and was in residence at St. Jude Church, Fort Wayne, for nearly 20 years. He assumed the duties of temporary administrator there in 1988 for about three weeks. Currently, Father Traub lives at Saint Anne Home and Retirement Community, 1900 Randallia Dr., Fort Wayne, IN 46805, Room 1020, should anyone care to drop him a note or greeting card.

It seems appropriate to ask someone who has reached 100 years of age what the secret is to a long life. Father Traub said, in his case, “It was exercise, parking the car a ways away and purposely choosing to walk to my destination. And I used to often walk throughout Glenbrook Shopping Mall (Fort Wayne),” he said. Father Traub also controlled his diet by watching what and where he ate even though he dined out most of the time. “I’ll never cook,” he quipped.

The biggest change he’s seen in his lifetime is “going from the farm to the city and the city now being transformed by the electronic age. You used to have to write a letter or message and put it on horseback. Then they tried putting things on poles with the telegraph. Now it’s instantaneous around the world and not just locally,” he mused.

“The biggest change in the Church would be Vatican II,” he said. Trained in Latin, he was “glad to get away from it — all the learning and memorizing — although I taught it for one year in high school.”

Asked what he enjoyed most about his Priesthood, he said, “Taking care of the sick, I suppose, and helping people in general.”

Father Traub tries to attend Mass daily at Saint Anne’s chapel and occasionally celebrates Mass by himself since he has some difficulty both seeing and hearing. His favorite saint is a namesake, Robert Southwell (c. 1561–1595), an English Roman Catholic priest of the Jesuit Order.

Of the future Father Traub said, “Let’s just hope that the people who left the Church will return. And that the Church will have a better image among non-Catholic people of the world, especially the Muslim nations.”

Bishop Kevin C. Rhoades will celebrate a special Mass on Aug. 23, at 12:05 p.m. with other priests of the diocese in the Cathedral of the Immaculate Conception, Fort Wayne, to honor Father Traub’s 100th birthday. Following the Mass, the priests will gather at the nearby Archbishop Noll Center for a luncheon to celebrate the birthday of the eldest priest of the diocese.