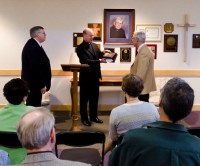 The Wheelchair Ramp Builders group of Fort Wayne were the recipients of the Father Tom O’Connor Light of Christ Award, which was presented at St. Mary Church on Thursday, March 17, by Bishop Kevin C. Rhoades. With Bishop Rhoades and representing the ramp builders are Steve Weissner, left, and David Kelley, crew chief, right.

FORT WAYNE — The Father Tom O’Connor Light of Christ Award committee honored the volunteers of the Wheelchair Ramp Builders group at a ceremony at St. Mary Church in Fort Wayne on March 17 hosted by Father Phillip A. Widmann, pastor, and Parishioner Andrea Thomas. The award, in the category of diversity and inclusiveness, was presented by Bishop Kevin C. Rhoades.

Created in 2006 by St. Mary Church in cooperation with the Diocese of Fort Wayne-South Bend, the award honors individuals whose faith and activities exemplify the type of servant leadership for which Father Tom O’Connor was known during his years as a priest in Fort Wayne. Nominations are open to persons of all faiths.

While diversity and inclusiveness often are thought of in terms of racial or ethnic issues, physical disability is another kind of diversity. The Wheelchair Ramp Builders have volunteered their time and talent for more than 21 years to build up-to-code residential access ramps, which allow individuals with differing physical abilities to leave their homes and be included in the broader fabric of society.

The group was nominated by Nancy Lourraine, executive director of Turnstone Center for Children and Adults with Disabilities. In her nomination letter, Lourraine noted that the group has, since its inception in 1992, built more than 1,000 ramps and that 87 percent of those ramps have been for individuals who live at or below the federal poverty level.

The 24 volunteers themselves are diverse on several levels. Many are Presbyterian — the first ramp was built after a call went out during a citywide gathering of representatives from local Presbyterian congregations — but they soon became spiritually diverse, with volunteers coming from many different faith families, including Catholic and Lutheran. Their paying jobs also run the gamut from active and retired teachers and engineers to service and construction workers, and include an attorney and a Presbyterian pastor. On weekends, in all types of weather, the group builds wheelchair ramps that help to restore independence and self-sufficiency to individuals.

Crew Chief David Kelley and Steve Weissner, a ramp builder, accepted the award on behalf of the group. The Father Tom O’Connor Light of Christ Award carries with it a cash gift of $1,000 given to the charity, project or program of the winner’s choice. The check this year was awarded to the Turnstone Center Residential Ramp Building Program to purchase building materials.

Previous Father Tom Award winners include Cliff Kindy, 2007, for his work in peace and justice; Sister Janet Gildea, M.D., 2008, for her dedication to cultural diversity; William Critell, 2009, for his efforts in education among disadvantaged students; and University of Saint Francis student Danielle Theresa Collins, 2010, for her campus and community leadership, and volunteer work to promote justice for the disadvantaged.

Father Tom, who died on March 17, 2004, at the age of 74, served as pastor of St. Mary Parish for 34 years. Many consider the humble priest to be a model of Catholic faith in action in both justice and charity. He was instrumental in the creation of the St. Mary Soup Kitchen, which has operated nonstop since opening on Jan. 22, 1975, and serves nearly 1,500 bowls of soup to hungry people every day. He also is credited for beginning the Matthew 25 Health and Dental Clinic, St. Mary’s Thanksgiving Day dinner for the hungry and the annual Christmas box distribution which assists more than 500 families yearly.

Because Father Tom always said his work was rooted in his Catholic faith, in the Scriptures and in his priestly vocation, local “Light of Christ” Award nominees also must be firmly rooted in their own faith tradition.