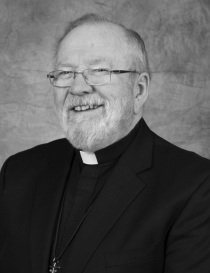 In his 50 years as a priest, Father Thomas Jones, CSC, has only been assigned to a position outside the Diocese of Fort Wayne-South Bend for one year, except for sabbatical interludes in Jerusalem and Rome. He served as parochial vicar at St. Ignatius Martyr in Austin, Texas, in the fall of 2017, and as administrator of Holy Redeemer in Portland, Oregon, in spring 2018.

In Washington, D.C., his family lived over a restaurant a few blocks from St. Patrick Parish, where his mother often brought him to pray novenas. Few families lived downtown, so he was the only altar boy. The Congregation of Holy Cross had a seminary in Washington, D.C. at the time, and the seminarians befriended the boy, sharing hobbies like photography and pet care. At Calvert, the St. Matthew Cathedral school, the nuns who taught him in seventh and eighth grade encouraged his interest in becoming a priest. The Archdiocese of Washington, D.C. didn’t have a minor seminary, so Monsignor Philip Hannan, later Archbishop of New Orleans, wrote a letter of recommendation for young Tom and he was accepted into the high school seminary on the University of Notre Dame campus, arriving in the fall of 1959.

Although most of his classmates didn’t become priests, some are still good friends. It was an excellent education and his first experience with organized sports. After high school came his novitiate year, during which he devoured the first document from Vatican II, The Constitution on the Sacred Liturgy.  Then he earned undergraduate and Master of Divinity degrees at Notre Dame. As a deacon at St. Pius X in Granger, he helped with religious education and marriage prep.

“I’ve never looked back,” says Father Jones. “It was a good fit.”

He then went into parish work. “I enjoy working with people,” he said. After six years as Parochial Vicar at St. Joseph Parish, South Bend, where he also directed the choir, he began working for the diocese as Director of what is now known as the Office of Worship. During those six years, he produced a newsletter, formed RCIA teams and visited every parish in the diocese, training lectors and extraordinary ministers of holy Communion. “I was impressed with how hard people worked at learning to perform these ministries well,” he said.

Eager to settle down in a parish, Father Jones became pastor of the rapidly-growing St. Pius X from 1984-1995. He spearheaded the building of a new church, which has since been incorporated into an even larger building. During that time, Father Jones also took courses to nurture his growing interest in Scripture.

His next assignment, Christ the King in South Bend, again involved a building project to expand the school and make the whole parish grounds more accessible. After that, he took a sabbatical year, spending time at the Pontifical North American College in Rome. Once he was back in South Bend, he often helped out at St. Monica Parish in Mishawaka. From 2008 to 2017, he pastored Sacred Heart Parish at Notre Dame.

Father Jones’ current assignment is as religious superior at Holy Cross House, a residence for priests and brothers of the congregation in the final years of their life. This is the first time he’s dealt directly with dementia, but Holy Cross House has chosen to intersperse all their residents rather than have a separate wing for those with memory issues.

With the able assistance of medical personnel, a full-time physical therapist and activities director, Father Jones tries to make sure all the residents are safe, healthy, worry-free and able to enjoy the best quality of life as they prepare for their transition home. “From them, I’m trying to learn to age gracefully,” Father Jones said. He also encourages seminarians and younger priests to interact with their older colleagues.

He has enjoyed every assignment he’s had and wouldn’t change anything, except maybe a few thoughtless words. “All you have to do is find what you’re called to do, and you’ll be happy.”