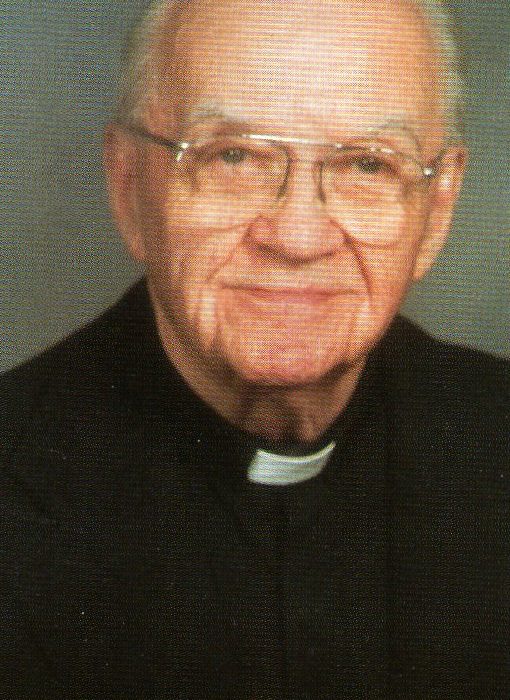 FORT WAYNE — Father Thomas E. Doriot, a priest of the Diocese of Fort Wayne-South Bend, died July 27 in Sacramento, Calif. He was 89.

Born in Fort Wayne on March 21, 1924, to Jule and Margaret, Father Doriot attended St. Patrick School, Fort Wayne. He was part of the charter class of Central Catholic High School, Fort Wayne, and graduated in 1942. He attended St. Lawrence Seminary in St. Calvary, Wis., and St. Meinrad Seminary in St. Meinrad. He was ordained June 11, 1949 at the Cathedral of the Immaculate Conception by Bishop John F. Noll, the same cathedral in which his parents were married.

He was appointed pastor of St. Mary of the Assumption in South Bend in 1966, and later served as pastor of St. Michael in Plymouth and St. Patrick in Fort Wayne.

Father Doriot retired in 1986 and in 1989 moved to the Diocese of Sacramento to be near his only sibling, Providence Sister Thomas Jeanne Doriot. He assisted in parishes there in his retirement years.

Sister Doriot said her brother, 13 years her senior, was a people person. “He loved serving people,” she noted, adding that he had a great sense of humor. She recalled their close-knit family and said, “He was very devoted to our family, mom and dad and me, and to all families.” During his academic career the Sisters of Providence played an important role in his life, Sister Doriot said.

Sister Doriot also recalls his inspirational preaching, saying, “I remember he gave good homilies. And he inherited our dad’s good voice.” Jule Doriot was a choir member at St. Patrick and sang at other area events. And she said Father Doriot was devoted to the Edmonite Missions, but contended, “Mass really was the center of his life.”

Msgr. Bernard Galic, pastor of St. Aloysius Parish in Yoder, served with Father Doriot in Plymouth at St. Michael Church. Father Doriot, he recalled, “was a man who loved the Priesthood.” And, he said, he also loved to host priests on the weekends. “Father Doriot was quite a chef,” noted Msgr. Galic, who was a frequent guest at Father Doriot’s dinner table on Sunday.

Lifelong friend and tennis partner Jim Robinson who graduated high school with Father Doriot agreed saying, “He was a real good priest.” Over the years, as Father Doriot entered seminary and Robinson joined the Navy and during the years of service that followed, the two men remained fast friends. Robinson recalled that even when they lived far from each other they called or visited when they could. “It was a real good friendship,” he said.

Following retirement in 1986, Father Doriot moved to the west coast four years later where his sister found an apartment for him across the street from her own. During his retirement years there, Father Doriot was a “supply priest,” who “helped out at parishes and traveled anywhere they needed help,” said Sister Doriot.

For the past two years, as Father Doriot’s health diminished he moved to a care home where Sister Doriot spoke and prayed with him every night. The staff that cared for Father Doriot there “considered him a blessing,” said Sister Doriot.

A Funeral Mass for Father Doriot was held in Sacramento at Presentation of the Blessed Virgin Mary Church on Aug. 1.

Visitation in Fort Wayne was held at St. Patrick Church on Monday, Aug. 5, followed by a Mass of Christian Burial and burial at Catholic Cemetery in Fort Wayne.