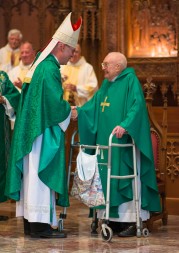 FORT WAYNE — Father Robert L. Traub, the oldest living diocesan priest, died at Saint Anne Home and Retirement Community where he had been in residence for the past 15 years on Saturday, Dec. 13. He was 101.

Robert Traub was born on Aug. 23, 1913, in Muncie, the oldest of the nine children of Adam and Ann Traub. He attended St. Lawrence School, Muncie, and graduated from Central High School in 1931. After graduation from Columbia Academy, Dubuque, Iowa, in 1935, Father Traub enrolled at St. Meinrad Seminary, St. Meinrad. He was ordained to the Priesthood on June 3, 1939, by Bishop John F. Noll in the Cathedral of Immaculate Conception in Fort Wayne.

Following his ordination, Father Traub earned a teaching degree from the University Of Notre Dame, and initially was appointed as an assistant at St. Joan of Arc Church, Kokomo, in September of 1940 with residence at St. Joseph Memorial Hospital. In July of 1943, he was named to the teaching staff of Catholic Central High School, Hammond, where he taught Latin, religion, civics, economics and American history.

Father Traub retired on Sept. 11, 1978 and resided at St. Jude Church, Fort Wayne, for nearly 20 years. He assumed the duties of temporary administrator there in 1988 for about three weeks. For the past 15 years he had been residing at Saint Anne Home and Retirement Community.

In 2013, Father Traub celebrated his centennial birthday with a special Mass celebrated by Bishop Kevin C. Rhoades at the Cathedral of the Immaculate Conception. A year later he celebrated his 75th jubilee as priest.

Father Traub was known for his sense of humor and positive attitude. In a recent interview with Today’s Catholic, when asked to what he attributed his longevity, the centenarian said, “It was exercise, parking the car a ways away and purposely choosing to walk to my destination.” When asked what he enjoyed most about his Priesthood, he said, “Taking care of the sick, I suppose, and helping people in general.” Father Paul D. Miller now becomes the oldest diocesan priest at 98.

Father John Pfister, pastor of St. Mary Church in Huntington, has known Father Traub for about 45 years. Father Traub, in retirement, assisted with Masses and Confessions for eight years at St. Jude Parish when Father Pfister was pastor there. He also attended the emergencies that were called in from Parkview Hospital. Of his friend, Father Pfister said, “He had a heart of gold. He loved children. He was really a good person.” He related that Father Traub was a social man who enjoyed people. “He enjoyed playing cards and going to the Knights of Columbus fish fries. He also enjoyed traveling,” said Father Pfister, who delivered the homily at Father Traub’s funeral Mass upon his request.

Holy Cross Father Tom Jones, a priest from South Bend, recalled how inspired he was, as a young priest, by the energy of Father Traub and his dedication to the care of sick parishioners and their pastoral needs.

Msgr. William Schooler, pastor of St. Pius X in Granger knew Father Traub most of his 40 years of Priesthood and was grateful to have the retired priest at St. Jude when he was pastor there. “He took care of most of the hospital calls,” said Msgr. Schooler, adding, “He was a character. He kept things moving around in the house.”

Msgr. Robert Shulte, vicar general of the Diocese of Fort Wayne-South Bend, wrote of Father Traub, “Father Traub is remembered for his constant sense of humor and friendliness. He was generous on serving many parishes during his retirement.”