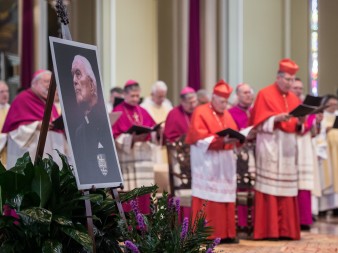 Prelates pray near a large portrait of Holy Cross Father Theodore Hesburgh, former president of the University of Notre Dame, during his funeral Mass March 4 at the Basilica of the Sacred Heart on the university’s campus. Father Hesburgh died Feb. 26 at age 97 in the Holy Cross House adjacent to Notre Dame.

NOTRE DAME — “For all the momentous events in which he played a role, and all the honors he received, Father Ted Hesburgh always said the most important day of his life was when he was ordained a priest.” Beginning with these words of admiration and praise, Holy Cross Father John I. Jenkins, president of the University of Notre Dame, united his voice with countless others from the Notre Dame family to express gratitude and support for the tremendous impact Father Hesburgh had on the Church and the world throughout his life.

Bishop John F. Noll of Fort Wayne ordained Father Hesburgh a priest with the Congregation of Holy Cross in 1943 at the Basilica of the Sacred Heart. On Wednesday, March 4, the 15th president of the University of Notre Dame was laid to rest after a funeral Mass held in the same basilica, celebrated by Holy Cross Father Thomas J. O’Hara, the provincial superior of the congregation, and Father Jenkins as homilist.

The evening prior, a wake service was held for family and close friends of Father Ted, presided by President Emeritus Holy Cross Father Edward Malloy. He shared that in their last conversation, “Father Ted had been thinking about eternity, and what kept coming to mind was the phrase ‘no eye has seen nor has ear hear what God has in store for those who love Him.’”

Father Malloy also touched upon his spiritual life, revealing, “Father Ted celebrated Mass almost every day during his 71 years as a priest, except for one or two times when it was almost impossible.

His role as a pastor was evidenced following the wake, as public visitation was available throughout the night until 10 a.m. Wednesday morning. During this time, over 12,000 visitors filed into the basilica to pay final respects to the man who had been most responsible for shaping the mission and legacy of the university throughout the 20th century.

Father John Jenkins remarked on just how far Father Hesburgh’s reach had extended. “The arc of Father Ted’s life extended through the Great Depression, World War II, the post-war years, the Civil Rights movement, the reforms of the Second Vatican Council, the Vietnam War and unrest of the 1960s, the Cold War and Watergate. He was shaped by them all and helped shape many.” 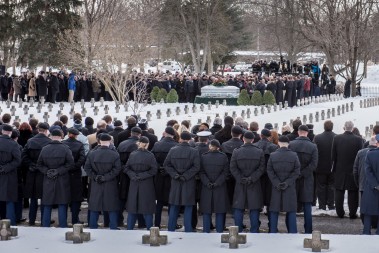 Mourners surround the casket of Holy Cross Father Theodore Hesburgh during his burial service March 4 at Holy Cross Community Cemetery on the campus of the University of Notre Dame.

He further emphasized that even with the influence and accolades Father Hesburgh accrued, his final desires were to be remembered in humility. He remarked, “as a religious who vowed poverty and obedience, Father Ted lived in a small, austere room, shared meals and common prayer with the Holy Cross community, and will be soon laid to rest under a simple cross, undistinguished from the graves of his Holy Cross brothers. Father Ted’s wish was that his funeral and burial would be as far as possible like other Holy Cross services.”

Following Mass, countless students lined the pathway from the basilica to the cemetery, watching the procession flow by as they stood in silent representation for the innumerable lives Father Hesburgh touched throughout his ministry as a priest and educator.

Holy Cross Father Paul Doyle, who cared for many of Father Hesburgh’s needs towards the end of his life, also shared three prayers Father Hesburgh relied on often when seeking guidance for upholding the mission of the university, specifically to continue working for justice, honoring Our Lady and invoking the presence of the Holy Spirit.

Father Hesburgh’s memory lives on in the hearts and minds of those who knew and were touched by him. He continues to be honored through a spiritual tribute at the Grotto of Our Lady of Lourdes on campus, where students have arranged candles to say simply, “TED.”

These events and memorials demonstrate a living witness of the final words from Father Malloy’s speech Tuesday evening. “Father Ted, you have been our pastor here at Notre Dame, as you have for the country and the world. Now, go to God, and may you rest in peace.”