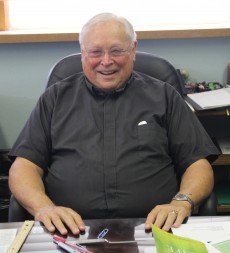 ANGOLA — When one asks Conventual Franciscan Father Fred Pasche what he likes best about St. Anthony of Padua Parish, he responds with a hearty, “Everything.”

The pastor of the Angola parish for 17 years and who is celebrating his 50th jubilee as a Conventual Franciscan priest this year, will be retiring as pastor and has been appointed to St. Joseph University Parish in Terre Haute as an associate for at least one year.

Father Pasche’s 17 years at St. Anthony Parish hold many fond memories. He saw the parish flourish under the Christ Renews His Parish.

He told Today’s Catholic the parish is “so completely different from when I came. The people have just been tremendous in the way they responded.”

“When I came here, I had no intention of building a church,” he said. “But that certainly went by the way. We built a church and paid for it in two years.”

“When we started the fund drive (five to six years ago) it started bringing the people together,” Father Pasche noted of the 700 families of the parish. “And during that time we went into Christ Renews His Parish. That really kept the people fired up.”

That spirit of the people remains strong and the parishioners are willing “to do whatever to keep things moving,” Father Pasche said.

The first meeting to discuss the possibility of building a new church attracted over 50 people. “It just took off from there,” Father Pasche noted.

Angola is the home to Trine University and the university’s Newman Fellowship meets at the parish for Mass and Adoration. The students have taken on roles in the parish as well as extraordinary ministers of the Eucharist and lectors. “It’s been good, it’s been a good relationship,” Father Pasche said.

In the summer months the population of St. Anthony of Padua grows much larger with “lake” visitors. Some have moved to “the lake” permanently and made St. Anthony their parish home.

Father Pasche’s sister and brother-in-law from nearby Michigan are members of the parish, as well as his niece and her family.

Father Pasche said administering the sacraments and “really touching people” sacramentally is his favorite aspect of the Priesthood. He called it “heartwarming” to have a couple of Mass servers that he baptized now taking a role in the Mass and parish.

Father Pasche was born and raised in Lansing, Michigan. He grew up in a parish that was staffed by Conventual Franciscans from Mount St. Francis in southern Indiana. He headed to the seminary in southern Indiana after the eighth grade, following in the footsteps of an older brother who attended the school for two-and-a-half years but then returned to Lansing after his younger brother arrived.

He told Today’s Catholic that he made a New Year’s resolution that he would play golf once a week, but he has only played four or five times this summer.

St. Anthony Parish has been the longest assignment of his 50 years of Priesthood. “It’s been a good one. That makes it all the harder to move,” Father Pasche noted.