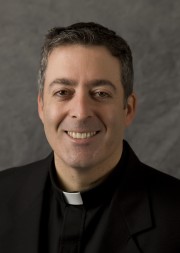 Holy Cross Father John DeRiso has been assigned as rector of the Shrine of Blessed Basil Moreau in Le Mans, France.

SOUTH BEND — The weekend of June 8-9 will be Holy Cross Father John DeRiso’s last at St. Joseph Church, South Bend, where he has served as pastor for the past nine years.

“Being your pastor has been the joy and privilege of my priesthood,” Father DeRiso told parishioners the weekend of May 4-5 as he announced a new assignment from his superior general in Rome at the site of the congregation’s foundation in Le Mans, France.

“It was here, in 1837, that our holy founder, Blessed Basil Moreau, united priests and lay brothers as equal partners within a single association, thereby forming the Congregation of Holy Cross,” he continued. “Our congregation’s motherhouse and its church — Our Lady of Holy Cross — serve as the symbol and center of this union. It is at this church, dedicated to Our Lady and the site of Moreau’s tomb, where I will minister as rector of the Shrine of Blessed Basil Moreau.”

“I expressed an interest nearly a year ago to the superior general (Holy Cross Father Richard Warner, former head of campus ministry at Notre Dame) to assist as I am able in responding to the needs of our congregation in Le Mans,” Father DeRiso said. “He was very responsive to my interest. The assignment is something he and the Holy Cross community would like me to do and I’m open to it.”

As rector, Father DeRiso’s main duty will be to establish the shrine in what now is a parish church with an existing pastor. Not only will the shrine be for the Congregation of Holy Cross, but for the local Church, the Diocese of Le Mans and the universal Church as well, he related. “Above all it is a spiritual and administrative task, and less of a physical construction one,” he said. “A beautiful church is already there and we will establish some offices for the shrine adjacent to it.”

The area is not new to Father DeRiso since he visited the location last month, making several acquaintances among the congregation’s French priests and brothers, and the Marianites of Holy Cross, religious sisters who also look to Blessed Moreau as their founder.

The French language also is not new to Father DeRiso since as a sophomore at Notre Dame he spent a year abroad as a participant in the University of Notre Dame’s Angers Program near his new location. “Everything, including all classes, was in French,” he related. Despite his past proficiency in the language some 22 years ago, prior to assuming his new position, he will spend seven weeks at Middlebury College in Vermont participating in an intensive French-language program. “Middlebury’s language school has an excellent reputation. I’m confident it will help me to greatly improve my French language skills.”

Father DeRiso also speaks Spanish. After his ordination to the Priesthood, April 6, 2002, at Notre Dame, his first assignment was to serve a mostly Spanish-speaking community as associate pastor at St. John Vianney Church, Goodyear, Ariz., just outside Phoenix. He was there two years before returning to South Bend.

Referring to his present parishioners, he added, “The gift of this parish is its people. I will miss them greatly! We’re just concluding a $4 million campaign begun last fall for a new parish center, school addition, church improvements and reconfiguration of parish grounds. It’s been a real team effort!” He thanks Bishop Kevin C. Rhoades, the late Bishop Emeritus John M. D’Arcy and the United States Province of the Congregation of Holy Cross for the support and encouragement given him during the time of his pastorate in the diocese.

Speaking of his arrival as pastor in 2004, Father DeRiso wrote to his parishioners, “I was 33 years old and had been a priest for two. I doubted my abilities and my readiness to assume a pastor’s role. I was anxious and afraid, but you welcomed me, the stranger, as your brother in Christ.”

“As before, I doubt my abilities and my readiness to assume a (new) role,” he continued. “I am anxious and afraid. And yet, I am called to a place of trust — trust in Divine Providence and trust in the Lord Jesus who said to His disciples, who themselves were troubled and afraid, ‘Peace I leave with you; my peace I give to you.’”

When we take on any new position I don’t think it’s uncommon to feel unworthy and perhaps not up to the task,” Father DeRiso explained. “But that’s when we turn to the Lord who makes us worthy and who gives us the grace we need to accomplish it. The Lord provides! I’m confident that’s what is going to happen for me (in France).”

He continued, “The gift of this assignment is that Blessed Moreau from Notre Dame de Sainte Croix in France sent Father Sorin to the woods of Indiana where he founded the University of Notre Dame in 1842. And now I, a spiritual son of Sorin having been educated at Notre Dame, graduating in 1993, am going back to help the Church in France. I’m not sure that’s happened before. It’s quite a privilege!”

Father DeRiso’s parents, Rudy and Mary Jo, of Cold Spring Harbor, N.Y. — where he was born, along with two brothers and a sister — will journey to South Bend to spend his last weekend at the parish with him.

“I’m glad they’re coming and very encouraged by my family’s support of my new assignment,” he said. “They’ll miss visiting South Bend and the friends they’ve made here, but perhaps they’ll enjoy visiting me in France as well!”