INDIANAPOLIS (CNS) — John and Megan Dugan were looking forward to March 25, John’s 50th birthday. They and their 13-year-old son, Charlie, would be on a cruise with several other families to celebrate.

Then the new coronavirus hit — not just the country, but the Dugans. Just 24 hours after the day marking his birth, John began a five-day fight for his life on a ventilator in an Indianapolis hospital.

“I felt like I was drowning,” he recalled. “I couldn’t breathe. It was the worst feeling in the world.”

Meanwhile, Megan suffered at home with the virus’ telltale fever, body aches and exhaustion. The days blurred as she slept for as much as 20 hours at a time. 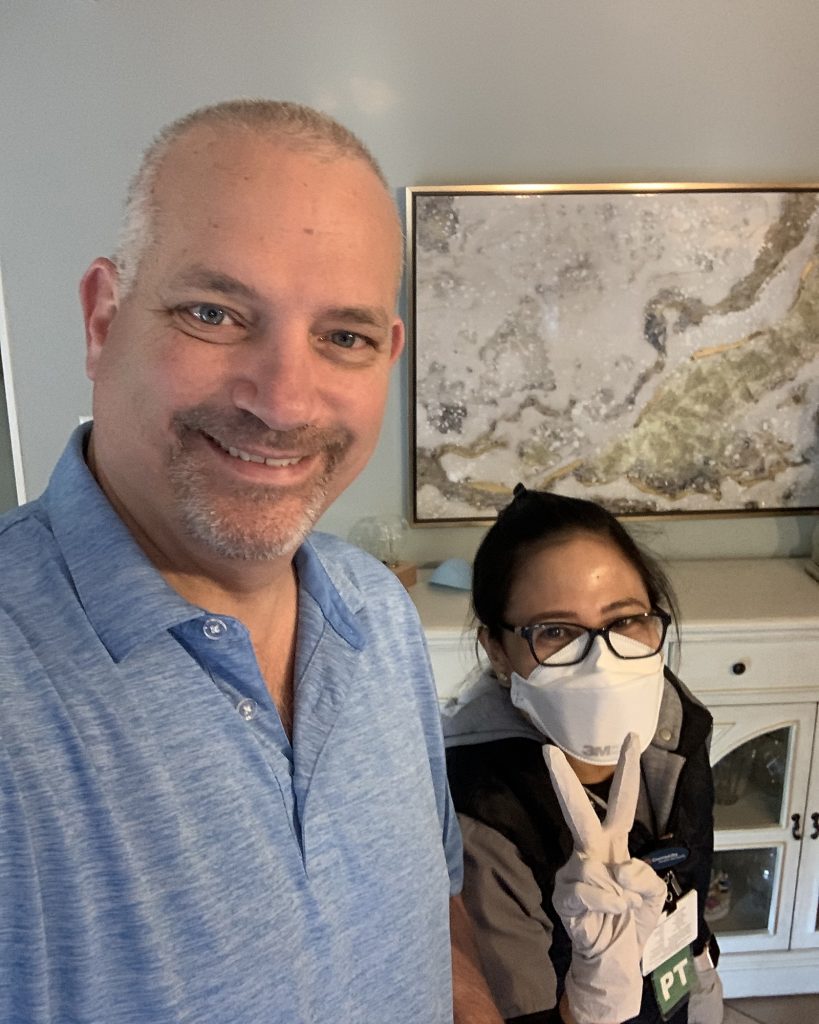 As his physical therapist offers a “V” for victory, John Dugan, a member of St. Barnabas Parish in Indianapolis, smiles after he finishes his final physical therapy session May 6, 2020, as part of his recovery from COVID-19, including five days on a ventilator. (CNS photo/courtesy John Dugan via The Criterion)

But the Dugans were not alone. Family, friends and even strangers stormed heaven with prayers. So did the members of their parish, St. Barnabas in Indianapolis.

“It’s not a story about me” or Megan, John insisted, but “a story of how God held (our) hands.”

March 16 was a normal day for John. He’d been in Logansport, conducting business for JCD Realty Group LLC, the property management and real estate group he established in 2001.

By the time he returned home, he wasn’t feeling well. He took his temperature. The thermometer read between 100 and 101 degrees.

But the next day he felt fine and returned to Logansport.

“I came home and played some basketball with Charlie,” he said. “I finally just had to stop. I felt horrible.”

For the next seven days, John’s temperature ranged between 101-103 degrees. His body ached and he was tired, but there was no coughing, no trouble breathing.

“Within an hour, his breathing changed rapidly,” Megan told The Criterion, newspaper of the Indianapolis archdiocese. “It all progressed really quickly. That was terrifying.”

At 9 p.m., she drove him to the hospital, where he was placed under observation.

Six hours later, John was admitted to the hospital and placed in the intensive care unit. It was March 25, his 50th birthday. Instead of celebrating with his family and friends on a cruise, he was isolated in a hospital, his coughing and shortness of breath worsening.

Late the next day, John was placed on a ventilator. So began a five-day struggle that John recalls as one long sensation of drowning and fighting to breathe.

“I didn’t understand I was on a ventilator that was breathing for me, so I kept trying to breathe myself, trying to cough up whatever was in my lungs. I’d think, ‘I can’t do this anymore,’ and drift off. But then I’d wake up and still be alive. I just prayed for someone to walk in the door and save me.”

Even though he felt like he was dying, said John, he never feared death.

“I felt God’s presence the whole time,” he said. “I felt scared of the pain, but not of dying, not of what would happen to me. I felt miserable, but peaceful. I knew it wasn’t in my hands. It was in the hands of God.”

After the ventilator was removed March 31, John learned how close he’d come to dying.

“I didn’t understand it until a nurse practitioner said, ‘I just want to say congratulations. I’ve been a nurse practitioner a long time, and I never talked to anyone who came off a ventilator,’” he remarked. “I asked her what she meant, and she said, ‘People just don’t get off those things.’ That’s when it really hit. I didn’t realize I was on it for five days.”

There was an outpouring of prayer on his behalf, from the kids in son Charlie’s sixth-grade class at St. Barnabas School and the St. Barnabas Men’s Club to the couple’s fellow parish marriage sponsor couples, their priest friends and fellow alums in the class of 1988 of Roncalli High School in Indianapolis.

He even learned that their parish priest, Father Daniel Mahan, had tried to visit him in the hospital to give him a blessing, “but they wouldn’t let him in,” said John.

John also learned later how sick his wife had been.

“The entire time he was in the hospital, I was home with a fever and body aches,” said Megan, special services manager for the technology company CDW.

She wanted “to be strong for Charlie,” who stayed in the upstairs portion of the family’s home while Megan stayed downstairs. At one point when her breathing became shallow, she knew if she went to the hospital, Charlie would have to stay with relatives, which could expose them to the coronavirus.

But Megan said she “had to power through it” — and she prayed.

“One minute I was getting on my knees and praying for God to save my husband’s life, to save me, to help the doctors. The next I’d be angry, yelling at God, ‘I can’t take this! Why are you doing this?’”

But just like John, Megan was not alone. She said the “outpouring of love and faith from friends, neighbors and strangers was amazing.” Members of the St. Barnabas MOMS group and sponsor couples reached out, preparing meals and asking how they could help.

John was released from the hospital April 2. Recovered now, the couple is thankful that they survived and that Charlie remained healthy.

They’re thankful for all the support they received and for the gift of faith — theirs and of all those who prayed for them.

He said the couple sees “God’s presence, how He works His grace through others, through what they say, what they do. You see life through the eyes of faith.”

Megan added that she and John are “so humbled by the outpouring of support and prayers from everyone” during what was a “traumatic, terrifying three weeks,” and now “we ask ourselves how we can we help others.”