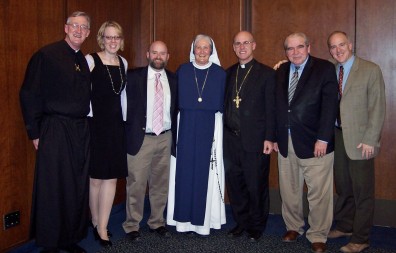 NOTRE DAME — Mother Agnes Mary Donovan and her religious community, the Sisters of Life, received the 2013 Notre Dame Evangelium Vitae Medal at a banquet at the University of Notre Dame April 3. The medal was inspired by Pope John Paul II’s 1995 encyclical “Evangelium Vitae” (“The Gospel of Life”).

The Sisters of Life became the third recipient of the annual award that was established in 2010 to honor individuals for their service to the Gospel of Life. The sisters are a relatively new religious community, having been founded in 1991 by Cardinal John O’Connor of New York.

They profess the usual vows of poverty, chastity and obedience, but also take a fourth vow to protect and enhance the sacredness of human life. Their ministry is to provide hospitality and support for pregnant women and to lead healing retreats for women and men who have suffered from abortion.

The medal citation noted that “In an age when the sanctity of life from its earliest to its final days is assaulted, you and the Sisters of Life have heroically worked with compassion and joy to foster and sustain the ‘unconditional respect for the right to life of every innocent person,’ ‘one of the pillars on which every civil society stands.’ Through your ‘daily gestures of openness, sacrifice and unselfish care,’ you and the Sisters of Life have exquisitely responded to ‘God’s commandment to protect human life,’ by ‘show(ing) reverence and love for every person and the life of every person.’” (The quotation marks within the citation indicates phrases taken from Evangelium Vitae.)

In her acceptance remarks, Mother Agnes Mary said that even though “Evangelium Vitae was issued after the foundation of the Sisters of Life, the sisters consider it to be their “magna carta.” Thus, “An award in its name is of very special meaning to us.”

Mother Agnes Mary noted that each human person is a “unique reflection of the Divine image,” the “summit of creation and life and love.” She said that Cardinal O’Connor would tell the sisters that the reason for their existence was to give a sign to others that every human being is sacred and very special.

“There is a lie at the heart of the culture of death that stifles hope and stamps out the light,” she continued. “To be pro-life is to offer to others the hope we receive in the Resurrection of Jesus that new life is possible, for every person, no matter what the past contains.”

Speaking about the power of maternal love in a culture that is “starving for authentic maternal love,” Mother Agnes said that “Each person is capable of greatness, of heroic love, of living beauty.”

Furthermore, “This capacity for greatness is never threatened by motherhood, even in the most inconvenient or trying circumstances. For it is through maternal love, whether spiritual or physical, that this potential for greatness is often set free.”

Mother Agnes Mary told the story of a young woman who was scheduled to undergo an abortion but was counseled by the sisters and by two other mothers the sisters were helping. She eventually decided to give birth to her child and then she, herself, joined in counseling other women with a crisis pregnancy, explaining that being a mother had changed everything for her.

“This is the power of maternal love: the power to protect a woman from tragedy, and the power to save the life of her child with the grace of God,” Mother Mary Agnes observed.

In his homily at the Mass that preceded the award banquet, Bishop Kevin C. Rhoades spoke about how happy he was that the University of Notre Dame bestowed the Evangelium Vitae Medal every year. The medal, he said, demonstrates the importance of a commitment to the sanctity of human life. He also praised the Sisters of Life for they dedication to women and their babies, and he called their founder, Cardinal O’Connor, “a champion of life.”

The Gospel for April 3 was Luke’s recounting of the disciples meeting Jesus on the road to Emmaus, but not recognizing Him until He broke bread with them in the evening.

“This Gospel has so much to teach us,” Bishop Rhoades said. “The Lord walks beside us on our journey of life. He is with us in times of disappointment and sadness. He is alive and ever present in our midst.”

Thus, he observed, “In the pro-life movement we encounter disappointment, but can never lose hope because the Lord walks beside us. To be a Christian is to walk with the Lord and let our eyes be opened to the word of God and to the presence of the Lord in the breaking of the bread, the Eucharist.”

The Evangelium Vitae Medal is sponsored by the Notre Dame Center for Ethics and Culture and made possible by the Notre Dame Fund to Protect Human Life. The 2011 and first recipient was Richard Doerflinger, associate director of the Secretariat for Pro-Life Activities of the United States Conference of Catholic Bishops. In 2012 the medal was awarded to pro-life leader and law professor Helen Alvare. The 2014 winner will be announced on Respect Life Sunday this coming October and the medal presented in the spring of 2014.