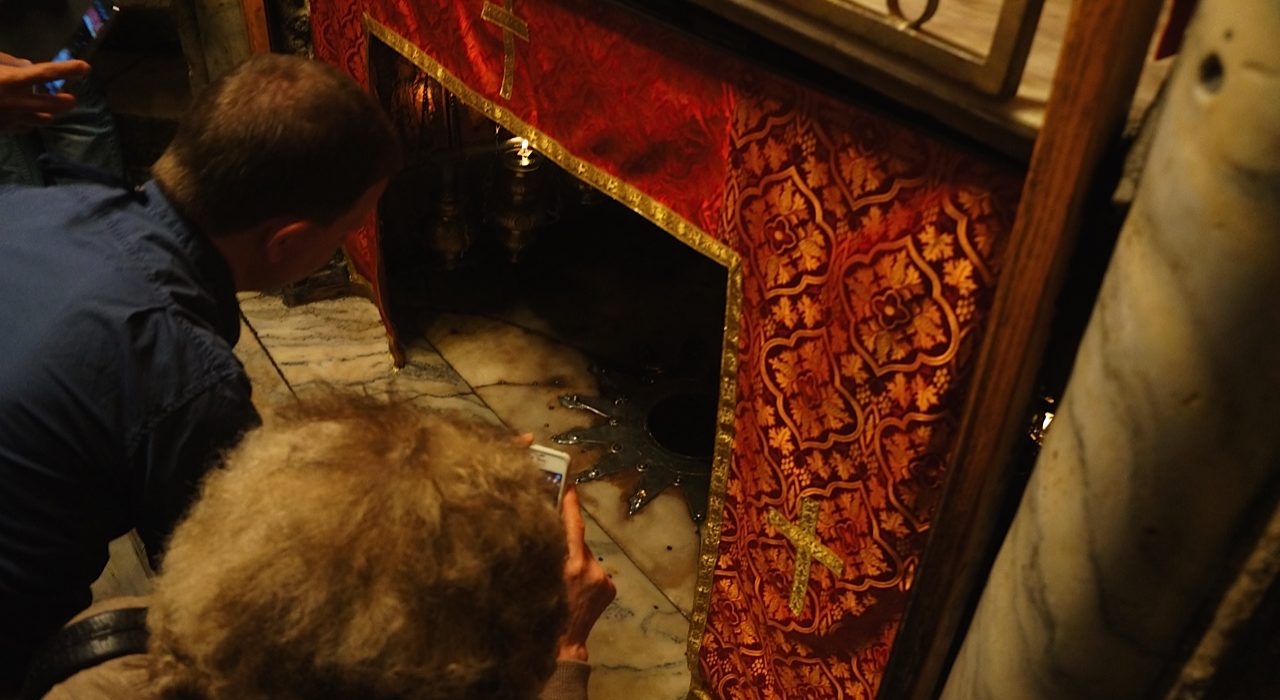 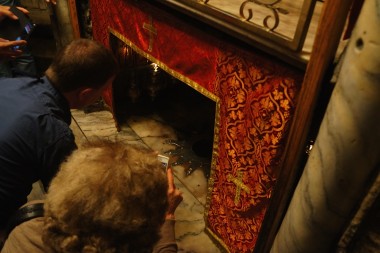 Dr. Thomas McGovern, who is a member of the Equestrian Order of the Holy Sepulchre, kneels to touch the 14-point star under crypt/cave altar where Christ is believed to have been born at the Church of the Nativity in Bethlehem. The 14-points refer to three cycles of 14 generations from Abraham to King David to Babylonian exile and to Christ according to genealogy in Matthew Chapter 1. Members of the order are expected to make a visit to the Holy Land. Dr. McGovern made a pilgrimage earlier this fall.

Catholics are sometimes surprised to see an unusual group of men and women in the processions at major diocesan events. The men wear white cloaks and black berets, and the women are dressed in black mantles and black chapel veils. Adorning the left shoulder of each cloak and mantle is a vivid red cross surrounded by four smaller crosses, the famed Jerusalem Cross. If the vesture looks medieval, there is a very good reason.

The men and women marching in procession are members of the Equestrian Order of the Holy Sepulchre of Jerusalem. They belong to a Catholic order of chivalry that stretches back more than 1,000 years and that today claims some 30,000 members worldwide in 35 different countries. The order has one chief purpose: To support the life of the Church in the Holy Land, especially the vital labors of the Latin Patriarchate of Jerusalem, the diocese for Latin Christians that stretches across Israel, Jordan, the West Bank, Gaza and Cyprus. The order, however, is committed not merely to maintaining the Christian presence in the Holy Land but helping it to flourish.

Given the horrific news coming out of the Middle East in recent years, the task is a very urgent one. Where Christians once were the majority, today in the Holy Land they comprise only 2 to 4 percent of the population. Christians are leaving their homeland because of the seemingly endless violence and the lack of economic opportunity.

For the Knights and Ladies of the Equestrian Order, a Holy Land without Christians is unthinkable, but this is a scattering that must be resisted not with military force but with prayer, humble service and generous gifts of time, talent and treasure.

The origins of the order are traced to the First Crusade in 1099, when Christian knights under the respected leader Godfrey de Bouillon captured Jerusalem from the Muslims. Before his untimely death the next year, Godfrey recruited a group of knights noted for their bravery and honor and asked that they and their successors pledge themselves to obedience, poverty and the fearless defense of the Holy Sepulchre and the holy places.

Thanks to the individual chapters that had been formed across Europe, the order survived the fall of Jerusalem to Islamic armies in 1187 and the final death of the Crusader States in the Holy Land in 1291. Its members continued to live the ideals of chivalry, including protection of the weak and, rarely, military service.

In 1847, Pope Blessed Pius IX, hoping to strengthen the Christian presence in the Holy Land, restored the Latin Patriarchate that had been defunct for centuries. He placed the order under the protection of the Holy See and commanded the Knights and Ladies to help the patriarchate and assist in propagating the faith across the region. Subsequent popes reorganized and modernized the order, including St. John Paul II who declared it a public association of the faithful in 1996.

The order, today, is headed by a Cardinal Grand Master, presently an American, Cardinal Edwin O’Brien, former archbishop of Baltimore. He is assisted by a consultative body called the Grand Magisterium, and by 52 lieutenancies, including 15 in North America and Canada.

Funds raised by the lieutenancies go to building and maintaining schools and the patriarchal seminary, as well as orphanages, clinics, housing and various special projects needed by the Latin Patriarchate and its 68 parishes. Recently, the order provided desperately needed aid to the people in Gaza because of the fighting between Israelis and Palestinians.

Membership is by invitation and is possible only after approval by a candidate’s pastor and bishop and finally the Holy See. Members are frequently reminded that to be a Knight or Lady is not some high honor but a life-long commitment to service undertaken with humility. They are expected to be faithful to the Vicar of Christ and the teachings of the Church; to be witnesses to the authentic Christian life; and to perform genuine acts of charity.

And then there is the close tie that exists between all Knights and Ladies and the very tomb of Christ in Jerusalem. Pope Francis told the members of the Order in 2013, “An ancient bond links you to the Holy Sepulchre, perennial memorial of Christ crucified who was laid there and of the Risen Christ who conquered death.”

Knights and Ladies are thus asked to make at least one pilgrimage to the Holy Land, to visit the key Christian sites — especially the Basilica of the Holy Sepulchre, Bethlehem, Nazareth and Galilee. It is an intense experience. Dr. Tom McGovern, the local section representative, including the 27 members of the order in the diocese, says of his recent journey to the Holy Land: “I understand the Gospels so much better after seeing where Jesus walked.”

Similarly, Deacon Jim Fitzpatrick, a member for 16 years, is grateful for the education regarding the “true situation” of the Christians in the Holy Land. “I think,” he observes, “the average person does not understand much about the Holy Land, other than what they might get from the evening news.”

The Order of the Holy Sepulchre is rooted in tradition and the past, but it strives every day to make a future possible for those living in the very birthplace of the Catholic faith.