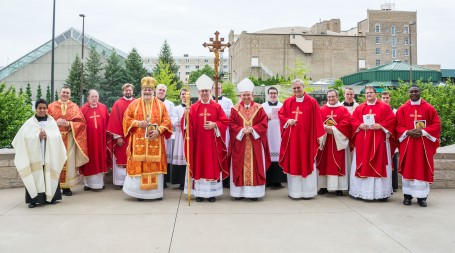 Bishop Kevin C. Rhoades, with Bishop Dwenger’s crozier, joins Archbishop José H. Gomez of Los Angeles, right, and Bishop John Michael Botean from the Romanian Catholic Diocese of St. George in Canton, Ohio, left, following a Mass at the Cathedral of the Immaculate Conception in Fort Wayne on May 14. The Mass was part of the conference, “Dorothy Day and the Church: Past, Present and Future Dorothy,” sponsored by the University of Saint Francis and Our Sunday Visitor.

FORT WAYNE — Archbishop José H. Gomez of Los Angeles discussed the remarkable life and achievements of Servant of God Dorothy Day and her impact on the 20th century and today at an address he delivered May 14 at the USF’s Robert Goldstine Performing Arts Center. The address was part of the May 13-15 conference “Dorothy Day and the Church: Past, Present and Future” and one of the celebrations marking the 125th anniversary of the University of Saint Francis in Fort Wayne. The conference was co-sponsored by Our Sunday Visitor in Huntington.

“I don’t know if she is a saint,” said Archbishop Gomez in his opening remarks in his address titled, “A Time for Saints: Dorothy Day and the 20th Century.”

Dorothy Day (1897-1980), an American journalist, social activist and devout Catholic convert, became known for her social justice campaigns in defense of the poor, forsaken, hungry and homeless. In the 1930s, Day worked closely with fellow activist Peter Maurin to establish the Catholic Worker Movement, a pacifist movement that continues to combine direct aid for the poor and homeless with nonviolent direct action on their behalf. She served as editor of the Catholic Worker newspaper from 1933 until her death. 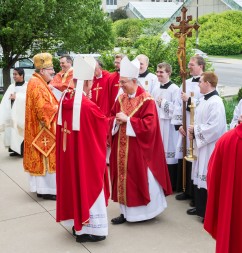 Bishop Kevin C. Rhoades greets Archbishop José H. Gomez of Los Angeles following the May 14 Mass at the Cathedral of the Immaculate Conception.

In the late 1990s steps were taken with the Vatican to begin her canonization process. The Archdiocese of New York was granted permission to open her cause in March 2000. She therefore is referred to as Servant of God.

Archbishop Gomez indicated that the journal of her life reads like a saint. Her reason for writing was to bring news to others of an inner war. In her newspaper articles and speeches she was writing the spiritual diary of the 20th century.

Admitting he was not an authority on Day, Archbishop Gomez said he came to the study of her life from the perspective of a pastor.

“I want to think and live like a saint,” he said. “I believe that what she has left us is a saint’s vision of our times and our society.”

“Her conversion story is the story of a soul,” he continued. “It was Dorothy’s experience of love and goodness that brought her to conversion. … In the glory of childbirth she came to see that God made us in His image. … She wanted to show us … the consequences of trying to live without God.”

Archbishop Gomez asked, “How do we continue to live as Christians in a society that has no room for Christ and for God? How do we live, work and raise our families? How do we carry out our mission?”

“Dorothy Day gives us a powerful vision of how to live in a secularized society,” he emphasized.

Archbishop Gomez noted, “The greatest danger of our age, I believe, is secularism.”

This is a time when men and women must rise up to be messengers and disciples and practice heroic charity, he related.

In order to live in this society, “the secularized society which we are, we need to strive to live in a close relationship with Jesus Christ,” Archbishop Gomez said.

The archbishop recalled a recent annual youth conference held in the Archdiocese of Los Angeles where 16,000 young people attended separate Masses in two large groups of 8,000 each. The theme of the liturgy was a rap song titled, “Talk Jesus with Me.” He said the catchy phrase obviously involves talking to Jesus and Jesus talking back.

Dorothy Day said all are called personally (by Jesus) to care for the poor. She helps show that the meaning of each life will be judged on the mercy shown to others. Each one is to strive for holiness. Dorothy Day said this is a time when there is more room for saints.

“God expects something from each one of us that no one else can do,” said Archbishop Gomez. “Keep following Jesus. ‘Talk Jesus with Me!’”

“I don’t know if Dorothy Day is a saint. That’s for the Church to decide,” the archbishop again remarked. “But she left us a beautiful legacy.”

Earlier in the afternoon, Archbishop Gomez celebrated Mass for those attending the conference and the faithful at the Cathedral of the Immaculate Conception in Fort Wayne. Bishop Kevin C. Rhoades, concelebrant, was the homilist.