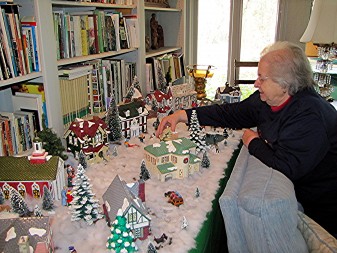 Donna examines a village building before setting it up.

More photos can be found in the photo gallery.

Fort Wayne — Donna Carteaux’s friends know that she can be reached at her “vacation home” at the North Pole during the holidays, somewhere deep in Department 56 Snow Village, where she happily hibernates.

The Fort Wayne resident mentally miniaturizes herself to walk among the tiny stores, post offices, three-story-high snow-covered pine trees, a hospital, churches, banks, and frozen mirrored ponds with ice skaters that create her small Main Street USA town. In this nostalgic winter community, Carteaux has all she needs — a doctor, dentist, pizza delivery girl, mail carrier, a garage mechanic and tow truck, a constable, a marching band and a freight train whose chugging lulls the little hamlet to sleep at night.

“People would also give them to me as gifts,” said Carteaux, who has Studio 56, Lemax, Old Towne and Heritage collections, with bits and pieces of other traditional villages.

“Currently, I have more than 2,000 pieces, and obtain them mostly at Menard’s, Hallmark, Kohl’s and other places. I’m very protective of my items and even my husband Bob will help me carry the boxes down from the attic when it’s time to set the display up, but no one, including him, is allowed to touch the pieces. In the past, I set up the display each holiday season, but in the last two years, we have kept the display up all year round. Previously, it took me a month to set up the whole presentation, which encompasses two open rooms in our home.”

Donna and Bob, who celebrated their 51st anniversary last May, have three children — Bob Jr., Debbie Martin, Liz Waldorf — and four grandchildren. The family enjoys traveling — Donna and Bob have been to 135 countries — and flower gardening, reading, cooking, music, writing and art are among Donna’s pastimes when not engrossed with her snow village neighborhood.

The Carteaux offspring, though now grown, become a tad mischievous when the display is set up. These adults derive great pleasure in wandering around the exhibit and causing wrecks with the sanitation trucks and autos and piling them on top of each other in various ditches.

Carteaux’s kids also call their mother, “Eagle Eye,” because she can walk into her setup rooms and tell instantly if anyone’s been there or if a tiny chair has been moved, even just a smidgen.

“They move some of the small pieces to see if I notice — yep, I do. They love keeping me on my toes, and I enjoy it too,” said Carteaux.

“My son-in-law is a die-hard Coke drinker but I was a long-time Pepsi drinker, so I cut out Pepsi signs and put them on the drug store and bottling company over the Coke signs.”

Her little town has been designed as a place where she’d like to live, especially where the snow resort and farms are concerned, said Carteaux, adding that her village is never complete due to new items always appearing in the stores.

“My favorite piece is the ski lodge,” says Carteaux, “because I imagine myself with a hot chocolate, sitting in front of a beautiful fire with a book, and watching the skiers.”

“And I love gazing at the ice skaters and the scenic farms.”

Several parts of the realistic festivity light up and come alive when plugged in, including the skaters and the skiers that go up and down the hill on a track. The trains, trolley and the toboggan are also activated, said Carteaux, whose inner child often makes up stories about various parts of the exhibit.

Visitors continually marvel at the virtual community spread out on Carteaux’s many tabletops, including some of the more unusual pieces such as the Grand Ole Opry Ryman Auditorium, a small Habitat for Humanity house and a country club. She would like to add a haunted house and a jail, if those two items are ever created.

Carteaux, a member of St. Elizabeth Ann Seton Catholic Church, also belongs to the Christ Child Society and the Third Order of St. Francis. For the past four years, she has made rosaries for the military, and faithfully continues doing this.

A peacemaker at heart and lifelong advocate for justice, Carteaux tries to live by the Rotarian code of “service above self.” And after exhausting hours of care-giving, her well-deserved “therapy time” flows predictably into her picturesque “vacation home” where tiny, colorful skaters waltz gaily over frozen ponds and nostalgic Christmas yesterdays live forever.