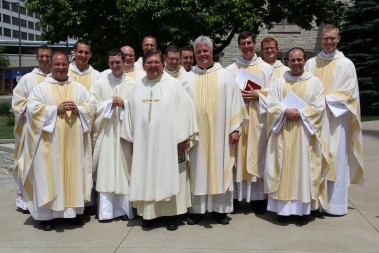 Msgr. Bernard Galic, director of vocations for the Diocese of Fort Wayne-South Bend, center, poses with 13 of the 24 priests who were ordained during his tenure. After 20 years at the post, Msgr. Galic will retire July 1. At left is Father Andrew Budzinski who will become the new vocations director at that time.

FORT WAYNE — When Bishop Kevin C. Rhoades recently asked Msgr. Bernard Galic how he felt about giving up the vocation work, Msgr. Galic said, “I won’t miss the work one bit, but what I will miss is my close association with seminarians.”

Bishop Rhoades told Today’s Catholic, “Msgr. Galic has served with great dedication for many years as our diocesan Director of Vocations. I am immensely grateful for his promotion of priestly vocations as well as his wise guidance of our seminarians. Most importantly, I am grateful for Msgr. Galic’s example of prayerfulness, joy and goodness as a priest. He has helped in the formation of dozens of our priests who are also deeply grateful to him.”

“Twenty years-plus on the job is a long time to be a part of the life and formation of the seminarians and I’ve grown to love it,” Msgr. Galic said.

And those seminarians who have been guided by Msgr. Galic through the process quickly return their admiration for the retiring vocation director, who is also the pastor of St. Aloysius Parish, Yoder.  Seminarian Bob Garrow, who will enter third-year theology at Mount St. Mary’s Seminary in Emmitsburg, Md. in the fall, said, “Msgr. Galic, was great to work with when going through the process of discernment. He has a way about him that puts one at ease. His kind words and helpful advice, which assist a man to grow in holiness, are attributes I will miss.”

“He always gave practical words of wisdom regarding what the Priesthood is and what it demands,” Seminarian Garrow added.

Recently ordained Deacon Jonathan Norton said, “Msgr. Galic is very patient and great at calming ‘stormy seas’ of vocational discernment. I met with him once during my senior year about applying for the seminary. I decided against applying but a few years later when I revisited the issue he was ready to pick up right where we left off. Again, when Bishop (John M.) D’Arcy asked me to take two years to grow in my spiritual life before going to seminary, Msgr. Galic was there to mentor me through those two years. He is a wonderful priest who radiates the priestly identity of fatherhood.”

Recently ordained Father Zachary Barry, parochial vicar of St. Vincent de Paul, Elkhart, said, “Msgr. Galic was a great guide in discernment from the first time I met him during my senior year of high school. His great knowledge of all the ins and outs of seminary and his calm and straightforward manner of explanation helped to keep me on track and focused in the right direction. I have learned much from his priestly wisdom and example and am very thankful for all the help and support he has given to me during my years in seminary.”

With the ordination of Father Zachary Barry to the Priesthood on June 7, Msgr. Galic can claim 24 priests ordained since he became vocation director. Looking ahead, if all the men in seminary persevere, “we’re going to ordain 13 more men in the coming three years,” Msgr. Galic noted.

Msgr. Galic recounted, “I know God is blessing our diocese when I look at the figures. Twenty years ago we had eight seminarians. This fall we will have 38. That’s quite a change.”

He attributes this change to prayer and God’s graces at work in the diocese. He also thinks the presence of happy priests is a boost. “I think every happy priest is a vocation recruiter, and all you have to do is look where our seminarians are coming from and you’ll see that borne out,” he noted. “They are coming from parishes where their priests exhibit love for the Priesthood.”

One of those parishes is St. Elizabeth Ann Seton in Fort Wayne. Father James Shafer, pastor there, said, “Monsignor has been very helpful to me during times I have been meeting with the seminarians from our parish. Then when it came time to make application to the diocese and seminary, he was extremely helpful to them. More than a few times, they have commented about his gentle spirit and good wisdom. He has been very encouraging with our young men.”

Msgr. Galic also attributes the growth in the numbers of seminarians to the tremendous influence St. John Paul II had on young people. “I believe in his continued intercession for vocations,” Msgr. Galic added. “And I think it is due in no small part to Bishop (John M.) D’Arcy and his intercession on behalf of the diocese before God’s throne, because he always had a very keen interest in vocations.”

Ordained in 1970, Msgr. Galic loves the Priesthood. “When I meet someone who is interested in the possibility of Priesthood in his future, I’m excited to talk about Priesthood with him. That’s one of the joys of being a vocation director. I get to hear their stories and nurture their interest and encourage them when I believe they are good candidates.”

Msgr. Galic’s interest in the Priesthood reaches back to his childhood. Reading Maryknoll magazine, he wanted to be a missionary priest in Africa teaching the faith “to savages.”

He entered a religious missionary order with African missions, but was assigned to teach in a seminary high school for 10 years. He likes to say, “I taught the faith to ‘savages,’ but in a classroom.”

Msgr. Galic was incardinated as a diocesan priest of the Diocese of Fort Wayne-South Bend in 1981.

“My model for the Priesthood as a kid was the old Monsignor we had for a pastor. He was a most caring man,” Msgr. Galic said. “He taught CCD classes of the high school students. I had him as a religion instructor for four years. All of us admired that man.”

“He was my idea of what I wanted to be when I grew up — my inspiration to apply to the seminary,” he said. “He personally drove me … to the seminary when I entered in 1959.”

Msgr. Galic added, “I am delighted with the bishop’s choice of Father Andrew Budzinski to follow me in this office.”

Father Budzinski received a degree in communications from the University of Notre Dame and worked in radio as an on-air personality and in sales for eight or nine years and then went to the seminary. Father Budzinski told Today’s Catholic that he told Msgr. Galic he is very thankful for leading him to the Priesthood. 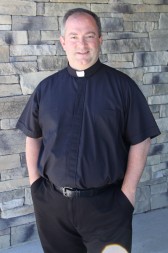 It’s off and running for Father Andrew Budzinski

FORT WAYNE — It’s off and running for the new director of vocations, Father Andrew Budzinski. After Father Budzinski takes his post on July 1, he has planned a Come and See retreat for July 18-19 at St. Vincent Parish.

A two-day retreat will be held at St. Vincent de Paul Parish, Fort Wayne, Friday, July 18, and Saturday, July 19. It is open to Catholic men who will be high school sophomores this coming fall or older. Priests from across the diocese will come in to give conferences on topics such as discernment, priestly identity, spirituality, “a day in the life” of a priest or seminarian and celibacy. The retreat will include small group discussions with seminarians leading, prayer after every conference, meals, recreation time, Mass, Confession and Adoration. A number of St. Vincent families have offered to be host families for all of the retreatants who attend from out of town.

Father Budzinski’s vision is this retreat will be offered next year on the South Bend side of the diocese.

Information and sign-up forms for the retreat can be found at diocesefwsb.org.

Many of the plans Father Budzinski has for vocations stem from successful programs implemented at St. Vincent de Paul, where he serves as the parochial vicar.

Father Budzinski implemented an idea from Father Daniel Scheidt, who is the pastor of St. Vincent de Paul in Fort Wayne, that when a young person expresses an interest in the Priesthood, Father Budzinski snaps off his collar and hands it to the youth. Often the collar has a sticker to the Vocation Office phone number and a verse from Mark 4:19, “… I will make you fishers of men.”

Effective for a young person in grade school, Father Budzinski said he tells the young person, “Here, this is a bookmark, and you use it as a bookmark until the day of your ordination, and then you can begin to use it as a collar.”

The Knights of Columbus at St. Vincent buy the collars in bulk.

Another vision that Father Budzinski hopes to extend to diocesan parishes is The Melchizedek Project, an initiative of Our Sunday Visitor in Huntington, that offers young men, high school and college age, a study group to read and learn more about the Priesthood. It uses a book, “To Save A Thousand Souls,” by Father Bret Brannen that is a guide to discerning a vocation to the diocesan Priesthood. Bishop Kevin C. Rhoades called the book the finest he has read on the topic.

The Melchizedek Project makes that book available for free to any parish or group that has an interest. St. Vincent started a group a few years ago. They met once a month to discuss the book, finished the study and went on to other books about Priesthood.

The group offers an opportunity to enter into prayer and discernment with other like-minded individuals. The evening includes dinner, a discussion and then prayer.

The group is open to any men in the diocese and meets on Tuesday nights at the Msgr. John Kuzmich Life Center from 6-7:30 p.m. They will meet the following dates this summer: July 1, July 15, July 29 and Aug. 12.

Similarly, a young women’s group focusing on religious vocations, called Totus Tuus (All Yours), meets as well and is coordinated once a month during the school year at St. Vincent Parish by the Sisters of St. Francis of Perpetual Adoration. The group follows the same format.

Before entering the Priesthood, Father Budzinski earned a degree in communications from the University of Notre Dame and enjoyed a successful career in radio both on air and in sales in South Bend.

Father Budzinski noted, “Years later when I sat in Msgr. Galic’s office to apply for the seminary, I said, ‘thank you for asking me to do the TV Mass. I don’t know if I would be here today had you not done that.’”

Father Budzinski said, “I’m ecstatic, very excited,” about being named the new vocation director. “It’s a very important work because we have to promote vocations in our diocese. We have to help all the young people of the diocese understand that God indeed does have a vocation planned for each of them and how to discern that vocation and then the courage to follow that.”

One half of his job, he said, is helping people to discern vocations, specifically to the diocesan Priesthood.

“The second half of the job then is shepherding the seminarians,” Father Budzinski added, “not only through the application process, but while they are in seminary and assisting them in their formation.”