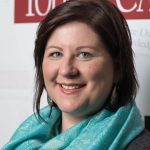 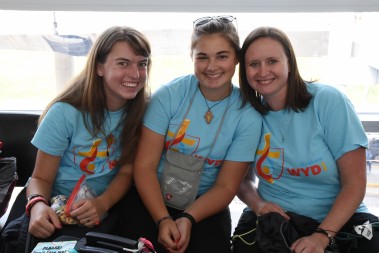 Visit the photo gallery for more photos from the World Youth Day pilgrimage.

Traveling to Poland for the 31st World Youth Day with Pope Francis were 137 pilgrims from the Diocese of Fort Wayne-South Bend. The theme of World Youth Day during this Jubilee Year of Mercy was “Blessed are the merciful, for they shall obtain mercy.”

It was so fitting to celebrate that theme in the country of Poland, which shared with the world two of the greatest saints of mercy, St. John Paul II and St. Faustina Kolwaska. But the theme of mercy wasn’t limited to these two impactful figures of our Catholic heritage. It permeated the lives of all of the saints pilgrims were able to encounter along the way, including Blessed Jerzy Popieluszko, St. Maximilian Kolbe and many others.

It’s difficult to encapsulate the entire WYD experience into a single article, video, picture or story. We offered intercessory prayers to Mary to join us as we pursued encounters with Jesus in both the large, glorious basilicas, and in small ways, alongside our friends and with relics of saints. There was laughter, song and jubilant fraternity through miles of walking. We also clung desperately to our rosaries as we prayed and mourned the dead of Auschwitz. Moments of quiet opened pathways for individual time with Jesus in Adoration of the Blessed Sacrament. And large Masses, Stations of the Cross and prayer vigils with not only our diocese, but millions of young people from all over the world, brought to life a new meaning of the phrase “universal church.”

It wasn’t until Krakow that we started to hear English spoken more frequently. Yet we stood alongside those from other countries as the Holy Mass was celebrated in other languages. We could see the physical bodies that make up the universal church speaking in different languages, yet professing the same faith. It produced an inescapable and almost indescribable joy. 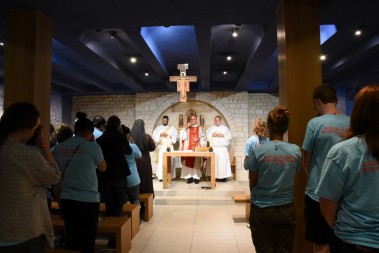 Estimates are that 300,000 people attended the opening Mass in Blonia Park in Krakow. It was a sobering call to stand in solidarity and support for our brothers and sisters who are living in countries, unlike the United States, where they are at greater risk for practicing and keeping their faith.

Part of our journey included going to places of tragedy and struggle. We learned of ancient kings, queens and bishops who influenced Poland’s religious history: like St. Stanislaus, who was martyred while saying Mass, and St. Jadwiga, who helped convert Poland to Christianity. Out of those efforts was borne a culture of devotion to Mary and a patriotic duty to protect the faith. It was this history that formed the young man Karol Woylyta a crusader of God’s Divine Mercy. We felt a connection when we visited Wadowice, his birthplace and hometown. We celebrated Mass at his home parish where he was baptized, received his holy first Communion and was confirmed.

By stepping into these historical places of persons of such great faith, we experienced the shared history of Catholicism.

One of the most difficult days to process was our visit to the concentration camps Aushwitz I and Aushwitz-Birkenau. We walked the very same roads and paths that millions of people shuffled down before their torture, starvation and death during World War II. Despite the sun on that day, the air was heavy. The only palatable response was silence as we prayed and walked through the camps.

Aushwitz-Birkenau was the perfection of a Nazi murder and torture factory. Yet, along the way we heard stories of how people risked their lives in order to show mercy in this horrific place, including St. Maximillian Kolbe, the Jewish uprising in the camps; and Oscar Schindler, who gave Jews work in his factory so that they could avoid the gas chambers. 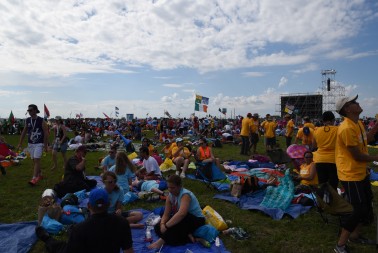 At the end of the day, with very heavy hearts, our group traveled to Divine Mercy Sanctuary. We celebrated a beautiful Mass with Cardinal Sean O’Malley, who reminded us that while we had just seen the culture of death that is Auschwitz, we can trust that there is hope in the culture of life that is the Divine Mercy.

Americans see so few architectural structures that can compare to the centuries-old Polish churches and shrines. Many of the cathedrals, churches and basilicas that we walked into literally take your breath away because of the intricacy of architecture, adornment of the altars, statuesque figures and pictures that point in the direction of the tabernacle. Their beauty draws us into a reverent state of mind and reminds us that the glorious nature of the physical elements are not even close to comparing with the beauty and glorious nature of God our Father. As Catholics, we believe that God is truly present in the Eucharist in the tabernacle and therefore it is fitting for us to have a place of beauty for our Savior and King.

As pilgrims, we had the opportunity to receive the sacraments of confession and the holy Mass. Spending that intentional time in prayer helped to shape and guide our days around what is important — focusing our eyes towards Heaven. Emboldened with the joy that comes from knowing that we are so desperately loved by our merciful God, we are called to bring that joy and that light to the darkness that seems to infiltrate our world at every turn.

It was so important for the young people of our diocese to fully enter into this pilgrimage, to see the powerful things they saw, because it is a part of our story. St. John Paul II isn’t just a part of Poland’s history, and Blessed Pier Giorgio Frassati doesn’t just belong to Italy. They belong to the church and to all of us.

The fraternity and authentic friendship from within our diocese and from all over the world was evident during this pilgrimage. All those pilgrims gathering together in peace and joy, and celebrating our faith in Jesus Christ with our Holy Father and all of the angels and saints, was powerful. The joy that was brought to Krakow from different countries and young people living the faith is something our young people can bring back home.

On this trip we witnessed places of great beauty that lifted our hearts to the glory of God. We saw and heard stories of young men and women who achieved sainthood through the blessing of God’s mercy in their lives. It serves as a call to all of us to embrace that challenge and that call to sainthood.

Youthful face of mercy can change the world, pope says

KRAKOW, Poland (CNS) — The youthful face of God’s mercy can change the hearts of people who have lost hope, Pope Francis said.

A young person who is touched by Christ is “capable of truly great things,” the pope told thousands of young men and women July 28 at the welcoming ceremony of World Youth Day in Krakow.

“Today the church — and I would add, the world — looks to you and wants to learn from you, to be reassured that the father’s mercy has an ever-youthful face and constantly invites us to be part of his kingdom,” the pope said.

Arriving at Blonia Park in his popemobile, Pope Francis was enveloped in a sea of red, yellow and blue as pilgrims donned brightly colored parkas to shield them from the rain.

Taking his seat on the main stage, the pope was welcomed by Cardinal Stanislaw Dziwisz of Krakow and six young men and women representing Europe, Asia, North America, South America, Africa and Australia.

After presenting him with a custom pilgrim’s book bag, a group of young performers from around the world entertained the pope and the crowd by dancing traditional dances. The dances ranged from a young Indian woman swaying to the tune of sitar to a couple masterfully dancing to tango music.

Following the Gospel reading, the pope thanked the youth for their presence, greeting them warmly saying, “At last, we are together.”

Encouraging them to cheer for St. John Paul II, the pope thanked his predecessor for initiating World Youth Day.

“From heaven, he is with us, and he sees all of you: So many young people from such a variety of nations, cultures and languages, but with one goal: that of rejoicing that Jesus is in our midst,” he said.

The pope noted the festive atmosphere of World Youth Day and praised the “enthusiasm, dedication, zeal and energy” of the young men and women who make God’s love palpable to the world.

However, while extolling the virtues of a young, merciful heart, the pope also lamented young people “who seem to have opted for ‘early retirement.’”

“It worries me to see young people who have ‘thrown in the towel’ before the game has even begun, who are defeated even before they begin to play, who walk around glumly as if life has no meaning,” he said.

Deep down, he added, “young people like this are bored and are boring.”

The celebration in Poland, the pope continued, offers an opportunity for young men and women to help each other and “not be robbed of the best of ourselves.”

Pope Francis encouraged the youths to look to Jesus to receive a “true passion for life” and to “give the very best of ourselves.”

“Are you looking for empty thrills in life, or do you want to feel a power that can give you a lasting sense of life and fulfillment? Which one do you want: empty thrills or the power of grace? To find fulfillment, to gain new strength, there is a way. It cannot be sold, it cannot be bought, it is not a thing, nor an object. It is a person: His name is Jesus Christ,” the pope said.

He also invited them to dedicate their time in Poland to listening to Jesus and to each other in order to live a full life and to embark “on the adventure of mercy.”

“Here we are, Lord! Send us to share your merciful love,” Pope Francis prayed. “We want to affirm that our lives are fulfilled when they are shaped by mercy, for that is the better part and it will never be taken from us.”