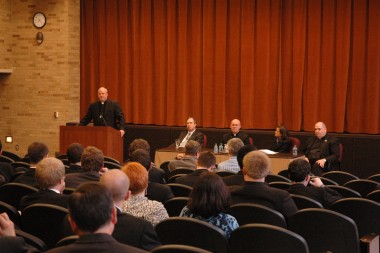 SOUTH BEND — With a goal of working toward full Christian unity with all Christians throughout the world, the Vatican is engaged in 16 different international dialogues with various other churches and communions. One of those dialogues took place in the Diocese of Fort Wayne-South Bend April 7-13.

Bishop Kevin C. Rhoades hosted the dialogue in South Bend between delegates of the Vatican’s Pontifical Council for Promoting Christian Unity (PCPCU) and delegates from the World Communion of Reformed Churches (WCRE).

Bishop Rhoades was appointed by the Vatican as co-chair of the fourth phase of the International Reformed-Catholic Dialogue, which began in 2011. The Reformed-Catholic Dialogue has been going on since 1970. Rev. Martha Moore-Keish of the Columbia Theological Seminary in Decatur, Ga., co-chairs the fourth phase of the dialogue on behalf of the WCRE.

The annual dialogue encounters are informal and usually restricted to the participants. However, an open panel discussion took place in the auditorium of Moreau Seminary on April 10 after the participants attended Mass and ate dinner at the seminary. Holy Cross seminarians and seminary faculty, as well as University of Notre Dame theology students and faculty attended the panel discussion.

Rev. Moore-Keish and Bishop Rhoades were joined on the panel by Father Gregory Fairbanks, an official with the Pontifical Council for Promoting Christian Unity, who assists Bishop Rhoades with the dialogue; and Rev. Douwe Visser, a Dutch theologian who is executive secretary for Theology, Mission and Communion for the WCRC. He assists Rev. Moore-Keish.

Father Fairbanks spoke about the ecumenical endeavors of the Catholic Church, explaining that the inter-faith dialogues start by seeking to overcome misperceptions, and then try to find commonalities while still recognizing differences.

Father Fairbanks said he is often asked why it’s important to talk to non-Catholics, and that answer is clear if one looks at Vatican II documents and the experience of ecumenism.

Secondly, he especially encouraged the seminarians to engage in the ecumenical movement when they become priests.

“It is true, as John Paul said in his encyclical on ecumenism, ‘Ut Unum Sint,’ that there is an exchange of gifts,” Father Fairbanks said. “We learn from each other, we grow together in Christ and all of our individual faiths in this community are strengthened by growing together, by praying together, by sharing our faiths with one another.”

Rev. Visser explained that ecumenical work was also very important to the WCRC, and that is why it participates in dialogues with the Catholic Church and with other churches.

“We still have that desire also for being one. And of course we are in many ways divided and in many ways we are also far from each other,” Rev. Visser said. “But when I was here this afternoon and being present at Mass and enjoying the beautiful music, there was also a moment when I thought that ‘We are on our way.’”

“We are not there yet, I realize that,” Rev. Visser said. “But we have that desire that we become one; but we also have the desire that we become one not with neglecting our differences and certainly not with neglecting what is still sorrow and concern in the world. And there I think we have much in common, because we long after all, for the Kingdom of God.”

Dialogue papers from the Catholic perspective were prepared by German theologian Annemarie Mayer of the University of Fribourg, Switzerland; and Peter Casarella, theology professor and founding director of DePaul University’s Center for World Catholicism and Intercultural Theology.

Reformed theologians giving papers were Rev. Reinerio Arce-Valentin, president of the Matanzas Evangelical Theological Seminary in Cuba; and Christopher Dorn of Western Theological Seminary, Holland, Mich. Other Reformed theologians participating in the dialogue were Rev. Marina Ngursangzeli Behera of India, presently teaching at the Ecumenical Institute at Chateau de Bossey in Switzerland; Rev. George Hunsinger of Princeton Theological Seminary; George Sabra, president of the Near East School of Theology in Beirut, Lebanon; and Rev. Lindsay Schluter of the Church of Scotland. Also a member of the dialogue but unable to attend is Rev. Benebo Fubara-Manuel of the Church of Nigeria.

The overall theme of the fourth phase of the Reformed-Catholic Dialogue was “Justification and Sacramentality: The Christian Community as an agent for justice.” Topics discussed at this dialogue meeting were “Justification and Sanctification” and “Prophetic Office and Authority in the Church.” The fourth meeting of the dialogue will take place in Scotland in April, 2014.