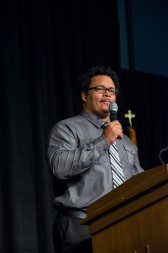 Ryan Bomberger, the banquet’s keynote speaker, was adopted into a multi-racial family of 15 and is himself an adoptive father. He and his wife, Bethany, founded The Radiance Foundation, a non-profit organization.

NOTRE DAME — More than 800 supporters of the pro-life cause gathered for St. Joseph County Right to Life’s (SJCRTL) annual benefit banquet on Oct. 29, held at the Joyce Center on the campus of the University of Notre Dame.

Before his invocation, Bishop Kevin C. Rhoades offered a reflection on the theme of solidarity. Christians and all people of faith, he said, are called to stand together on behalf of “the poor and those on the peripheries of society, the forgotten and the marginalized.”

“Solidarity is not only a social principle. It’s not just a vague feeling of compassion. It’s a moral virtue,” said Bishop Rhoades. The lack of solidarity we observe in our own society, he said, comes from “a preoccupation with one’s own welfare at the expense of others,” the hallmark of the “throw-away culture” of which Pope Francis so often speaks that applies “not only to material objects but even to human life itself.”

Bishop Rhoades expressed his gratitude for the work of SJCRTL and its supporters for their zeal in the work of defending life, exhorting them to continue to “go out to the peripheries,” bringing the mercy of God to those who most need it, especially the unborn.

Carter Snead, director of the Center for Ethics and Culture at the University of Notre Dame and honorary co-chair of the benefit banquet along with his wife, Leigh, spoke of the “joyful message of the pro-life movement, which witnesses to and embodies a belief in radical inclusiveness. This is the notion that every life matters and no one is to be excluded. Everyone is included in the circle of the human family, no matter how small, dependent, or ‘burdensome.’”

Tom Gill, SJCRTL board chair, reported on several significant issues that the organization addressed in the past year. First, he referenced the videos released by the Center for Medical Progress showing Planned Parenthood executives discussing the sale of aborted fetal parts. In response to these videos, SJCRTL joined pro-life organizations around the country in organizing a local rally denouncing Planned Parenthood and successfully called for Senator Joe Donnelly to support a bill that would withdraw federal funding of the organization. 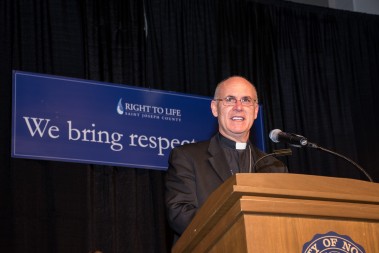 SJCRTL also spearheaded an effort to pass a county ordinance that would have required the local abortion clinic to meet the same standards that any other comparable surgical center has to follow. The ordinance did not pass, but it brought attention to the numerous health code violations and substandard conditions of the clinic. Largely due to the persistence of SJCRTL in filing complaints with the ISDH and Indiana Attorney General’s office about the clinic’s illegal practices (such as not reporting underage abortions and failing to abide by the informed consent law), the abortion clinic was ordered to cease performing abortions as of the close of business hours on Nov. 6.

In addition to these larger projects, SJCRTL has continued its ongoing mission of education, advocacy, outreach, and prayer, which includes media campaigns, the Life Team presentations in Catholic schools, Life Defenders boot camp for youth, protests in the community, sidewalk counseling, and the annual prayer dinner and Mother’s Day prayer vigil.

In the past year, 301 women chose to carry their baby to term after seeing a billboard or TV commercial funded by SJCRTL in conjunction with the Women’s Care Center.

Executive Director Jeanette Burdell said that the organization will also be expanding its adoption ad campaign in the coming year, the purpose of which will be to “de-stigmatize adoption to birth moms.”

Burdell, who worked as a counselor at the Women’s Care Center, said that adoption tends to have a negative connotation for many moms in crisis pregnancies. “Abortion is often viewed as the better option,” said Burdell. “We need to change that.” 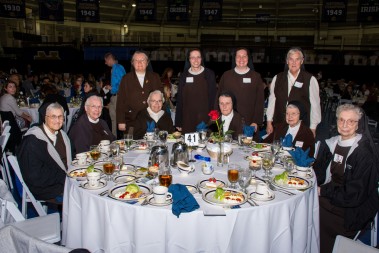 Ryan Bomberger, the banquet’s keynote speaker, was adopted into a multi-racial family of 15 and is himself an adoptive father. He and his wife, Bethany, founded The Radiance Foundation, a non-profit organization that seeks to influence culture with the pro-life message that every life has purpose.

Bomberger highlighted the fact that abortion rates are disproportionately higher among African Americans. In New York City, the home of Planned Parenthood, there are more black babies aborted than born alive. “And yet pro-abortion activists call this ‘reproductive justice,’” Bomberger said. Contrary to the promises of the abortion industry, there is not less suffering in the black community as a result of legalized abortion, he said, but simply “fewer people.”

Bomberger spoke of the courage of his own birth mother, who was raped, in giving him up for adoption, and of the generous self-giving of his adoptive parents who loved him and raised him with a deep sense of purpose for his life. 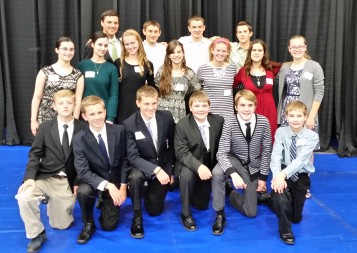 A group of homeschooled students from the Michiana area attend the St. Joseph County Right to Life’s benefit banquet on Oct. 29 at Notre Dame.