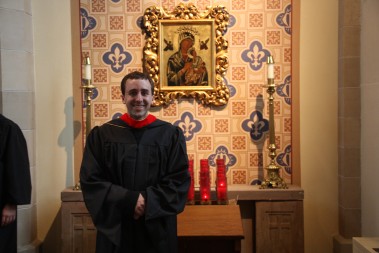 The Pontifical College Josephinum held its 114th Commencement on Saturday, May 11. Deacon Christopher Lapp from the Diocese of Fort Wayne-South Bend received a master of arts in dogmatic theology; a master of divinity; and a baccalaureate in sacred theology.

FORT WAYNE — Bishop Kevin C. Rhoades will ordain Deacon Christopher Lapp to the Priesthood on Saturday, June 1, at 11 a.m. at the Cathedral of the Immaculate Conception in Fort Wayne.

Of the approaching ordination to the Priesthood, Deacon Lapp told Today’s Catholic in an email interview earlier in the year, “I’m looking forward to seeing a conclusion to formal preparation for Priesthood so as to be able to live my vocation in all of its concrete reality. In short, I am looking forward to being what God has created me to be.”

Deacon Lapp said, “Being able to live at a parish has provided me beautiful experiences of the depth of relationship a priest is called to have with his people.”

“My last summer at St. Therese was especially full and rewarding because of the opportunities to regularly preach to the people with whom I lived in Waynedale,” he added.

Of his diaconate year, Deacon Lapp said, “This year, seminary formation has shifted from primarily theology classes to a stronger emphasis on elements of ‘praxis’ in priesthood — instruction on hearing Confessions, celebrating Mass, etc.”

“My brother deacons and I also all have parish assignments where we go on the weekend, primarily assisting at Sunday Masses (and occasionally preaching) and helping with Baptisms,” he said. “As scheduling permits, we also try to find time to do some teaching, youth ministry, marriage preparation and just about anything else that comes up!”

Deacon Lapp traces the beginnings of his journey to the Priesthood to Bishop Dwenger High School’s strong theology and campus ministry program.

“I became truly interested in learning theology in high school and the theology classes kept me on my toes,” he said.

He also credits the priests at his home parish: “The priests at St. Vincent’s especially helped me consider a vocation to the Priesthood — especially Msgr. (John) Kuzmich, who has been my only pastor and a wonderful priestly example. And the people there are amazing.”

He added, “Lastly, my family helped me to grow up to be free to embrace whatever the Lord invited me to; and I received tremendous support when I entered seminary. This support has been a sturdy shelter throughout the ups and downs of the last several years.”

Deacon Lapp, who was ordained to the diaconate May 12 last year at the Cathedral of the Immaculate Conception in Fort Wayne, has the opinion that every Catholic man “needs to explicitly open his heart to the possibility of a priestly vocation.”

“I have confidence that God is calling many more men to answer this call,” Deacon Lapp noted. “So much does He love us and desire for us to have the Eucharist and other sacraments. We can and should pray that these men are courageous in the face of any number of oppositions that present themselves, especially the culture, friends, personal expectations, and even at times family.”

Deacon Lapp said there were “signs” along his journey that reassured him. Those were, he said, “abiding peace, good and faithful prayer, parish and apostolate experiences.”

“Further, I ‘knew’ when Bishop Rhoades sent me a letter officially ‘calling’ me to present myself for ordination to the diaconate, and then ultimately as I knelt before him after the laying on of hands and during the Prayer of Ordination,” Deacon Lapp added. “The Church always confirms a vocation; and this has been a tremendous consolation to me. Fundamentally, we are called to acknowledge reality like Mary in asking the angel, ‘how can this be?’ rather than wallowing in doubt as Zecheriah: ‘how can I know this?’”

More and more Catholic men are entering the seminary. Deacon Lapp contributed this increase to “prayer, patience and the practice of accepting men of good quality in this diocese. …”

He added, “Better catechesis, youth ministry, preaching and vocations work, and many other things are certainly there, too.”

“We trust that God will continue to provide for our needs; and we do our best to cooperate with Him.” Deacon Lapp said.

“Of the seminarians I know, there is a seemingly universal desire to live radical lives of self-emptying love for the salvation of souls,” he noted. “The men generally attribute their own closeness to Jesus in the Eucharist and love of Holy Mass above other things which I would include myself in, as well.”

For the people in the pews, Deacon Lapp encourages the faithful to pray for vocations. “Pray,” he said, “especially for more men to open their hearts to the possibility of a priestly vocation and for the courage to embrace it. Also, affirm young men in their striving to live lives of virtue. And don’t be afraid to directly ask him to consider a vocation to the priesthood; many here in the seminary will admit that those encounters stuck with them and, like a gnat, got them to take the Lord’s actual invitation seriously.”

As the June 1 Ordination to the Priesthood approaches, Deacon Lapp concluded, “At 27 years old, with most of my friends married and starting families, I am definitely looking forward to all of the relational dynamics of Priesthood, especially embracing spiritual fatherhood within the context of parish life.” 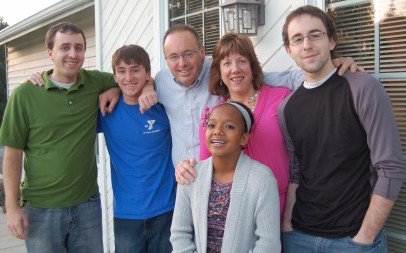 From left are Chris, Josh, Greg, Juli, Nick with Becca Lapp in front.

FORT WAYNE — Deacon Christopher Lapp has been preparing intellectually, emotionally and spiritually for his ordination into the Priesthood on June 1 for a long time and his family has been a steadfast support all along the way. His parents Greg and Juli are in awe of their son’s vocation and look forward to his future with joy.

“It is a great and amazing feeling,” they chime as they recall the beginning of their son Chris’s journey toward the priesthood. As a young boy Chris was intelligent and precocious, they say. And because he was so very curious and technical his dad imagined that he would follow in his footsteps and become an engineer. Always a strong, self-motivated student, athlete and Cub Scout, his parents were proud of not only his intelligence, but his character as well.

When thinking back over the years, the Lapps, who are parishioners of St. Vincent de Paul Parish in Fort Wayne, recall how Chris’s faith developed during his years of high school when he began attending the Lifeteen program at their church after Sunday Mass and ministry hour on Wednesday nights as well. He even prayed at the abortion clinic once a week and never missed an overnight Lifeteen retreat.

“Our faith has supported our marriage over the past 31 years,” notes Juli, who along with Greg has also worked with couples preparing for marriage for over 15 years.

The Lapps have lived that faith in their home with their children Chris, Josh, Nick and Becca.

Greg says, “My faith is important because it is the center of my existence. …  My vocation as a parent is to impart the faith to each of my children and try to do all I can for them to secure their place in heaven.”

Juli adds, “My mother has been the one who inspired my faith. We lost my Dad in 1972 and she always guided us and prayed for her children. I’ve tried to be the same example for my children.”

As his vocational call became apparent to Chris during his freshman year at the University of Dayton, his dad recalls his own surprise and joy when his son disclosed his decision the day after Thanksgiving in 2004 while they hung Christmas lights together. “For me it has been a very emotional experience,” says Greg. “I am so in awe that God called my son to administer the sacraments and serve the Church in a special way as persona Christi that every time I think of the upcoming ordination I am moved to tears.” Their son will become the first priest in their family on either side.

As Deacon Lapp continued his studies at the seminary his family stayed in close contact. They say, “Meeting the other seminarians and their parents has been a very good experience. We have been blessed to get to know some of the great young priests that have been ordained over the last several years.”

And knowing the quality of men studying for service in his diocese Greg says, “I am so optimistic for the future of our Church because of the amazing quality of the men being called to the Priesthood at this time. … Our diocese is truly blessed.”

Juli agrees and adds, “All of these seminarians make a mom feel like she has more sons in her life.”

Deacon Lapp shared a special friendship with Bishop John M. D’Arcy, who was instrumental in his commitment to the Priesthood. The grief over Bishop D’Arcy’s recent death will be with them all and they say, “Just thinking of this on June 2 at Christopher’s first Mass, knowing Bishop D’Arcy is looking down on him will bring tears to our eyes.”

What kind of priest will Greg and Juli’s son be? The Lapps say, “Chris is going to make an awesome priest. He is very intelligent and he understands the history of our Church. He knows where we have been and how we got there and most importantly where we need to go as the Church.” Greg continues, “Chris is a very conservative Catholic. He loves the Church especially all of the traditions and he will always follow the tenets of the faith. Chris has a lot of energy and he relates well to all kinds of people.”

Juli says of her son, “I agree with Greg and also know that whatever parish gets Chris is very lucky. He is very self motivated, caring, a great listener, full of common sense and good problem solver. Chris is also a leader and will be very proactive in doing what needs to be done in the parish.”