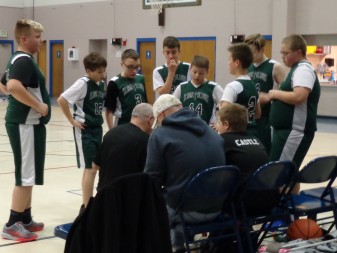 Members of the boys’ St. Rose/St. Louis seventh-grade basketball team listen to their coaches during a timeout at the annual Hoopfest Christmas holiday basketball tournament. The Twins played hard again the St. Charles team, but were outmanned and lost to the Cardinals 53-18.

For the past 21 years there has been a Christmas holiday basketball tournament, now called “Hoopfest.” Denny Jamison has done the organizational work for the event in recent years.

Hoopfest tournament tipoff was Monday, Dec. 27 at St. Vincent at 4 p.m. It was raining buckets of water outside as the tournament got underway. The St. Jude seventh-grade girl Eagles played against the home Panthers squad, a game that proved to be quite a barnburner.

St. Jude jumped out to a quick 8-2 lead in the first quarter, with four Eagles players each contributing two points in a balanced scoring attack. The second quarter featured much of the same and the half ended in an 18-9 tally, with the home team trailing.

St. Vincent was not ready to give up and rallied to a 20-16 score at the end of the third quarter. The Panthers’ scoring was led by Emily Szepanski and Kaylee Mulligan. A very close fourth quarter followed, with both teams vying for the win. The game was tied 25-25 going into the final minute, before Ava Panza of St. Jude poured in the winning bucket with just a few seconds left on the clock. Top scorers for St. Jude were Ava Panza and Bekah Landstoffer, and Hoopfest was off to an exciting start.

Although the Twins gave it everything they had, they were outmanned by the Cardinals. St. Charles immediately jumped out to a 15-3 first quarter lead and never looked back. Scores at the quarter stops were 15-3, 26-9 and 41-11. The final score was 53-18. St. Charles had balanced scoring, with nine players contributing to the win. Joe Smith had 12 points, including two three-point buckets. Henry O’Keefe followed with nine points, and Gavin Groves and Joe Eddy each contributed seven. St. Charles played with its squads substituting in and out to remain fresh, which proved too much for the undermanned yet tenacious St. Rose/St. Louis team.

The 5 p.m. Thursday-night game at Saint Francis’ was an elimination game between the eighth-grade girls of St. Vincent de Paul and St. John the Baptist, New Haven. The winner would advance on to the final bracket, while the loser faced elimination.

Both teams seemed to sense the importance of the game, which went into overtime. St. Vincent led at the end of the first two quarters, 6-3 and 9-8. After the halftime break St. John fought back, led by Rachel McCarthy’s five points. The exciting fourth quarter had the teams fighting to an 18-18 tie. The three-minute overtime period was won at the free-throw line, where St. Vincent sank four of six. Ashland Bennett of St. Vincent’s totaled 10 points for the contest, while Rachel McCarthy of the St. John Raiders led all scorers in the nail-biter.

Friday-night action was highlighted by the eighth-grade boys’ finals at the University of Saint Francis. St. Vincent entered the game from the loser’s bracket, with one tournament loss and played the St. Charles squad.

St. Vincent battled from behind the entire game and was unable to derail the Cardinals. Despite a stellar performance from St. Vincent’s Dillon Olson, St. Charles sealed the victory with a 43-35 final score. Olson’s strong performance netted 19 points, including three three-pointers. Eleven of those points came in the fourth quarter of play. Meanwhile, St. Charles was led by Brenden Lytle’s 19 points, which include three three-point shots as well. Devon Tippmann chipped in eight points for the Cardinals in the victory.