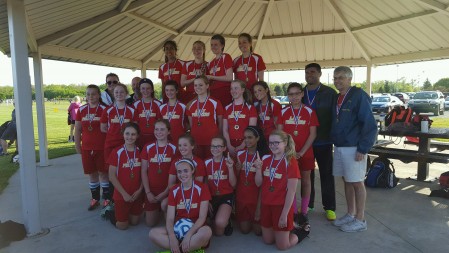 The CYO end of season soccer tournament concluded the week of May 16-20 at Fort Wayne’s Kreager Park with exciting soccer action. Bad weather forced tournament games to be extended an additional week.

The big news was a ”sweep” by St. Elizabeth’s 7th and 8th grade girls’ and boys’ teams in championship games. In the girls’ action St. Elizabeth scored a convincing 6-0 victory over a determined St. Charles soccer squad. St. Charles had fallen earlier in the regular season to St. Elizabeth 3-0. The girls’ team was coached to victory by Mark Walden.

St. Elizabeth’s 7th and 8th boys’ team followed suit by defeating the St. Vincent 8th grade boys in a close 2-1 “nail biter.” The victory avenged an earlier regular season St. Vincent victory. This was the fourth year the two teams have battled in the tournament. The boys’ team is coached by Matt Schenkel with assistant Mark Coffee. Congratulations to both teams and their very successful soccer programs this year at St. Elizabeth.

5th and 6th grade action also experienced weather delays. St. Jude’s 5th and 6th grade girls completed a “perfect season” by besting St. Vincent’s 5th grade girls 4-1. The undefeated St. Jude’s team is coached by James Ewing. Coach Ewing expressed delight in his team’s efforts this year, especially during the tournament. Emma Farar had a “hat trick” of 3 goals in the championship game. The coach was also impressed with goalie Lilie Tippman’s efforts over the course of the unblemished season. 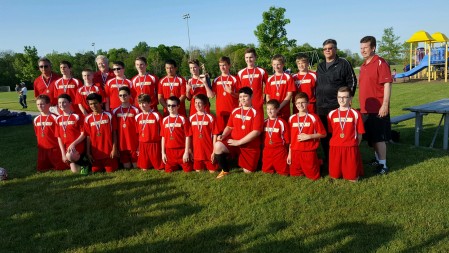 Thursday, May 19 the 5th and 6th grade boys team at St. Joseph completed the “buzz” mentioned in last week’s Today’s Catholic. Facing the St. Charles 5th grade team (with whom they had tied in the regular season) the St. Joseph Panthers charged to a 5-1 victory, capping a memorable first season in CYO soccer play. In previous years St. Joseph had been combined with St. Elizabeth. This has been quite a memorable season for the school.

This completes a wrap up of this spring 2016 CYO soccer tournament action. It has certainly been a year to remember.

Look for a similar wrap up of other CYO spring 2016 sports next week. Several new records were set this year in track and field, and softball provided some equally exciting action as well.