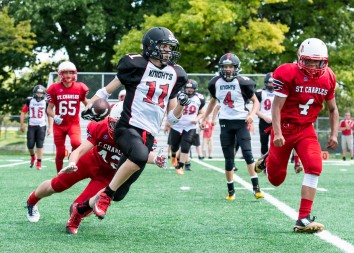 September is upon us, and it’s time to look into the competitive world of CYO football. From the schedules submitted last issue, it’s not hard to imagine battles shaping up this year between the Fort Wayne schools, including a week three match-up between St. Vincent and defending champion St. Charles. Today’s Catholic goes back into weekly circulation Sept. 25, and highlights from one game each week will be provided. This will not necessarily be a match-up of the two highest ranked teams, so as to provide some coverage for all the teams.

The first of four teams to focus on is the Central Catholic Fighting Irish. The Irish are made up of five schools: St. John, St. Jude, Most Precious Blood, Queen of Angels, and St. Louis Besancon. Central Catholic, although coming off a winless season last year is optimistic with 12 returning players from 2015.

Head Coach Douge said, “This is a team that has come together well considering all the logistics that have to happen to have this many schools come together. The players are embracing what it means to be a team member/player and contribute to the team in any manner where they fit. The willingness of the players to step up when called upon has been a true blessing for the coaching staff. They are a great group to coach.”

Because of Central Catholic’s small size the team needs to be creative in their game plan. Fundamentals of blocking and tackling are always stressed and are always in need of work and improvement, as with any team. 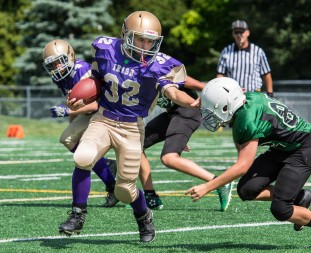 The Central Catholic Fighting Irish take on St. Vincent in week one play.

Coach Douge said of his philosophy: “We have a great opportunity to coach young Catholic men and learn how to keep whatever we do centered on Christ. Not every league has the opportunity to do that and we are blessed to play in the CYO. Second point is to have fun. My experience is if the kids are not having fun they will lose interest and if we have lost a player who could develop later and not like football because of an experience he may have had, it is a failure on our part as coaches. Our biggest goal is to have all of our current players return for the next year and bring others with them. Having fun, learning the game and coaching fundamentals that put them in a position to compete are important.”

“The team goal is to be competitive in every moment including games, practices, etc. We treat everything as a competition with the hopes that these young men will be able to face adversity when it comes their way and get through it. If the team is competing well, great things will happen.”

Trying to improve upon last year’s 6-3 record are the St. Vincent Panthers. The Panthers return 10 players from a very successful 2015 campaign.

The Panthers have several team strengths this coming season including a strong offensive and defensive line, an experienced quarterback, and good conditioning despite low numbers. Because of low numbers, St. Vincent will not have a seventh-grade team this year. There will be 15 players for the combined seventh and eighth-grade team. Four of those players are seventh graders who Coach Witte said, “will need to make contributions despite their youth.”

“Control the offensive and defensive line of scrimmage. Win the turnover battle each game. All eleven defenders must fly to the ball,” Coach Witte said about his philosopy.

An interesting team goal is that the current eighth-graders won the CYO championship as  sixth-graders and want to repeat now as eighth-graders. The team motto is “100 percent on every rep and every play.”

Standout seventh-grade players include: Henry O’Keefe (running back and defensive back). Coach Talarico is quick to point out O’Keefe’s outstanding quickness and change of direction… the best in the coach’s ten years with the program, Adam Lee (DB and RB, a tremendous leader and competitor) and Joe Eddy (likely starting center.

Coach Talarico said of theteam strengths: “This team has a tremendous work ethic and is very unselfish. Kids are stepping into new roles to help the team. We have had a string of outstanding quarterbacks at St. Charles but Brenden Lytle may be the best we have had from a pure talent perspective. Devon Tippmann will be a force to be reckoned with at middle linebacker. Improvements can be made on the little things: running crisp patterns, executing play fakes and knowing blocking assignments.”

“Never lose sight that the number one objective of CYO football should be to have fun. We want the kids to enjoy the season and not dread practices. We also want every kid to feel like a valuable part of our team.”

Goals for the team include continuing the current 20 game winning streak — the Cardinals have not lost since October 20, 2013 — and success at the diocesan championship having won 3 of the last 4.

This year the CYO Knights would like to improve on last year’s 2-5 record.

As the team has been working hard in early practices, the coach prefers not to name any standout players right now. In early practices, they are learning individual capabilities and just which Knight will be a good fit for each position. This continues to be a learning process for the Knights at this time.

Team strengths include very good listening skills, everyone’s willingness to show up and work hard. Coach Carroll commented that “They are a great group of young men.”

Coach Carroll’s philosophy is to “Keep it loose, keep it real, keep it fun. Learn something, pray and get better each day.”

The team has a simple goal: “They are all just interested in being football players and enjoying the brotherhood that only a football team can create.”