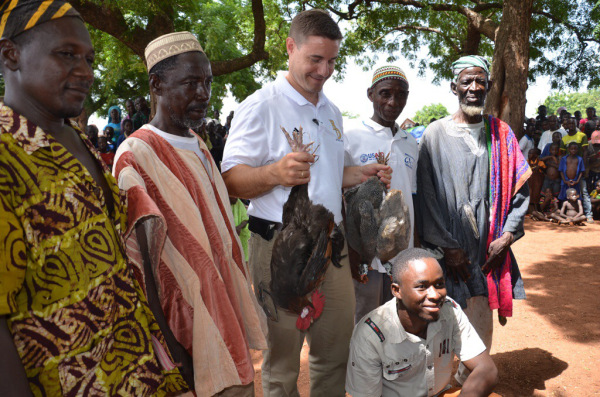 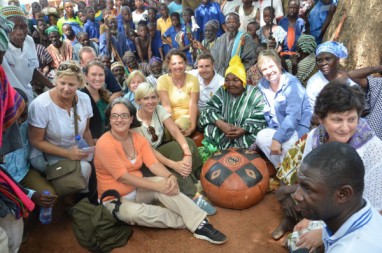 Melissa Wheeler, second from left in front, theology teacher at Bishop Dwenger High School in Fort Wayne and the diocesan representative for Catholic Relief Services (CRS) appointed by Bishop Kevin C. Rhoades, and Bishop Dwenger Principal Jason Schiffli, back center, join CRS workers and members of the delegation who met with the Queen Mother, right of Schiffli, the leadership of the Samini Tribe, during their immersion experience in Ghana, in partnership with Catholic Relief Services to promote global solidarity.

FORT WAYNE — Bishop Dwenger High School has recently partnered with Catholic Relief Services (CRS) in an innovative initiative to help raise awareness of global issues right in the Fort Wayne community. The CRS: Global High School program, formally known as iNeighbor, began in 2011 when six specially chosen high schools from around the country were invited to join its initiative to build global solidarity. Each invited school completed an application for participation approval and was required to send one administrator and one faculty member to participate in international immersion experiences to see firsthand how CRS’s programs are changing lives. Currently the CRS: Global High School program has grown to include 15 schools.

Bishop Dwenger began their partnership with a workshop on social justice given by a CRS representative. This year Bishop Dwenger Principal Jason Schiffli and theology teacher Melissa Wheeler, who is also the diocesan representative for CRS appointed by Bishop Kevin C. Rhoades, traveled as part of a 10-person delegation to Ghana July 7-16. Their mission, said Schiffli, was to visit remote villages in Ghana, one of the 100 countries around the world where CRS programs are successfully promoting health and hygiene programs for the people there. 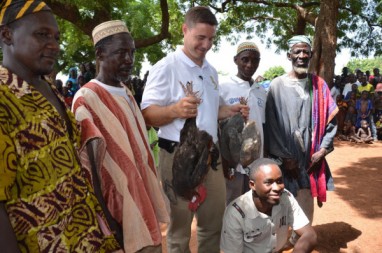 Following a visit with the Queen Mother of the Samini tribe, the natives presented the delegation with two live guinea fowl for dinner and one live rooster for a wake up call. Pictured is Jason Schiffli, principal of Bishop Dwenger in Fort Wayne, accepting the live gifts.

“It was not a mission team,” says Schiffli. “We didn’t build or dig. It was a delegation to see the programs and how they were organized and planned.” The successful programs are changing lives and communities, he reports, adding that the purpose of the trip was to bring information back to the school community to raise awareness.

An initial training was held in Baltimore, the location of CRS headquarters, for Schiffli, Wheeler and the other four high school representatives, two from Philadelphia and two from New Orleans, prior to their travels to Ghana. “Chris West, CRS community organizer, built a support group there to communicate throughout the year,” says Schiffli, who plans to expand their communication as the action plan for global solidarity at Bishop Dwenger develops.

The delegation arrived in Accra, the capital of Ghana, then traveled to northern Tamale where more “traditional communities” comprised of villages with chiefs were located. In the adobe-hut-lined villages the team found water supplies or boreholes shared by more than one village with women transporting water baskets on their heads, sometimes for miles. 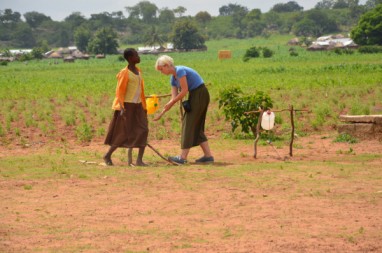 A visitor washes her hands alongside a native of a remote village near Tamale, Ghana with a tippy tap, a jug of water connected to a foot lever to ensure sanitation for the area. CRS has helped the people there implement hygiene and sanitation methods that have reduced infant mortality.

To assist the villagers with a better, healthier quality of life, CRS works with the leadership of each village to determine its basic needs. The programs to meet those needs are then planned, organized and implemented by the villagers with the support of CRS. “It becomes their own development project. CRS oversees,” says Wheeler.

One program, Eppics, involved building more health care facilities with adjacent boreholes to provide clean water for midwives to use during deliveries. Another project involved teaching new mothers to nurse their infants rather than feed them tainted water from overused supplies. These areas have seen a dramatic decline in infant mortality with the implementation of these initiatives.

The delegation team witnessed a reenactment of a motorized cart driven to carry an expectant mother to a nearby health facility. “Before they had the carts, they would put these women on the front of a bike or carry her in (to a health facility),” says Schiffli, adding that the roads were simply rutted and obscure trails. These community carts are another successful addition to the higher quality of life these villagers now enjoy.

Another remarkable program, I-shine, works to bring sanitation to these remote villages. “In one village we visited, the health of the people was better within three months into having latrines,” says Schiffli.

The trip, Schiffli says, has broadened his appreciation of the work CRS does across the globe. “I was so impressed with how these programs change lives. … The size and its success give me a greater appreciation for the organization. I was moved to help,” he says passionately.

In the coming 2014-2015 academic year CRS will focus on food security for the communities they serve, and as Schiffli and Wheeler present their experience to the Bishop Dwenger community they plan to incorporate the theme of food security in school lessons and events.

With Bishop Dwenger’s action plan in the initial stages, Schiffli and Wheeler are enthusiastic about their challenge. “I want to instill passion in our kids. I want to help. Our school has much potential to help,” says Schiffli, who hopes to involve the parents as well.

Wheeler says, “I hope the kids learn and experience enough to make this part of what they do. … Fundraising is important but an internal change is needed.”

“It’s academic, intellectual and spiritual. There are so many venues, something for everyone. We can empower these kids. … A transformation of mind and heart will take place,” Schiffli says.

The two hope to actively participate in fair trade with coffee houses after school, form a student social justice club with emphasis on CRS initiatives and have CRS initiatives in all four Catholic high schools in the future.

“People are people wherever you go. … We want to build a sense of solidarity in our community — which leads to action,” says Schiffli.