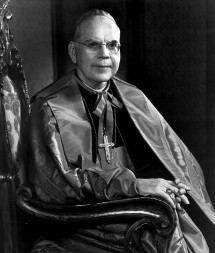 Cardinal Terence Cooke of New York is pictured in an undated file photo. He served as archbishop of New York from 1968 until his death in 1983.

SOUTH BEND — In 1980, the late Cardinal Terence Cooke of New York founded a ministry that sought to reach out to individuals in the Church who experienced same-sex attraction (SSA).

Given the social climate of the day, Cooke saw the need for a truly Catholic apostolate that would offer support and formation for men and women seeking to live according to the Church’s teachings on chastity and to grow in faith and virtue.

The Courage Apostolate was born out of response to this concern. Under the guidance of Cardinal Cooke and Father Benedict Groeschel, Father John Harvey of the Oblates of St. Francis de Sales was invited to serve as director of the apostolate and to lead the first Courage meetings in the Archdiocese of New York.

Courage soon spread by word-of-mouth as well as annual conferences and has grown to include over 100 chapters in about half of the dioceses in the United States. It is also present internationally in more than a dozen countries.

In 2000, the Courage Apostolate came to South Bend under the leadership of Dr. Philip Sutton, a licensed clinical psychologist with a doctorate in marriage and family therapy.

Sutton had been introduced to Courage during his years as founding director of the Graduate Counseling Program at Franciscan University of Steubenville. During the 1990s he encountered the writings of Father Groeschel on the integration of psychology and spirituality, and grew increasingly interested in how early child-parent relationships affect human development, particularly as it pertains to SSA.

Sutton met with Fred Everett, director of the Office of Family Life for the diocese, after a talk given by Father Harvey at Notre Dame in the late 1990s, and they began to discuss the possibility of starting a local Courage chapter.

“It fit into so many of the things that I was already interested in and concerned about,” Sutton says.

In 1999, Sutton attended a Courage summer conference in Washington, D.C. By early spring of 2000, planning for a South Bend chapter was well underway and regular meetings have been held ever since.

Courage meetings are structured around the five goals of the apostolate, which are 1) chastity in accordance with the Church’s teaching on homosexuality; 2) prayer and dedication to Christ, especially in the sacraments;
3) fellowship;
4) mutual support through mature friendship; and
5) good example.

Sutton says that “what might be called a ‘change of orientation’” is not a goal of Courage, but rather the ongoing pursuit of holiness and a “growing into” the life of virtue.

This approach stems, Sutton says, from the assumption that there is a difference between how an individual might feel or act and who they are as a person. Courage seeks to celebrate the core identity of each person “as God’s creature, made in His likeness and recreated in Christ as a son or daughter.”

Sutton says this fact of Christian anthropology has been particularly freeing to many members of Courage over the years who have felt encumbered by the wider culture’s labels of sexual identity.

In the meetings, members are encouraged to share their experiences and struggles in a spirit of trust and confidentiality. While each meeting also includes a brief presentation on a particular aspect of Church teaching or the goals of Courage, Sutton says that the time for personal sharing has been key.

“There is something about both group support and faith that helps people overcome unwanted habits,” he says, an insight that is informed by his own participation in faith sharing groups over the years.

While a few women have attended Courage meetings over the years, in South Bend the members have been primarily men.

Even as the formal leader of group, Sutton says he views his role as that of an elder brother. “What I always tell the guys is, ‘when I’m here, I’m a brother in Christ.’”

The presence of a chaplain has been another important aspect of Courage’s ministry of fraternal support.

Members are encouraged to seek spiritual direction and to avail themselves of the sacraments in addition to attending monthly meetings. Various priests of the diocese have been associated with Courage at different points, celebrating Mass periodically and offering opportunities for Confession.

Sutton says that a number of members have had wounded relationships with their fathers, and believes that the paternal presence of a priest is an important element for their growth and healing.

It’s clear, he says, that “the guys benefited when a priest was more actively involved. That experience of spiritual paternity on the part of the Church was really important.”

As of this month, Sutton passes the torch to Holy Cross Father Kevin Russeau, pastor of St. Joseph Parish, whom Bishop Rhoades has asked to assume diocesan leadership of the apostolate in South Bend. Both the Fort Wayne and South Bend chapters of this diocesan ministry are under the supervision of Fred Everett, assistant to the Bishop and director of the Office of Family Life.

Sutton is grateful for this transition, which he believes will demonstrate in an even clearer way to those who struggle with SSA that they are loved and welcomed by the Church.

Over his 14 years of service in the Courage Apostolate, Sutton says that he has enjoyed walking alongside the members in a common pursuit of chastity and holiness. Though particular life issues may vary, companionship for the journey is something all people need for the life of faith, he says.

“Wherever we struggle to be virtuous, we all need that support.”