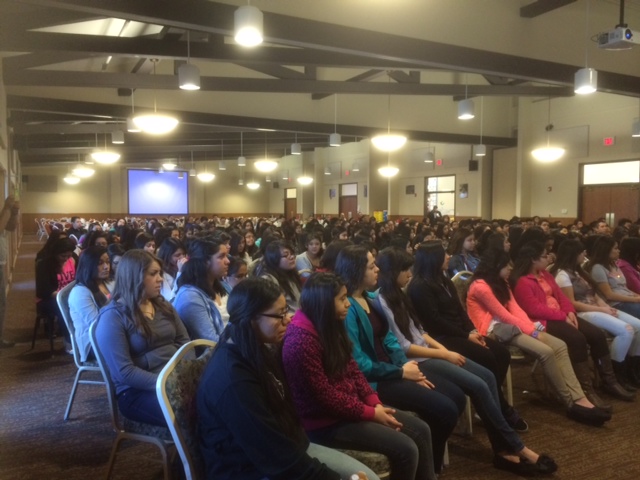 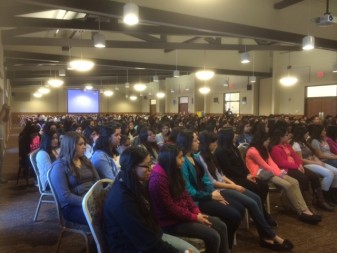 Pictured are the Hispanic youth attending the closing Mass at the Youth Walking with Christ retreat held at Camp Mack on March 28-30.

MILFORD — A powerful bilingual youth retreat, titled “Youth Walking with Christ,” hosted by the Hispanic Ministry of the Diocese of Fort Wayne-South Bend took place at Camp Mack the weekend of March 29-30. Over 250 Hispanic youth from around the diocese attended.

The weekend began on Friday with Mass and a session led by Father Agustino Torres, a Franciscan Friar of the Renewal priest, who provided a religious figure for the youth in attendance.

Saturday, March 29, sessions on themes relevant to current day issues were addressed including family values, abortion, homosexuality, media and dressing in moderation. And more than a dozen diocesan priests with Hispanic Ministry parishes participated in the Reconciliation services making the sacrament of Confession available for the youth.

An informative lecture for parents about the themes covered with their children, and an exhortation to verbally tell their children how much they are loved was shared by Father Torres as well.

Denise, one of the “Corazon Puro” missionaries, also spoke to the parents about the importance of giving their children more quality time. She shared her personal experience of how an excessive amount of time on computer games brought her 12-year-old son to a nervous breakdown — bringing family life to a renewal through counselors and “real” time between parent and son.

Sunday, March 30, had the youth role-playing the various themes of the weekend. The closing Mass, celebrated by Father Torres, was packed with parents, grandparents, siblings and several diocesan community leaders. During the Mass, a family healing prayer was presented by Father Torres to those in attendance during which the children asked their parents for forgiveness and the parents asked their children for forgiveness in return.

Following the Mass the youth were invited to give testimonies. Many shared how the retreat had touched their hearts. One youth asked his girlfriend for forgiveness for not respecting her in the past and vowed to respect her with the dignity a princess of God deserves.

Pure Hearts “Corazones Puros” missionaries and their priest were filled with hope, informing those in attendance, “The Fort Wayne-South Bend youth are an example for the youth on the East Coast of the United States” where their headquarters are located. Enid Roman, director of Hispanic Ministry of the Diocese of Fort Wayne-South Bend, appreciated the over 29 chaperones who willingly gave their time to the youth throughout the weekend.