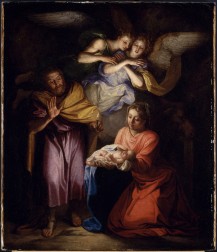 “The Nativity” by French painter Noel Coypel features Mary, Joseph and angels in adoration of the Christ Child.

As we contemplate the love of God in the Incarnation, I invite you to reflect on the famous account of the first Christmas as described in the second chapter of the Gospel of Saint Luke, the passage read at Christmas midnight Mass. In that account, we read about Mary and Joseph traveling from Nazareth to Bethlehem where “there was no room for them in the inn.” We read about Mary giving birth to Jesus, and then about the appearance of the angels to the shepherds with the “good news of great joy… For today in the city of David a savior has been born for you who is Christ and Lord.” Continuing with the reading of Saint Luke’s Gospel, in the passage read at the Christmas Mass at Dawn, we read about the shepherds going to see “the infant lying in the manger” and their “glorifying and praising God for all they had heard and seen.”

In this Christmas column, I’d like to reflect on these witnesses of the first Christmas: Mary, Joseph and the shepherds. When we prepare our Christmas crèches, we place figures of these persons around the infant Jesus in the manger, along with an angel, the wise men, and often figures of sheep, donkey and ox. This tradition of the Christmas crèche originated with Saint Francis of Assisi who created a live nativity scene in the town of Greccio, Italy, a few years prior to his death.

In contemplating Christmas, we recall the journey of Joseph and Mary to Bethlehem for the census. The journey must not have been easy for Mary since she was nine months pregnant. We can only imagine the hardship of that journey as well as the hardship Mary and Joseph experienced when they were told that there was no room for them in the inn. Mary gave birth to Jesus, the Son of God, in the most humble and poor circumstances: in a manger, a place where animals ate.

Despite the difficult circumstances, what joy and wonder our Blessed Mother must have experienced in giving birth to the Redeemer of the world! At the Annunciation, Mary had expressed her complete willingness to cooperate in God’s plan when she said “let it be done to me according to your word.” Saint Augustine, a great bishop and doctor of the Church, praised Mary’s faith and obedience when he wrote that our Lady “conceived Christ in her heart before she conceived him in her womb.”

After the departure of the shepherds, Saint Luke tells us that “Mary kept all these things, reflecting on them in her heart.” As we celebrate Christmas, Mary is an example to us of faith and humility, and also of receiving the Son of God into our lives and of treasuring the mystery of the Incarnation in our hearts. Through prayer and contemplation, we are better able to enter into the mystery we celebrate at Christmas, the mystery of salvation, following the example of the Mother of the Savior.

In contemplating Christmas, it is good to reflect on the husband of Mary, the foster father of Our Lord. Blessed John Paul II referred to Saint Joseph as “the first guardian,” together with Mary, of the mystery of the Incarnation and Redemption. Like Mary, Joseph is exemplary in his faith and obedience. After the angel’s announcement to him in a dream, Joseph “did as the angel of the Lord commanded him and took Mary as his wife.”

Saint Joseph was the guardian of the Holy Family, including on that journey from Nazareth to Bethlehem. He was an eyewitness to the birth of Jesus. Later, at the circumcision, Joseph named the child “Jesus,” thus proclaiming the mission of the newborn child as Savior, since the name “Jesus” means “the one who saves.”

As Mary contemplated the event of the first Christmas in her heart, we can imagine that Joseph did the same. Saint Joseph surrendered his whole life to the care of Jesus and Mary. Very early on, when Jesus’ life was threatened by King Herod at the massacre of the Holy Innocents, Saint Joseph protected Jesus when he took him and Mary and fled into Egypt.

Saint Joseph is the patron of the Catholic Church. Pope Leo XIII wrote: “It is … fitting and most worthy of Joseph’s dignity that, in the same way that he once kept unceasing holy watch over the family of Nazareth, so now does he protect and defend with his heavenly patronage the Church of Christ.” God entrusted the beginnings of our redemption to the faithful care of Saint Joseph. We ask Saint Joseph to help us to imitate his faithfulness and purity of heart.

It is not incidental that God chose shepherds, the lowly and unrefined, as the first to receive the good news of the Savior’s birth. They were struck with great fear when the angel of the Lord appeared to them. Immediately, the angel told them to fear not and proclaimed to them “the good news of great joy” of Jesus’ birth. They then went in haste to adore the infant Jesus.

The shepherds remind us of God’s merciful love, which is especially shown toward the poor and humble. The shepherds are an example for us since they responded enthusiastically and immediately to the angel’s invitation. They are also an example for us of our mission of evangelization. Saint Luke tells us that after adoring the infant Jesus, they returned “glorifying and praising God for all they had heard and seen.”

As we celebrate the Nativity of Our Lord, let us pray for one another that we may follow the example of Mary, Joseph and the shepherds. You, the faithful of our diocese, will be remembered in my prayers in a special way throughout the Christmas season. May you and your families and friends have a blessed and merry Christmas!

I end this column with a prayer for Christmas Eve, actually an invitation to prayer, composed by Pope Benedict XVI:

Let us ask the Lord to grant us the grace of looking upon the crib this night with the simplicity of the shepherds, so as to receive the joy with which they returned home (cf. Luke 2:20). Let us ask Him to give us the humility and the faith with which Saint Joseph looked upon the child that Mary had conceived by the Holy Spirit. Let us ask the Lord to let us look upon Him with that same love with which Mary saw Him. And let us pray that in this way the light that the shepherds saw will shine upon us too, and that what the angels sang that night will be accomplished throughout the world: “Glory to God in the highest, and on earth peace among men with whom He is pleased.”Amen!