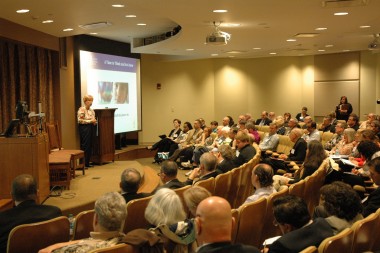 Sheila Gilbert, president of the National Council Society of St. Vincent de Paul, speaks about poverty at the Indiana Catholic Poverty Summit on Friday, April 26, at the University of Notre Dame. Gilbert was one of the national speakers, as well as Father Larry Snyder of Catholic Charities USA, who spoke about issues of poverty in the U.S. and Indiana.

NOTRE DAME — The Indiana Catholic Poverty Summit, sponsored and hosted by the University of Notre Dame’s Center for Social Concerns, brought together all five Indiana Catholic bishops and representatives from Catholic institutions across the state to discuss some of the causes and symptoms of poverty, and how the Catholic organizations of Indiana can form a framework together to reduce poverty in Indiana.

Bill Purcell, associate director of the Center of Social Concerns served as the master of ceremonies and welcomed the large group to Notre Dame on April 26 and promised an “exciting and challenging day.”

Bishop Kevin C. Rhoades served as host and spoke on the importance of the group’s mission. “As disciples of Jesus Christ, we are called to have a spirit of concern and love for the poor. We must see the living Christ in every person, and live the principle of human dignity. This summit will give a renewed commitment to this mission.”

The summit was inspired by Catholic Charities national “Campaign to Reduce Poverty in America” and the new initiative by the United States Conference of Catholic Bishops called “Poverty USA.” Each diocese has its own Catholic Charities chapter, and all directors were in attendance.

David Siler, executive director of the Indianapolis branch was instrumental in putting the summit together. He told the crowd a story about the opening of a shelter in Bedford: “We were really proud of our efforts and it is humbling to serve so many people, but I started thinking to myself that I’d like to stop serving so many people. I thought, wouldn’t it be nice to have to close the doors because we had no one left to serve.”

The staff of the Indianapolis office envisioned the conference as an opportunity to bring the various charities together to work towards their goals.

“We all do amazing things, but our organizations are disconnected. We need to talk more, collaborate and lead the way. If we do this, we can truly make a difference to reduce poverty in our state,” Siler said.

In addition to representatives from across the state, several national leaders were also in attendance. The president of Catholic Charities USA, Father Larry Snyder, updated the group on the latest poverty statistics.

“Over 46 million Americans live in poverty, over 15 percent of the population,” Father Snyder said, “that is one in every five children across our country.”

In Indiana, Father Snyder noted that closer to 20 percent of Hoosiers live in poverty. He commented on businesses that prey on the poor, which he called the “poverty pimps,” including payday loan businesses, pawnshops and slumlords.

“These businesses only perpetuate the poverty cycle,” Father Snyder said. He also spoke about some of the initiatives Catholic Charities USA has implemented, including working with businesses on market-based components and a focus on outcomes versus how many people are currently being served.

“We need to become a results based organization with program evaluation and accountability, we need to do better” concluded Snyder.

Shelia Gilbert, president of National Council of the Society of St. Vincent de Paul also addressed the crowd. She spoke about engaging more parishioners in serving the poor. “The Catholic Church by itself cannot end poverty, but we can be a catalyst for our communities to make a real difference in people’s lives,” Gilbert said.

She also commented about a lack of hope felt by some of the people that St. Vincent de Paul serves. “There is often a lack of belief that the future can be any better,” Gilbert said. “We must spread hope and help them make the journey out of poverty.”

Active service to the poor was a major theme of the day. Creating a culture of giving within parishes and schools is vital to the mission of ending poverty. The Catholic high schools are already working toward several statewide goals for student service to their communities. According to Harry Plummer, the executive director Secretariat for Catholic Education and Faith Formation for the Archdiocese of Indianapolis, “Catholic schools are moving together on an accreditation model for all schools. We want to put in place a service standard that will really help our communities and also help our students answer the social call of the Eucharist.”

After meeting together in the morning, the group divided up by dioceses to talk about specific concerns and create possible solutions for better collaborations between the statewide agencies to address the poverty problem.

Bishop Rhoades led the delegation from the Diocese of Fort Wayne-South Bend. He noted the poverty statistics in South Bend were “higher than I expected.” He talked about his experience serving in a poor parish in Harrisburg, Pa.

“We served up to 250 people a day,” Bishop Rhoades said. “We helped many of the children get into neighboring Catholic schools. While the kids did better in the Catholic school, so many of their issues stemmed from the atmosphere at home. It was disheartening. Poverty contributes to so many other issues and unless we deal with the root of the poverty, we will never be able to help.”

Schools can be a place of understanding and action in dealing with poverty.

Principal Mary Keefer of Bishop Luers High School in Fort Wayne commented, “You know we often host dress down days when our kids get to wear regular clothes for a dollar. We then donate those funds to charity. But what if we hosted dress down days for giving of one’s self? Is it service if we make the kids do it? Sometimes teenagers have to be led and this might be a great way to encourage them to donate more of their time.”

Melissa Wheeler, diocesan director of Catholic Relief Services for the Diocese of Fort Wayne-South Bend and theology teacher at Bishop Dwenger High School in Fort Wayne, agreed and discussed how many teenagers need a better understanding of Catholic teachings on human dignity.

“As a Church,” Wheeler said, “we have done a great job in helping kids understand the dignity of the baby in the womb. But they don’t have the same understanding of dignity for others who are different from themselves, such as prisoners or the poor.”

The conference concluded with all the diocesan groups meeting together again to discuss potential ways for collaboration and to draw some conclusions about the day.

“I know we are more united and connected now than when we came in,” said Mickey Lentz, chancellor of the Archdiocese of Indianapolis. “Short-term we need to capitalize on some of the ideas shared today and regroup again to revisit and explore further ideas and concepts. This has been a great learning day for all of us,” she concluded.

Indianapolis Archbishop Joseph W. Tobin said, “I suspect that what brought people here today was the excitement of what it could mean if all five dioceses were working together, connected by the essentials of our Catholic teachings and united in our mission to serve the poor. I believe what we found was the deep feeling of connection between these people of faith and a renewed sense of urgency to implement new solutions to an old problem.”

The ideas generated by the summit will determine the next steps. Each of the attendees will receive a follow up report highlighting the discussions and possible solutions. The hope of the organizers is that the Indiana Catholic Conference and the Indiana bishops will take the ideas of the conference and create new initiatives statewide to help end poverty in the state.