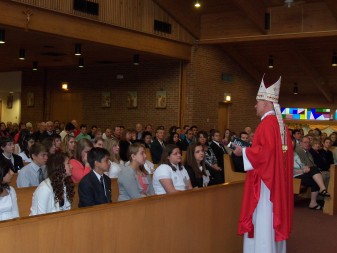 BRISTOL — They studied and prepared for two years — doing special projects, logging service hours — and all their work culminated in the blessing of the sacrament of Confirmation Saturday, April 13, at St. Mary of the Annunciation Church in Bristol.

Bishop Kevin C. Rhoades confirmed 37 candidates in all — 35 young people and two adults. As they practiced the night before, parents and students alike looked at this sacrament as a “rite of passage on their spiritual journey.”

Mike and Sara Jackowiak’s son Ryan was one of the candidates. When asked what it meant to them as parents, Mike replied, “It means he’s getting older and taking on the responsibility of full membership in the Church. He now has a better maturity and better idea of what’s expected of him and about what it means to be Catholic.”

The family members have been parishioners at St. Mary’s for approximately six years. Ryan is their second child to be confirmed. Mike was raised Catholic and Sara joined the Church. Sara said having two children go through the Confirmation program reinforced the things she learned in RCIA.

“As a family it’s made us all stronger Catholics,” Sara said. 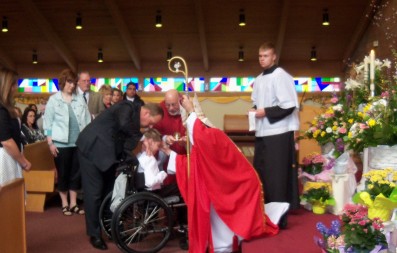 A couple of the girls being confirmed, Mackenzie Kauffman and Raven Knepp, felt the sacrament would bring them closer to God.

“It’s an important thing to do to be a part of the Church and be more with God,” Mackenzie declared.

Raven said being confirmed meant, “I get to follow my faith more and know that now I’m really a part of the Catholic faith and follow in the Lord’s footsteps to be closer to God.”

One candidate, Johnny Riblet, was excited about being confirmed and about meeting the bishop. His sponsor, Dan Oakley, has known Johnny all his life and said, “This is a big milestone for him — being blessed by the Holy Spirit. Things are more challenging for him so this is a big step for him to be able to participate with his class.”

Johnny’s father, Jay Riblet, explained Johnny has cerebral palsy with global brain injury and he really enjoys going to religious education classes. Riblet said Johnny’s been involved in his faith since he was a small child. When he made his first Communion he said, “You probably won’t find someone who enjoys Sunday school as much as Johnny. Being able to participate with his class is a big deal.”

Teaching the students was Tony Finch, who taught seventh grade and is also a sponsor, and Deb Lytell, who has been a religious education teacher for 29 years, the last five in eighth grade preparing the students for Confirmation. Eleven students were recognized with a Holy Spirit pendant for completing every assignment and project on time and attending everything asked of them.

Lytell said, “They are all a great group of kids. We had a few others that were real close to turning everything in.” She said she felt the kids did understand the importance of the sacrament they were about to receive.

Their pastor Father Bob Van Kempen agreed. “Receiving the sacrament at this age really helps the young people to grow in their faith and be strengthened as Catholics as they do everything they need to do to prepare.” 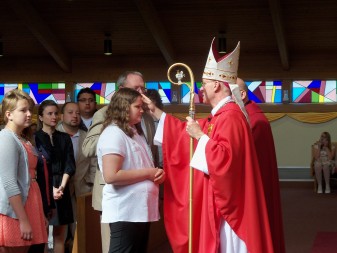 Father Van Kempen said the students are asked to do service projects, keep prayer journals and lots of studies to get them ready.

“It’s nice that the bishop comes and administers the sacrament. It exposes them to the wonder and awe of the Catholic Church being in his presence; they don’t get that chance that often,” he said.

As the choir and congregation finished singing the opening hymn, Bishop Rhoades said, “Come Holy Ghost, that is our prayer this morning as we are here to support these young people. What a beautiful day in their lives as they receive the Holy Spirit and an increase in faith.”

He told the congregation he always enjoys coming to St. Mary’s, “But especially today — to be here with these young people and administer the sacrament of the Holy Spirit and I pray they always live by the Holy Spirit.”

As their pastor and their teacher presented the group of candidates, Bishop Rhoades asked questions about the three sacraments of initiation, seven gifts of the Holy Spirit and 12 fruits of the Holy Spirit. When one student rattled off the answer of the seven gifts, Bishop Rhoades told a story of how impressed he was in the past at another parish when a student did the same — until he turned around and saw banners hanging listing the seven gifts.

“Some people think Confirmation is the end, but it’s the exact opposite — it’s the beginning! It’s important to continue to study and learn your faith,” he said.

He advised that aside from having a Bible, every Catholic home should have a copy of the Catechism of the Catholic Church. He said the catechism has four parts that explain the creed, how Catholics celebrate the faith, and how they live by faith and prayer life. 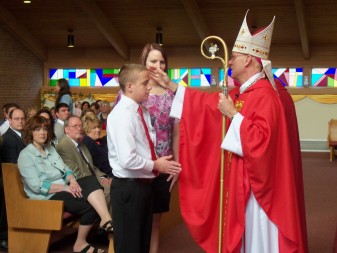 “It’s not enough to know and celebrate our faith. We also have to live it. The Holy Spirit helps us to do that,” Bishop Rhoades said.

He told the candidates if someone asks them a question about Catholicism they can’t answer, they should go home and look it up in the catechism. And he said one of the important gifts of the Spirit is fortitude, which gives courage.

“We need courageous Catholics today, standing up for the sanctity of life and of marriage,” he said.

And he told them that in today’s society that’s not easy. “But the great thing is now you’re going to have the help of the Holy Spirit to fight peer pressure.”

Bishop Rhoades told them God didn’t give the Ten Commandments to make lives difficult. He wanted His people to have joy and the bishop said following Christ and being Catholic should bring inner joy.

“As you receive the seven gifts of the Holy Spirit I pray that you truly strive to live by the Spirit everyday as well as the extra grace received in the Eucharist. When you stay active in the faith, share and defend the faith, you will know the wonderful fruits of the Spirit,” Bishop Rhoades said.

After Mass, everyone was invited to share in a celebratory brunch in Annunciation Hall and have photos taken with Bishop Rhoades.