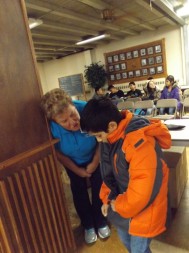 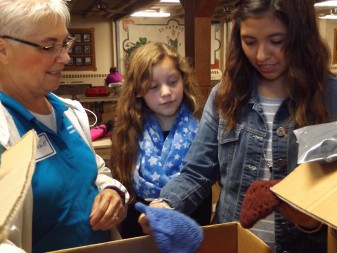 The Christ Child Society of Fort Wayne traveled a few miles north on Sunday, to distribute approximately 300 coats to the children of St. Patrick’s Parish in Ligonier.

Eighteen to 20 women from the society made the trip and were on hand in Ligonier from 9 a.m. to 3 p.m. to hand out the brand new coats, which are purchased at a considerable discount from a supplier in New York, according to Coat Committee Chairwoman Janet Didier.

In addition to the coats, the children were also offered new hats and gloves that have been donated to the society. Some were sewn by the Christ Child Society Sewing Committee, while others were made by a group called the ‘knit chicks’ in Roanoke.

During the event, St. Patrick’s parishioners were also offered free flu shots by the Stellhorn-Maplecrest Walgreen’s in Fort Wayne. Kim Sexton of Walgreens explained the store became involved because of a relationship it has with the Didiers’—Walgreens conducted a flu clinic for employees at their business — and said the store was “more than happy to come up” when he learned of the coat giveaway.

Janet Didier, chairwoman of the Christ Child Society of Fort Wayne’s coat committee, helped 9-year old Jesus Ruvalcaba of St. Patrick’s in Ligonier try on a new coat Sunday. The Christ Child Society decided to expand its outreach to Ligonier this fall. Aside from new coats, the children could also get a new hat and gloves and a flu shot from Walgreens.

In Fort Wayne, the Christ Child Society hands out coats on each of the four or five Wednesdays in October, with over 40 volunteers assisting “Last year we distributed over 2,300 brand new coats, hats and gloves,” Didier said. “We just show the face of Christ to them.” Didier added that the members who traveled to Ligonier were “so excited to be doing this.”