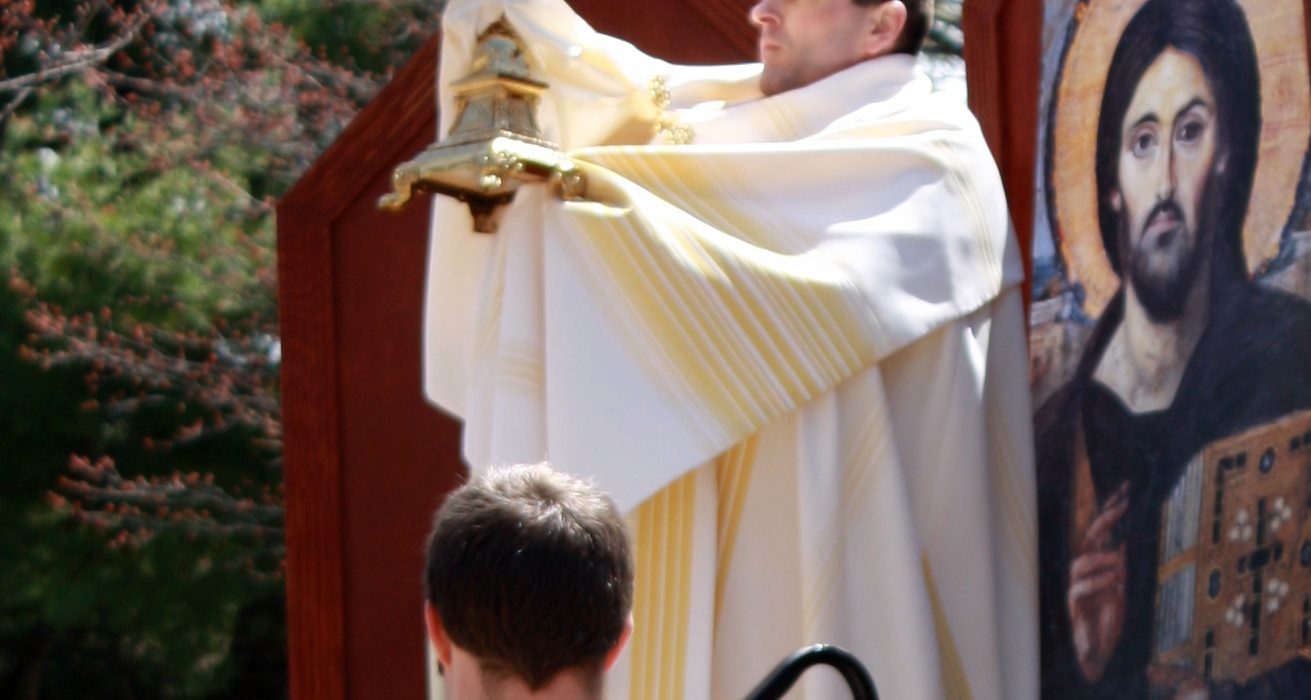 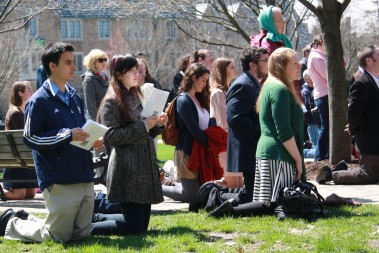 NOTRE DAME — A seed planted nearly a decade ago, nourished by devotion to the Blessed Mother, continues to bear fruit at the University of Notre Dame and beyond.

Children of Mary, a student-run group devoted to praying the rosary, was inspired to organize the first campus-wide Eucharistic Procession at the University of Notre Dame. This April 21marked the event’s ninth year as a brilliant sun greeted the faithful who gathered outside the Basilica of the Sacred Heart. A few hundred people of all ages and from parishes near and far took part in the procession, praying and singing as Holy Cross priests took turns lifting the Blessed Sacrament for all to adore.

Two Notre Dame alums scheduled a visit back to campus in order to participate in the Eucharistic Procession. Mary Tarsha is from San Antonio, Texas, and Father Derek Van Daniker serves in the Diocese of Lexington, Ky. Both are former members of Children of Mary and said the humble act of praying the rosary daily has produced tremendous grace in their lives.

As a college student, Father Van Daniker served as the group’s president from 1999-2001.

“Some students wanted to start praying the rosary together,” explained Father Van Daniker, reflecting on how Children of Mary began in the early 1990s after fellow student David Wade was inspired by the messages of Medjugorje and Our Lady’s call to prayer and conversion.  “They started in Zahm Hall, a residence hall in the middle of campus and very centrally located. They gathered very simply to pray the Prayer of our Church to Our Lady and that led to a little community of prayer that continues today. I was here a few years after it began, kind of the hey-day of its time, and it grew to a group of about 20-30 gathering every night to pray the rosary and go to Mass,” he said. 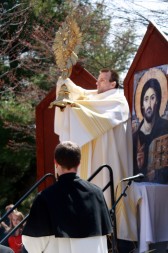 Tarsha, who also served as president of the campus chapter of the Knights of the Immaculata, a group closely affiliated with Children of Mary, smiled as she explained the power of simple prayer.

“The fruit of it was incredible,” said Tarsha, who attended medical school after graduating from Notre Dame in 2003. “We just came together to pray, and when you come together to pray in front of the Blessed Sacrament a tremendous unity and community is formed. We have lasting friendships and there was so much joy.”

Father Van Daniker said many religious vocations, including his own, were born from the time spent praying the rosary in college and reports at least a dozen priests and some religious sisters are counted among the Children of Mary alumni.

“Steve Titus was a chemistry major and was studying with a fellow chemistry major,” explained Father Van Daniker, recalling a classmate of his: “He would kind of sneak out … he excused himself from studying around 10 o’clock and come back around 11 or 11:30. One of these times she asked, ‘Where have you been?’ ‘Well, I went and prayed the rosary and went to Mass.’ She was like ‘Oh, really?’ So he invited her to come. She’s now Sister Marie Colette Goetz, a Poor Clare nun in the Archdiocese of Chicago!”

Titus himself entered the seminary and is now Father Steve Titus, serving as the parochial administrator at St. James Catholic Church in Douglas, Wyo. He credited classmate Tim Monahan, leader of the Children of Mary at the time, as a strong influence on the vocations of many. Now Father Tim Monahan, he entered the seminary right out of college and showed his peers how to give their whole lives to God and the Church.

“I think I can speak for Sister Colette and myself in saying Mary interceded for us during those years at Notre Dame and enabled us to move without fear to answer God’s call spoken in the depths of our hearts,” reported Father Titus. “The support and true communion of Children of Mary fostered our faith and vocation.”

Tarsha said she is happy to be a stay-at-home mom to seven-year-old Mary Faustina and three-year-old John Paul. She quotes another John Paul when asked how Children of Mary affected her vocation to motherhood.

“Pope John Paul II said in ‘Love and Responsibility’ that education is the continual formation of the personality of the person,” Tarsha explained. “And without a doubt it was an incredible education formation. Notre Dame provided intellectual formation but it was really through Children of Mary that we received such an interior formation by praying the rosary, Adoration and love for the Mass. For me, that was life.”

During her years in medical school, Tarsha said she remembered being incredibly exhausted after spending hours with cadavers in anatomy lab, but determined that nothing would keep her from going to Mass. She said she drew upon the faith cultivated during her college years.

“As a mother now it’s really strengthened me in teaching my children this is the source of love,” she continued, referring to Mass. “In praying the rosary as family, there’s so much grace that comes that we’re not even aware of.”

Founded by a small group of dedicated students, the annual Eucharistic Procession is now hosted by the University of Notre Dame Office of Campus Ministry. Beyond a campus event, the procession attracts people from all over the Diocese of Fort Wayne-South Bend.

The Children of Mary continues as a student group today, its members dedicated to prayer, social and service activities.