“One can pay back the loan of gold, but one dies forever in debt to those who are kind.” 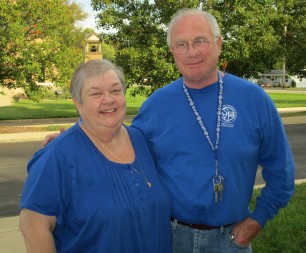 If this proverb is to be believed, many area folks will be forever in debt to the kindness of Waynedale residents Cheryl and Mike Mowan. Parishioners of St. Therese Catholic Church, both volunteers began a life of service during their childhoods and have passed that love of helping on to their own children, Mark (Carrie) Mowan and Anne Mowan Bauer, and their six grandchildren.

“My parents were always very involved in church activities and groups while I was growing up,” said Anne. “When they retired, they switched goals and became very dedicated volunteers with the St. Vincent de Paul Society.

“Their volunteer work seemed to mimic full-time employment,” she continued. “Often, between the different church groups they belong to and the St. Vincent de Paul Society, they end up having two or three meetings at their house each week. They’ve always had a special knack for hospitality, and always try to think of anything their guests might need. Once, when I was in college, I had a friend over and my dad was very solicitous, wanting to make my guest feel at home. He ended up making lasagna late in the evening!”

Mike and Cheryl graduated from St. Francis College, now the University of Saint Francis. Cheryl, who has a Bachelor of Arts degree in family arts, almost completed a master’s degree in theology at the University of Dayton, “but life got in the way. However, I have used the education well throughout my years of ministry at St. Therese.” After briefly teaching in the parochial schools, she began working at St. Therese as the parish secretary, bookkeeper and later, minister of services.

“I started as the priests’ cook and housekeeper — a job I thoroughly enjoyed — but quickly moved into the secretary/bookkeeper’s position when that employee quit,” said Cheryl. “I also had to prepare the weekly bulletin. When Sister Ann Matilda, SP, left the parish and wasn’t replaced for several years, I gradually assumed more and more of her pastoral associate responsibilities.”

She had been interacting with the poor who came to the parish for help, lining them up with the local St. Vincent de Paul Society, when the then-all male organization asked her to become a member. She continued to do initial interviews with those who needed assistance and worked with the SVdP men to help them with food, finances, utilities, clothing, appliances and other needs. She is entering her 28th year as a Vincentian and received an award for completing six years of service as Fort Wayne District Council president.

“Vincentians are the most wonderful people. The workshops are excellent and so are the speakers, but it’s the people who make the experience great,” said Cheryl. She and Mike each won a SVdP Top Hat Award for Outstanding Vincentians, separately and at different times. In addition, Cheryl was honored with a Distinguished Catholic Women certificate from the Diocesan Council of Catholic Women. 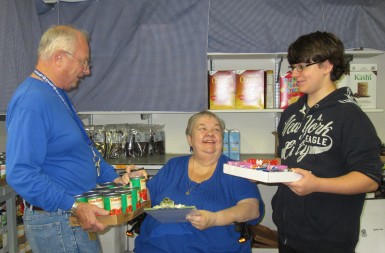 The Mowans share a laugh with grandson Colin Bauer, 12, as they take inventory while preparing cans of food for St. Therese Food Pantry clients.

Mike served on the St. Therese School Board, was Cubmaster for the school’s Cub Scouts group and a member of the Boy Scout Committee. He served for several years with the Christ Renews His Parish movement and volunteered for 35 years with the parish’s Fall Festival. For 40 years he has been an extraordinary minister of the Eucharist. He has been a Vincentian for 18 years, an SVdP Care Van driver for nine years, a catechist and host with St. Therese’s Rite of Christian Initiation of Adults, a member of an ongoing Arise group that meets monthly at their home and co-president, with Cheryl, of the SVdP conference at St. Therese, for 15 years. He is currently a member of the Knights of Columbus.

“Cheryl and Mike are two of the most thoughtful people I know,” said Donna Carteaux, a widow who lost her husband in 2012. “They took me to brunch after my husband’s death and that was very comforting. Whenever I see them, what was to be a five-minute visit ends up an hour, running the gamut of serious business to peals of laughter. God bless them.”

Cheryl has served on the parish Pastoral Council and the Church Building Committee, co-chaired the Liturgy Committee, volunteered at and chaired the Fall Festival and served as a volunteer youth minister. She was an extraordinary minister of the Eucharist for 30 years and an RCIA catechist for 25 years.

For the last 33 years she has been meeting monthly with her CRHP team for prayer, reflection and friendship. She attended and helped lead a women’s retreat group for more than 20 years. She is part of her Arise group, and also belongs to two spiritual book clubs.

“By example, my parents taught me that the best way to make your way through the world is by being kind and generous to one another and yourself,” said Mark. “It is the one certain way to make the world a better place whether it is in small ways or big — kindness and generosity are the cornerstones of my parents’ lives.”

One such kindness is remembered by Jim Bugert, a longtime family friend.

“I made an art object for a SVdP auction and Cheryl was so kind as to pay $100 for it, and it now hangs on her wall. I think she felt sorry for me, because she talked me into making it and no one bid,” he recalled.

Many other souls have been loved and assisted by the compassionate couple, including Marcie, who entered the couple’s life years ago.

“I first noticed Marcie walking the streets of Waynedale in brightly-colored outfits with her head wrapped in a color-coordinated scarf, like a turban,” said Cheryl. “People could hear her talking to herself as she walked. Some were afraid of her — she was so different. She began to stop at our parish office where I worked, and I soon discovered she wasn’t there to ask for monetary help; she just wanted someone to listen to her. Like many others who stopped by, we became friends.

“I learned her mental disability was the result of a severe auto accident years before. When she needed something our SVdP group could provide, we took care of her. … Years later, when she became ill, I took her to the doctor who diagnosed her with advanced lung cancer. That turned into several months of taking her to chemotherapy for hours at a time, enjoying her company and admiring her courage. When she became too ill to stay in her apartment, Mike and I moved her into a nursing home and visited her regularly.” Marcie converted to Catholicism during the years of their friendship, and Cheryl was honored to be her sponsor.

“I made her funeral arrangements at St. Therese … Our parishioners were so kind to her. At her funeral we met her lovely estranged daughter and we became friends too. I think of Marcie often. You never know how people are going to touch your life.”

Cheryl and Mike will celebrate their 50th wedding anniversary in June. They continue to put others first and to demonstrate, with joy, their deep love for Christ by ministering to His people.