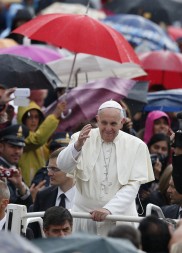 Pope Francis arrives to lead his general audience in St. Peter’s Square at the Vatican Oct. 9. Last month Pope Francis spoke very strongly against gossip at a Mass Sept. 13 at Domus Sanctae Marthae. He said there is no such thing as “innocent gossip.” He spoke of gossip as a “slap” to Jesus and said that “it ruins your soul.”

Every time we pray the Confiteor, we confess that we have greatly sinned, in our thoughts and in our words, in what we have done and in what we have failed to do. I underline “in our words” since this is a species of sin that we may sometimes ignore or minimize. Yet words can cause harm and hurt. In fact, not only is lying a violation of the 8th commandment, an offense against God and neighbor, so is speech that is malicious, slanderous, or hateful.

I write about this topic in this week’s column since it seems that there is a growing lack of civility, not only in public and political discourse and debate, but also among people through blogs and e-mail and other communications. Perhaps the ability to communicate one’s thoughts or sentiments so rapidly has made some say or write things without the proper discernment and thought beforehand. There is a lot of hasty imprudence. I see this even within the Church community, when in anger, people send messages that do not reflect the charity in speech that should be a mark of a disciple of Christ.

It is important for all of us to examine our consciences before going to confession not only regarding sinful actions, but also regarding sinful speech. For example, the sin of rash judgment, assuming as true, without sufficient foundation, the moral fault of a neighbor; the sin of detraction, without objectively valid reason, disclosing another’s faults and failings to persons who did not know them; and the sin of calumny, harming the reputation of others by remarks contrary to the truth (cf. CCC 2477).

Angry and hateful words can harm or destroy the reputation of other people. They can also cause deep hurt to others. Sometimes this can happen even among family members and friends. And it can happen among members of the Church, the family of Christ. Malicious words can be a form of violence against the dignity of others.

Last month, in a homily, Pope Francis spoke very strongly against gossip. He said there is no such thing as “innocent gossip.” He spoke of gossip as a “slap” to Jesus and said that “it ruins your soul.” He went on to say: Those who live judging their neighbor, speaking ill of their neighbor, are hypocrites, because they lack the strength and the courage to look to their own shortcomings. I think Pope Francis is right. We are called to love our neighbors, not talk about them behind their backs, whether true or not. As the Holy Father noted, our tongues are meant to praise God, not to speak negatively about members of his body.

Pope Francis said that there are some who believe that certain persons deserve to be gossiped about, but that is not the case. Rather, he encouraged us to pray and do penance for such persons. We should seek to help others and not tear them down.

We must all learn to speak only with charity. If frustrated or angry at others, we should pray for them instead of harboring resentment. We should still speak to them, and about them, with kindness. We should never seek to tear other people down, but to build them up. Careless and malicious words tear people down. They are a sin against the fifth commandment.

Of course, charity in our words springs from charity in our hearts. If we have a judgmental attitude toward others, rooted in pride, we will be quick to make rash judgments or slander others. Blessed Mother Teresa used to say: “If you take time to judge, you don’t have time to love.” How true these words are. How quick we can be to judge or condemn others, rather than pray for them. How quick we can be to focus on the faults of others rather than our own.

When we are unwilling to forgive others, when we hold grudges and cling to bitterness, our hearts become cold. Our words become bitter. The Lord teaches us to love our enemies and to pray for our persecutors. When we reflect on how often our Lord has forgiven us, we are more inclined to forgive those who trespass against us. The Lord teaches us the Beatitude: “Blessed are the merciful, for they shall obtain mercy.”

The great bishop Saint Augustine had a sign over the table in his episcopal residence where he dined with the priests of his diocese. It said: “If you speak ill of your brother here, you are not welcome at this table.” It is said that Saint Augustine enforced this rule. It is a good rule for all of us. To speak ill of others, to complain or gossip about our neighbor, is a sin against charity.

Let us ask the Lord for the grace to be charitable: in thought, word, and deed. This is the Christian path, the path to holiness.