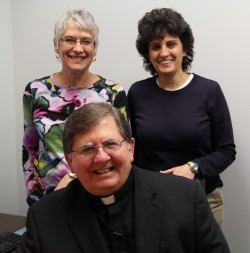 Mary Szymczak, left, who is retiring after 20 years of service in the Vocation Office, poses with Christine Bonahoom-Nix, right, the new administrative assistant and Msgr. Bernard Galic, director of the office.

FORT WAYNE — The Vocation Office of the Diocese of Fort Wayne-South Bend has seen a changing of the guard recently as Mary Szymczak retires after 20 years of faithful service, first as administrative assistant and later as associate director. Christine Bonahoom-Nix took up the challenge in her stead on March 24. Adding to the transition in personnel, the Vocation Office has recently moved from the Blessed John Paul II Center in Mishawaka to the Archbishop Noll Catholic Center in Fort Wayne as well.

The face of the Vocation Office has changed a great deal over the past two decades, with three moves and an increase in seminarians. Szymczak recalls her first encounter 20 years ago with the small office. “We began with eight seminarians when I started,” she says. “We tried to figure out the direction for the office then.”

Currently, Szymczak reports, there are 30 seminarians discerning their vocation at seminary. The increase she notes came about slowly after Pope John Paul II instituted the World Youth Days. “We’ve had five to six enter (the seminary) these past few years,” she says.

Much of her work has been “taking care of the seminarians,” says Szymczak, from the time of application to applying to the seminary and beyond. This jack-of-all-trades not only kept the Vocation Office organized, she also took care of insurance and the office budget, as well as organizing the vocations talks and the rich traditional ordinations to the Priesthood.

Szymczak enjoyed her interaction with the seminarians who she kept supplied with what they needed while nurturing them as a mother would. “I tell them, ‘I’m your mom. You call me if you have a problem.’” And she adds with a smile, “It was like keeping track of 30 sons. …They called me mom.”

“I’ve enjoyed watching them (seminarians) change, grow and develop. I liked being mom. I think of them as my kids. I don’t know that I’ve given them as much as they’ve given me,” she says of her relationship with the young men.

Szymczak also directed the permanent deacon program reinstituted by Bishop John M. D’Arcy in 2007 and felt challenged by these contemporaries who lived their faith so deeply. “I met 12 wonderful couples. And to watch them grow in faith! … I’m so proud of them, as I am of all the seminarians,” she says.

She continues, “I’ve seen 20 priests ordained and 11 deacons. And with the 30 (current) seminarians, I have 61 spiritual sons.”

One her most memorable tasks as associate of the vocation office was visiting the seminaries. “I loved going to visit the seminarians. I enjoyed seeing where they were and meeting the people who taught them,” says Szymczak. And she notes, “The ordinations were always special.”

Msgr. Bernard Galic, director of the vocation office since 1994, says of Szymczak devotion to her work, “If I were to tell you what she does in the office, I’d say one word — everything! That’s why the office has been so organized and so very productive. She’s a take-charge person and doesn’t mind keeping me on time. And I’m grateful for that.”

The two had worked together previously during Msgr. Galic’s appointment as pastor at Holy Family Parish in South Bend. Szymczak was then secretary of the school there. When Msgr. Galic was appointed director of the vocation office he asked Szymczak to come work with him again.

Szymczak and husband David, a retired police officer, have been parishioners of Holy Family Parish for 47 years. They have two grown children and five grandchildren — a close-knit family that spends quality time together, which Szymczak hopes will increase with her retirement.

The Szymczaks have worked a Christmas tree farm for several years on their 15 acres in the rural South Bend area countryside, but she notes that project will be folding soon.

She looks forward to spending more time with her stain glass artwork and has several projects to complete. Earlier work can be seen at Holy Family Parish where she created the stained glass windows of the church as well as several other chapels and churches in the area that reflect her beautiful work.

What is her hope for the vocation office as she hands the baton to Bonahoom-Nix? “I hope it grows. I think it will in Fort Wayne. There’s more outreach that can be done with the office. Christine’s got the background to promote the office more. I think she’ll be great with the guys and with monsignor,” says Szymczak.

As to her retirement Szymczak says, “It’s bittersweet. Everyone asks ‘why?’ I always said I have the best job in the world. But you get to a point when you just know it’s time. — It’s time,” she says. “I have been very blessed. I have met wonderful people over the years. I’ve been inspired more than I ever dreamed. And I had the best boss in the whole world. … It’s been a good 20 years!”

Szymczak was honored with a retirement celebration in South Bend.

Now at the helm

Christine Bonahoom-Nix is excited about her new position as administrative assistant of the Vocation Office. No stranger to diocesan work with work credentials including director of communications from 1990 to 2004, Bonahoom-Nix began organizing her new office at the Archbishop Noll Center on March 24.

Bonahoom-Nix hopes her background in communications will be a “huge plus in being able to speak with the young men and their families who are discerning a call to the Priesthood and those that are finally accepted. … I’ll make sure they know the door is always open,” she says.

Working with Msgr. Bernard Galic, director of the Vocation Office, is a good fit, says Bonahoom-Nix. The two worked together on the TV Mass during her tenure in communications. “It was a huge draw to know I’d be working with Msgr. Galic. I hope we can build on what we have now and that more young men and women will pursue the vocation the Lord is calling them to,” she says.

Bonahoom-Nix and her husband Jerry, are parishioners of St. Jude Parish, Fort Wayne, and have two children. She is grateful for the flexibility of the part-time work at the Vocation Office and will remain available to her children and their activities. “I feel like its all the greater work of the Church, so if I can do all this, that’ll be the best of both worlds,” she says, adding that her family is very supportive of her new position.

Msgr. Galic is pleased with his new assistant and says, “I’m very happy with the fact that she’s coming on board with us. I think she’s up to what the office demands of her. I feel confident that she’s going to relate well with the seminarians. And I’m sure they’re going to like her. … And I expect she’s as take charge a person as Mary (Szymczak) is.”

Bonahoom-Nix concludes, “I’m just excited to be back in Church work and feel it’s where I’m called to be. I’m glad I can still be a mom and do this too.”