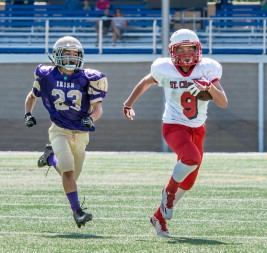 St. Charles tight end Sam Pesa runs for a touchdown after catching a long pass in the first quarter. The passing attack would prove key to the Cardinal’s 40-0 victory over the CC Irish.

Central Catholic showed signs of improvement, but was unable to post a score against the St. Charles defense in another show of the Cardinals domination during the Sunday, Sept. 18 12:30 p.m. gridiron match-up.

The St. Charles Cardinals wasted no time getting things underway. Henry O’Keefe took the initial kickoff all the way to the Irish 8-yard line. Then Brenden Lytle found Sam Pesa on a short touchdown pass, giving St. Charles an early 6-0 lead. Quinn Gillig kicked the point after (worth two points in CYO) and the score was quickly 8-0.

After the ensuing kickoff, the Irish started at their own 35-yard line. The Cardinals’ defense held Central Catholic to 4 downs and out. This gave St. Charles the ball. During this possession the Cardinals connected on a 50-yard pass play from QB Lytle to Sam Pesa (once again). Gillig added the 2-point kick, and the Irish were down 16-0. After a nice Cardinals kickoff, the Irish found themselves starting deep in their own territory at the 14-yard line.

The St. Charles defense held again, and the Irish were forced into a short kick. St. Charles started at the Central Catholic 23. During this possession, Brenden Lytle found a new touchdown receiver in Michael Finley. Once again, Quinn Gillig added the extra points kick, and the score climbed to 24-0. At this point, being down 24 points, it would be easy for a team to get down. The first quarter ended with C.C. down on the scoreboard, but not out of the game.

Central Catholic put together a good drive proving they were not ready to concede defeat. Starting with the ball in good field position at their own 45-yard line, they sprang into action. This possession included a nice 10-yard pass play for a first down, a 14-yard first down run by Louie Tippmann down to the Cardinals’ 18-yard line. This was followed by good ground gains of 3 and 4 yards. QB Brandon Douge kept the ball and rambled for another first down. After this strong offensive showing, it appeared that the Central Catholic Irish were about to put their own points on the board. St. Charles had other ideas. An errant pass was intercepted at the goal line by Brenden Lytle. Lytle followed a convoy of blockers down the sideline for a jaw-dropping pick-6 down the entire length of the field (100 yards) and into the end zone. Central Catholic’s impressive drive was suddenly extinguished. Quinn Gillig (who proved to be Mr. Automatic on the day) booted the extra points. St. Charles, 32, Central Catholic, 0.

St. Charles threatened one more time but a nice interception in the Irish end zone by Central Catholic’s Eli Gernhardt brought the first half to a close.

Under a running clock in the second half St. Charles was limited to one score. That came on a pass play to the Cardinals’ Michael Finley, who caught his second touchdown pass of the day. The PA attempt was good, and 40-0 held as the final score. It should be noted that Quinn Gillig was five for five on his points after touchdown kicks. That accounted for 10 of his team’s 40 points. That is an impressive statistic in CYO play and is a valuable weapon for the St. Charles offense. Another impressive performance came from Cardinals’ QB Brenden Lytle. Lytle passed for five completions in seven attempts for 189 yards, including four touchdown passes. Add to that his defensive interception pick-6 in the second quarter, and it was quite a day for Lytle on both sides of the ball.

St. Charles’ next opponent will be the 2-0 St. Vincent Panthers, whose defense has allowed only 6 points thus far in two games in the 2016 campaign. Meanwhile, Central Catholic plays in the 12:30 p.m. Game of the Week vs. the CYO Knights.

Second game 2 p.m. action on Sept. 18 featured the CYO Knights against St. Vincent. St. Vincent rolled to a 42-6 victory. 36 of the game’s 40 points came in the first half. Two running play scores and one passing score by the Panthers gave them a 30-6 halftime lead. Two additional scores in the second half by St. Vincent proved too much for the Knights. Look for two good match-up games next week.