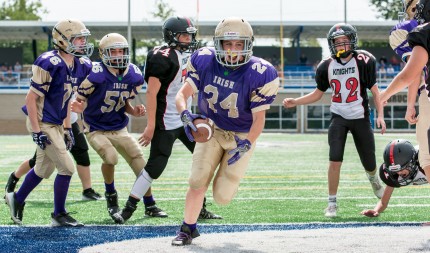 Central Catholic’s Louie Tippmann and his teammates are elated to score a rushing touchdown up the middle late in the third quarter, giving the Irish a lead they would not relinquish. — Joe Romie

Central Catholic’s football team edged out a determined CYO Knights team in a Sept. 25, 12:30 p.m. game at the University of Saint Francis. There were smiles all around on the Irish faces, as eighth grade team members celebrated their first victory with the Central Catholic football program. Victory was sweet, but it did not come easily against the determined Knights.

The Irish had a rough start to the second quarter, with an early 5-yard penalty that was followed by a fumble. The Knights recovered the ball at their own 30 but eventually faced a 4th and 12 situation. In a gutsy call, Anthony Ventruella dropped back to punt and faked the kick, scrambling and breaking tackles to eclipse the first down marker. The Central Catholic defense was forced back on its heels by several good running plays, but they held their ground in the end. The Knights faced a 4th and 15 from the 50-yard line and this time they elected to punt. Eli Gernhardt executed a 20-plus yard punt return to his team’s 45-yard line.

With the halftime clock ticking down, Louie Tippmann ran in a 23-yard touchdown, and the Irish took command with a 6-0 score. The extra points kick failed. With 42.6 seconds left on the clock, it appeared that Central Catholic would take the lead into the halftime break. But the Irish executed an excellent kickoff, so it seemed. The Knights fielded the ball to the 22, and then handed a reverse to Anthony Ventruella, who ran 80 yards to the end zone. Determined to leave the field with a lead, the Knights lined up for the 1-point conversion. Colin Vance took the ball on a running play to score. The halftime score was Knights 7, Central Catholic Irish 6. 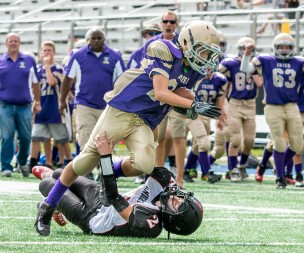 Central Catholic’s Dominic Tippmann charges ahead with the football over Knights’ Colin Vance in the late-third-quarter drive that would result in the Irish’s go-ahead touchdown.

The third quarter brought the only score of the second half. The Knights received the kickoff, and Anthony Ventruella brought it to the Central Catholic 47 yard line. Eventually the Irish forced the Knights into a 4th and 13. They were unable to convert, and the Irish took control of the ball. They wasted no time, and marched down the field to the 9-yard line. The Irish gave the ball to Louie Tippmann, who punched it in for a Central Catholic 12-7 lead. The points after kick was missed, but the Irish owned the lead. The quarter came to an end as the Knights received the kickoff and ran three running plays in an attempt to get a needed first down.

The fourth quarter was made up of several close scoring attempts by both teams, but to no avail. The game was sealed with a Dominic Tippmann interception with only 53.8 seconds left on the clock. The Irish quarterback thrice took “victory formation,” bringing the final score to Central Catholic 12, Knights  7. This proved to be the most exciting and competitive game in CYO play this season.

Irish Coach Keith Douge credited his players for their win. He said he was impressed with the team’s ability to finish plays and play to the end. With the win, Central Catholic improves to 1-2 and the Knights fall to 0-3.

The 2 p.m. game action featured two unbeaten teams: the St. Charles Cardinals and the St. Vincent Panthers. After a scoreless first quarter, St. Charles scored two touchdowns in the second. Holding a 12-0 lead at the half, the Cardinals and Panthers both turned up their defenses in the second half, until a 1 yard run at the start of the fourth quarter resulted in a St. Charles touchdown with 7:49 left on the game clock. The extra points kick was good, and the final score was 20-0.

Touchdowns were scored by Callen Stauffer, Sam Pesa and Devon Tippmann. Brendon Lytle and Sam Pesa each had interceptions for the Cardinals. Cardinals’ Coach Sam Talerico was impressed with the defensive play of Devon Tippmann, Matt Jimenez and Amir Drew. St. Charles improves to 3-0 and St. Vincent holds a 2-1 record. Central Catholic hosts St. Vincent  next, while St. Charles will visit the Knights. Both Sunday games will be played at the University of Saint Francis.