WASHINGTON (CNS) — Vanessa Urbina understands how young people in Central America, not seeing an opportunity for work or a good education, could be attracted to make the dangerous trip north in the hope of a better future in the United States.

“Some live in neighborhoods dominated with guns, violence and drug trafficking,” she said. “It discourages them from wanting to go to school. It closes the door for them.”

As coordinator of Fe y Alegria (Faith and Joy), a training and support program for teenagers and young adults in El Progreso, Honduras, Urbina is working to overcome such negative influences and engender a belief that emigration is not the only option.

The operation partners with Catholic Relief Service’s YouthBuild program, which helps unemployed and out-of-school young people, ages 16 to 24, return to school, find work or start their own business.

Fe y Alegria enrolls 400 to 600 young people in each session, said Urbina, 37, who has been coordinator for more than six years after completing her master’s degree in Taiwan.

The program’s goal is to keep people in local communities so that they can help build a stronger economy in one of the poorest nations in the Western Hemisphere. Students learn various skills in automotive and motorcycle repair, graphic arts, website development, baking and agriculture.

The program is adapted from a model of the same name developed in the United States in the 1970s. Coursework is based on demands of the local labor markets.

Despite Fe y Alegria’s efforts, some students are enticed to leave because their families decide to head north, Urbina told Catholic News Service. Last winter about 20 students — of 467 enrollees — joined caravans headed to the U.S., their fate unknown, she said.

The training lasts up to two years and focuses on developing the skills most in need locally. After completion, Urbina and her staff connect students with local companies seeking to hire people at reasonable wages. Some students even open their own business.

“There are many possibilities because they get a job. They don’t have to leave. They have income,” Urbina said.

“You can notice the difference in the young people from when they start and then when they finish,” she continued. “They are more mature about their future. They want to be a different person. Some of them only know the violence in the towns and when they’re in the program, they change their mind. They think they have a better future. If they have the right attitude, that can be possible.”

Jones said about 80% of YouthBuild graduates find work. He credited the high success rate to not just skill development but also to providing the emotional support young people need to cope in the challenging environment in which they live.

Most young people want to stay in Honduras with their families, he explained.

“They’d much rather stay here because they’re home,” he told CNS. “There’s a saying: ‘Nobody leaves home unless home is in the mouth of a shark.’ When you’re threatened, people don’t have any other choice (but to leave).”

YouthBuild also has been developing an agricultural program for young people. Trainers have encouraged young people to develop new products beyond the traditional crops.

Jones identified beekeeping as an area of growing interest. There’s also an emerging specialty dairy market in which graduates are producing yogurt, cheeses and other in-demand products.

YouthBuild also is training young people to monitor the environment, a need that is growing in a region that is seeing changing weather patterns that has disrupted traditional planting and harvesting cycles.

“We just reactivated a rural high school degree in agriculture,” he explained. “Right now education doesn’t train people to stay on the land in the rural areas. We’ve got to get people reconnected and give young people exciting options where they use technology to create new opportunities and not feel the only action they have is to leave.” 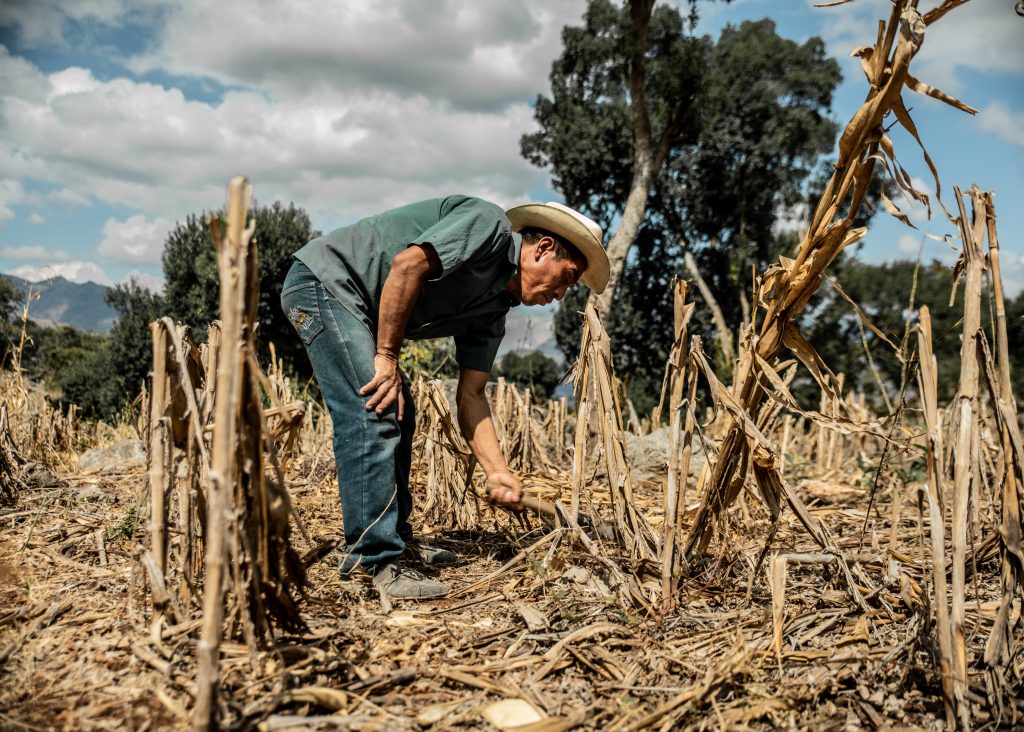 Farmer Silverio Mendez, pictured in a Jan. 30, 2019, photo, lives with his wife, Irma Mendez, and their five daughters and two sons in Barrio El Cedro, Guatemala. Silverio is among hundreds of farmers who are involved in Catholic Relief Services’ Water-Smart Agriculture program, which teaches farmers how to improve soil quality and conserve water in the dry corridor of Central America so they can avoid emigrating. (CNS photo/Julian Spath, Catholic Relief Services)

Elsewhere in Central America, largely in the region’s so-called dry corridor that stretches across 10 of Guatemala’s 22 departments and much of Central America, efforts are underway to help farmers better respond to a changing climate so they are not forced to migrate.

He said the program has moved from watershed management for household consumption to managing limited water resources, especially among subsistence farmers. The evolution emerged because of less predictable rain patterns caused by climate change.

The program also is working on a broader scale, educating urban and rural dwellers about water management.

The U.N. Food and Agriculture Organization and the World Food Program warned in an April report that prolonged droughts and brief heavy rains destroyed more than half the corn and bean crops of subsistence farmers, leading to declining production and more food insecurity. About 1.4 million people are facing food shortages, the agencies said.

In years past, farmers could anticipate when rain would come and prepare their fields appropriately. When necessary, they would borrow money for planting and then pay off the loan when they sold part of their crop beyond what they needed to feed their family. 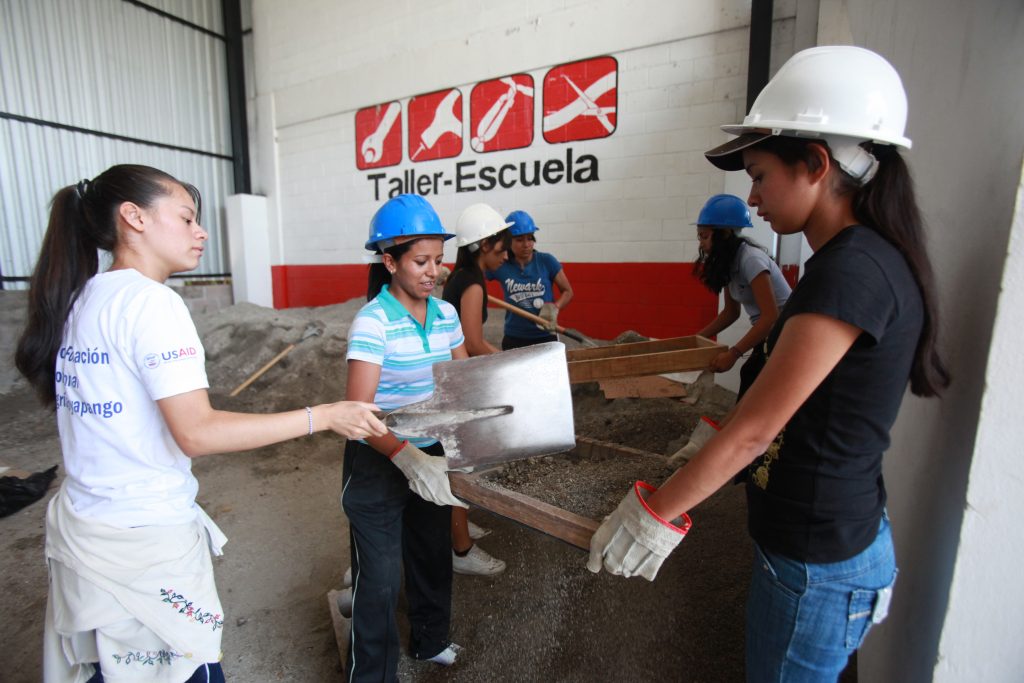 Girls carry out community jobs at the Fe y Alegria program in Soyapango, El Salvador, in this undated photo. The training program is one of about 20 across Central America that partner with YouthBuild, a program of Catholic Relief Services that trains young people in various work skills so they can avoid emigrating. (CNS photo/Oscar Leiva, Silverlight for Catholic Relief Services)

With erratic rain patterns, however, farmers can misjudge when to plant and lose a substantial portion of their crop if they plant too early or too late. With reduced yields a family could face a greater risk of hunger or a loss of income. Further, common illnesses such as infectious disease, diarrhea and pneumonia compound hunger. Such a situation can fuel emigration to the U.S.

Under ASA, McQuillan said, farmers are learning about crop rotation, cover crops and other practices that hold water in the soil and limit the impact of inconsistent rainfall.

McQuillan said the practices farmers are implementing seem to encourage farmers to “stick it out.” “One coffee farmer told us that he was thinking about leaving, and the last three years the yield has increased so he’s working at it,” McQuillan said.

ASA also has begun discussing how to more effectively use satellite data and other technology to the benefit of farmers. For now, McQuillan said, local efforts will concentrate on tracking rain and weather patterns to aid in the hope finding the optimal time for planting.