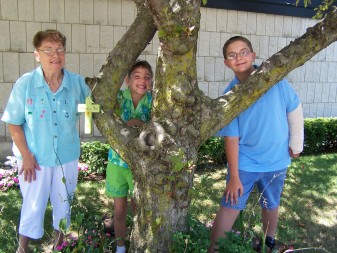 Cathy Williams, left, and her two grandchildren Issabella and Brandon, share many fun stories about their times together the past few years.

MISHAWAKA — Terri Ann, the fifth of five children and only girl, was affectionately known as “the brat” in the Williams family. Known for her mischievous ways as a youth, she often tested her mother Cathy Williams’ patience. But later as a young adult, Terri Ann would carry a new label; the child who never gave up her faith in her battle with cancer. And Williams’ status would later change from grandmother to “parent” of her grandchildren Issabella and Brandon.

Terri Ann first went to the doctor because she had hurt her knee. She underwent an MRI and discovered that she had cancerous lesions throughout her body. The cancer originated in the breast, but there were no lumps when it was discovered.

“The day we went to the oncologist was that day I realized how strong this little “brat” really was,” Williams recalls.

The oncologist told Terri Ann it had metastasized in many areas of her body. During the next two and half years Williams remembers that the nurses and other patients were always amazed with Terri Ann’s ability to remain positive through her pain and trials. “They called her sunshine, because she always smiled,” says Williams.

A later MRI discovered six brain tumors. Although radiation removed 80 percent of the tumors, the doctors could not remove the tumor in the frontal lobe. At this point Terri chose hospice care at home and died on Aug. 28, 2007 at age 38.

Williams remembers the initial loss of her daughter and the responsibility of raising her grandchildren leaving her overwhelmed. “I put my life in God’s hands. If I hadn’t had my faith, I wouldn’t have got past day one,” she stresses.

The clergy at Queen of Peace Parish were a vital part of Williams, Issabella, and Brandon’s emotional recovery. Father Richard Hire baptized Issabella during the period when Terri was fighting cancer.

“It was the most beautiful day, even though it was snowy outside. Terri Ann struggled to stand up to be a part of the ceremony,” says Williams. “Issabella was a little frightened when she got to the font, but Terri reassured her and Father Hire proceeded,” she adds.

Shortly before Terri Ann died, Father Dan Scheidt was appointed as the new pastor of Queen of Peace and later officiated at her funeral. Williams, Brandon and Issabella remember a Sunday homily where Father Scheidt talked about the importance of community in strengthening the church and its parishioners. “I think of Father Dan as an uncle,” says Brandon.

During the past two years following Terri Ann’s death, Williams has kept her memory alive through activities with Issabella and Brandon. In preparation for Issabella’s first Communion, each child was asked to make a banner.

“Grandma and I decided we should put mom on there, so others could see how much I loved my mom. We put a sun on there so that we could have sunshine (her mother’s nickname from the nurses),” Issabella remembers.

Williams adds, “It was a beautiful banner. In addition to the sun, the banner had a picture of a girl and her mother with angel wings.”

Terri Ann’s fearless spirit was kept alive in Brandon’s sixth-grade science project at Osolo Elementary School in Elkhart. Brandon tested a large and small sled on a snow covered hill using a small and large person on both sleds. His hypothesis was the large sled carrying the large person would go down the hill the fastest. Williams used a stop watch to keep track of how many seconds it took Brandon and Issabella to go down the hills on each sled.

“Now mind you, it was 10 degrees below zero outside and the wind was blowing, but we were having the time of our lives!” she laughs.

Brandon relishes the memory of getting his grandmother down the ice covered hill to do the sled time trials. “The ice was so bad that I had to have Grandma ride down the hill with me to get her to the bottom. And she was holding on for dear life!”

In the end, Brandon’s original hypothesis proved wrong; the smaller person on the large sled went the fastest down the hill. But all of their efforts paid off as Brandon was awarded first place in the school science fair.

Williams’ advice to someone going through a challenging life experience is to look inside your heart and know you are not alone. “Smile more and take a few minutes out of your day and ask for God’s help.”