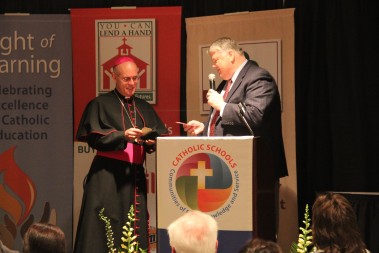 Bishop Kevin C. Rhoades purchases a You Can Lend A Hand coupon book from Deacon Jim Fitzpatrick of Quality Dining. Each year, the company sponsors the Light of Learning Awards, which honors Catholic School educators and two administrators who express core values of Catholic education and incorporate those values into their curriculum. The luncheon also marks the beginning of the You Can Lend A Hand coupon book campaign. Quality Dining has raised more than $10 million for area Catholic schools since 1982.

The following is a copy of the speech given by Bishop Rhoades at the Light of Learning luncheons in Fort Wayne and South Bend during Catholic Schools Week:

Every year, I look forward to this Light of Learning luncheon during Catholic Schools Week. It’s an opportunity to come together to celebrate our Catholic schools and to honor those who make our schools excellent, our teachers, principals and benefactors. I wish to extend my deep thanks to all of you and my personal congratulations to all who are being honored today.

I have often said in my speeches and writings on Catholic education that we need our Catholic schools today more than ever. I often say this for various reasons. I’ll often mention the growing secularization of our culture, moral relativism, and other currents that are having a negative effect on our young people and their faith. Today, I’d like to again speak about why we need our Catholic schools today more than ever and why I hope that we will increase the enrollment in our Catholic schools. I’d like to do so today in light of statistics, specifically the well-known results of the Pew Research Center survey that were released last year.

As you probably read, the Christian share of the U.S. population is declining and the number of U.S. adults who do not identify with any organized religion is growing. We see this drop in Christian affiliation more pronounced among young adults. This decline has been going on for some time, but it is particularly alarming that the pace of decline is picking up. Between 2007 and 2014, in just seven years, the drop was 8%. The number of Christians in the United States fell from 78.4% to 70.6 %. Over those seven years, the number of those who identify themselves as religiously unaffiliated (the religious “nones”) increased from 16.1% to 22.8%. Most of the decline in the Christian percentage is among mainline Protestants and Catholics, with a decline also among evangelical Protestants, though at a slower rate.

As I mentioned, the decline is most acute among young adults, the so-called millennial generation. 36% of young millennials (those between the ages of 18 and 24) are religiously unaffiliated. 34% of older millennials (those between the ages of 25 and 33) are religiously unaffiliated. This is a great challenge for the Church. I think a lot about this age group and the need to strengthen our ministry to and with young adults. It is alarming to me that only 16% of millennials identify as Catholic, lower than the estimated 20.8% of all U.S. adults who identify as Catholic, which itself is a decline in the overall adult Catholic population by 3.1% the past seven years. There are now more “religious nones” in the United States than there are Catholics (22.8% vs. 20.8%). 25.4% are evangelical Protestants and 14.7% are mainline Protestants. 5.9% of U.S. adults identify with non-Christian faiths.

I don’t mean to overwhelm you with statistics. Looking at the whole, the largest religious group among adults in the U.S. is evangelical Protestant, followed by the religious nones, followed by Catholics, followed by mainline Protestants, followed by non-Christian faiths. A couple other significant things to note are the following:

Racial and ethnic minorities make up 41% of U.S. Catholic adults, a significantly larger percentage than that of both evangelical and mainline Protestants (24% and 14% respectively).

While 22.8% of American adults say they belong to no religion, only 3.1% are atheists and 4% are agnostic.

There has been a lot of discussion about the results of the Pew survey and various interpretations of those results. I don’t have time to talk about the various viewpoints, suggested causes for the decline in numbers of Christians, etc. I only present these statistics in light of my assertion that Catholic schools are needed today more than ever. I don’t have statistics about how the numbers of U.S. Catholics who attended Catholic schools compares to those who did not regarding their affiliation later. In any event, the main thing I want to point out is that we must be especially cognizant, in light of the statistics, of the identity and mission of our schools. They must be communities of evangelization. They must face the challenge of the diminishing Catholic and Christian population and of the growing number of religious nones. This raises a paramount issue: the education and formation of our students as committed disciples of Jesus Christ.

Last week, during my visit to Bishop Luers High School, I met with the senior class. One of the things I spoke to them about was the decision to be a disciple of Christ as they prepare to graduate. They will enter a culture in which so many young adults are choosing to disaffiliate with their churches and join the rising number of religious nones. I hope and pray we are forming intentional disciples who are ready to enter the world with a strong faith that will withstand the assaults of secularism and relativism. In this changing religious landscape of our country, a landscape becoming more like Europe, we need to be agents of the new evangelization in our schools so our young people are formed as committed disciples of the Lord and faithful members of His Body, the Church.

Some might say we just need to continue doing what we’re doing. I think we’re doing a good job, don’t get me wrong, but we can never settle into the status quo. If we do, we won’t be excellent. We will settle into mediocrity. In the face of the changes in our culture, we must be creative, intentional, and attentive to outcomes concerning  our mission. The #1 outcome we should be looking for is our young people’s commitment to the faith. It’s related to what should be the #1 outcome we all should be seeking: eternal life and salvation.

Our Catholic schools are communities that live and act with the fundamental conviction stated so beautifully by Pope Francis: The joy of the Gospel fills the hearts and lives of all who encounter Jesus. Those who accept his offer of salvation are set free from sin, sorrow, inner emptiness and loneliness (The Joy of the Gospel #1). That is our aim: that our children and young people experience the joy of the Gospel by encountering Jesus in their minds and hearts. Various studies have shown a general sense of disorientation especially among youth and young adults today, a disorientation resulting from a rejection of the transcendent, a growing deterioration of ethics, a steady increase in secularism and relativism. The superficiality from an information-driven society affects our young people in a significant way. We are called to teach them to live life in a profound way, the way of Jesus Christ.

This is our first and most important task: evangelization, proclaiming Christ. Pope Francis teaches us what this means: Proclaiming Christ means showing that to believe in and to follow him is not only something right and true, but also something beautiful, capable of filling life with new splendor and profound joy, even in the midst of difficulties. There is an inseparable bond, our Holy Father teaches, between truth, goodness and beauty (The Joy of the Gospel #167). That’s why we need Catholic schools. We need schools of the Gospel, schools of truth, goodness, and beauty. I pray that our students, presently and after they graduate, will choose the path of Christ and live life on this higher plane. I pray that they will not only not become “religious nones,” but that they will bring to their peers who are not affiliated with religion “the joy of the Gospel.”