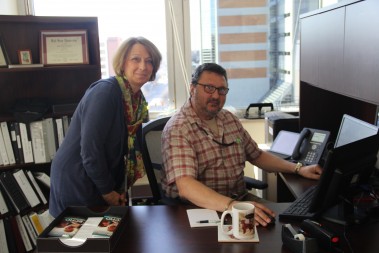 Lewandowski brings a plethora of gifts and talents to the table at Catholic Charities with his unique background in counseling psychology and IT expertise. His strength, he says, lies in his organizational and analytic skills. “I’m good at making things run, making new programs, data analysis,” he says, adding, “I’m the man behind the curtain.”

Holding a bachelor’s degree in psychology from Purdue University and a master’s in counseling psychology from Ball State University, Lewandowski brings with him experience from a diverse career background ranging from clinical work in an acute psych unit and developmental center to teaching at the University of Saint Francis and private practice. He spent 16 years at SCAN (Stop Child Abuse Neglect) first as program administrator and then as operations administrator.

Lewandowski is happy to be at Catholic Charities where he can get to know the people. His vision for the future of Catholic Charities’ mission? “I see this as growing. There are good people here, so dedicated. We’ll expand. We have room and are structured better for expansion,” he says confidently.

With his military family background he adds, “We moved a lot. So I can adapt to anything. I look forward to the challenges.”

Lewandowski and his wife Deb of 40 years are long-time parishioners of St. Vincent de Paul Parish in Fort Wayne. They have two grown children, three grandchildren with their fourth on the way, and three dogs.

Bobbie Golani’s new position as clinical director at Catholic Charities is a “positively great fit,” she says, referring to her rich administrative experience. She is humbled to work with the dedicated staff at Catholic Charities who serve the at-risk population in the area. Originally from the Detroit area, she and her husband Lee have been residents of Fort Wayne since 2007. They have two grown children.

Armed with a bachelor’s degree in early childhood education from Oakland University in Michigan, Golani spent several years as a teacher and administrator in the Detroit area. Hoping to serve on a more holistic level she earned a master’s degree in social work from Wayne State University in Detroit and became involved in a successful pilot program for at-risk children.

With her move to Fort Wayne, Golani took the helm at Martin Luther King Montessori School as executive director and then clinical administrator at SCAN. She has also served in private practice.

As clinical director Golani will be overseeing staff working in the ECHO (Education Creates Hope and Opportunity) program, Hispanic Health Advocate services, Resource and Referral Services and SCSEP (Senior Community Service Employment program). “I have two amazing supervisors,” says Golani, adding that she will “supervise the supervisors” for compliance with mandates and requirements for each program. Her hope for the future includes building new programs to support the diocese, parishes, parishioners and the community at large.

“I’m excited to have the opportunity to be here and do the work in the community,” says Golani. “It’s all about the people.”